Seems like Fusion360 is getting a lot of votes, might be time to knuckle down and work out how to use it. Though I will go have a look at FreeCAD too.

Fusion is a heavy lifter, essentially Autocad Inventor except it is cloud based instead of local, and doesn’t cost thousands for personal use. That free for use release doesn’t include all the extensive parts/hardware libraries, or the non-destructive testing capabilities that come with a paid seat license.
Lars Christensen does good YouTube tutorials on it. Some of them are old enough that the UI has evolved a bit, but the fundamentals are there.

Fusion is a heavy lifter

That’s an important point. It has a steep learning curve, but you’ll probably never encounter a situation where it can’t do something you need - and there’s probably a video or online help page to work thru it.

Yeah, I took classes for Inventor back when it was new, and was blown away by the non destructive testing. Identify points of stress virtually in a component before you ever touch materials or tools. Big change from the time and expense of producing an item and abusing it to the point of failure to determine its limits.

except it is cloud based instead of local,

It offloads a lot of stuff to the cloud but runs most basic design functions offline, so I’d call it “hybrid.”

I did start playing with FreeCAD a little and, it seems like a viable tool for this sort of thing. The general concepts and what things are called are mostly transferable with Fusion360. I haven’t quite got to making anything parametric yet because I got distracted with other things. I thought I would post, though because the Hackspace Magazine people just released a book on FreeCAD for Makers. As is their tradition, the PDF is freely downloadable. 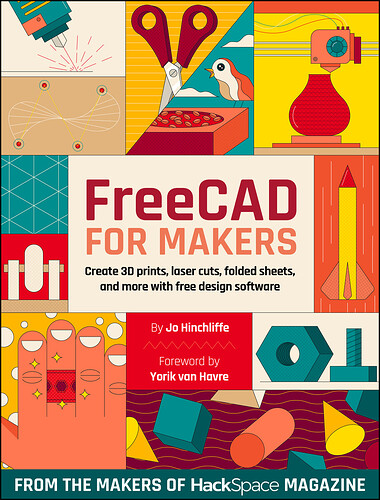 FreeCAD is the number one free software 3D design program, and this PDF guide is the best way to get started with it. We'll take you from absolute beginnner to advanced user, going from the basics of drawing a line and making it 3D all the way to...