Hey guys & gals…those of you who have a 3D printer (the FDM plastic printing kind)…I just got an opportunity to test out the new eSUN PLA PRO filament, (aka PLA+) - and it is “some kind of sweet”!

Definitely one you want to try if you regularly print PLA…it’s stronger and slightly more flexible than regular PLA, and the price is very reasonable.

I put a write-up in the reviews section over at Amazon, with a few of the tests I ran. It’s like PLA, but better. (Their ePC is also very popular on the M2 forum - I haven’t printed it yet, but the folks who have say that it warps a lot less than regular polycarb. Same for the ABS+) 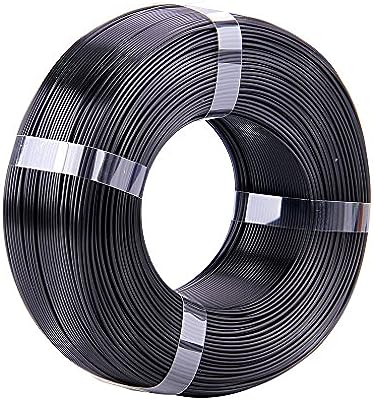 I’ll second that recommendation — I’m just finishing my first roll of eSUN PLA+ and have been quite pleased with its strength and “printability.” At just $2 (US) more than their standard filament, it’s well worth it.

Last time I needed to get more filament the eSun name was highly regarded, so I got a few reels from them (not sure if they were + or not… haven’t used them yet).

How does the + handle storage? More or less in need of dessicant and/or drying out?

Good to know. I’ll have to run through some more of my current supply. (Have you seen the new stuff from Makergeeks that’s supposed to be PLA but dishwasher and autoclave-safe without sagging?) I would love to start combining printed stuff with lasering of fine detail.

Don’t know - hasn’t been out long enough yet. I’m sure desiccant in a sealed bucket would be a good idea. (My regular PLA goes humid brittle after a few months if I don’t store it in a sealed bucket, but it’s always pretty humid around here, even inside with central A/C.)

Learn everything you need to know in order to print your first 3d printing  project.

Like I said, haven’t tried it yet, but it’s tempting. (after all the other tempting things)

Another vote for desiccant on almost everything, especially PLA. Last summer I started wondering why my prints were suddenly complete garbage, and then I realized that in the winter humidity here is about 7%, in summer about 77.

For any of us Canadians who want good filament
http://www.reprapwarehouse.com/

Its the only company that has called me after every order to make sure everything was right. The owner will bend over backwards trying to find what you’re looking for

Huh! Bookmarked that…I wonder what they put in it to make it heat resistant?

Your guess is as good as mine. They’ve been playing with weird PLA variants for a while. Some of their stuff runs at 220-240 so you can swap it and ABS without changing settings.

I had HIPS recommended to my for my LULZ Bot, anybody used both the PLA and the HIPS and can tell me which they like better? And why? I’ve had issues every once in a while with delamination on big prints but otherwise it’s been great.

I’ve never used HIPS as support, (which dissolves in limonene), but one of the experts over at the M2 forum did try it once…i don’t think he was overwhelmed by it. (Matter of fact - that’s one of the guys that prodded me into buying the GF…maybe he’ll chime in…

I’ve used PVA as support for PLA (the water-soluble one) and I’m not crazy about that either. It sticks to everything except what it’s supposed to stick to. (Just horribly messy to work with.)

Do you have a dual? What i like is PETG as support for PLA and vice versa. The two kinds of filaments do not bond to each other at all, and they make for fantastic support for each other. You can do a zero horizontal separation for them and get really great support for the main print.

Support printed with either of those doesn’t dissolve at all, but it snaps off easily. (So if you need to dissolve some support out to remove it, you’re unfortunately stuck with the other two options.)

No!!! It’s so hard to be patient and use up boring supplies before you can get pretty ones. Sigh. God’s speed, madam.

I don’t have a dual so I’ve had to flex my engineering/designing muscles to get away with printing things that don’t require support (which in turn will end up being a useful mindset for designing things for the Forge). Makes for fun problem solving at least. My plan had been using the HIPS as my part material so I can prototype things out and make sure it all works correctly before buying any of the more expensive filaments, which dissolved into buying more reals of HIPS than I’ll ever be able to use. I’ve heard the HIPS is an OK support for other things but like you said that requires the dual head which doesn’t seem worth the price to put on my mini. When I upgrade to the TAZ I will likely get the dual. Thanks for the advice!

PETG is my go to filament but I will definitely try this as I am fully convinced that there is no best filament, just best for a particular application.

I’ve had a roll of ABS since day one…it’s never been out of the package. I use the PETG instead.

PETG is one that I like a lot for the strength and the non-stinky aspect, but that one took the longest time to dial in! (Very sticky filament with a lot of issues, and a terrible bridger.) But if you can get it set correctly…it prints like a dream.

I have done HIPS+ABS. It was decent, but does take AGES to dissolve. I didn’t like dealing with the dual extruder and had never dialed in that particular printer because of it, so I don’t have extensive experience…

But I did use the HIPS as just filament (not dissolving support), and liked it better than ABS. Basically the same, but the end result was stronger IMO.

I had heard basically both of those comments from the friend of mine who uses a printer a lot at work, so I’m glad to hear it seconded. I got grey, and then blue and then green and then purple and then realized I was never going to be able to print 4 kg worth of stuff and had to put my credit card down. It’s great stuff, but it’s all I’ve ever used.

I am hating @Jules right now for the PETG+PLA comment

Yeah I’m in the same boat as this but from for me it’s because I REALLY want the new TAZ 6 with the dual head but who just has $3000 laying around to up and buy a printer? Sigh. Soon hopefully.

Chuckle! Time to fire that puppy up!

Join e-Nable and use that stuff to print prosthetic hands for those who need them but can’t buy them. I go through a fair amount of it (ABS though - I’m partial to its durability). Sometimes I go through it because I’ve got a full plate build I start before bedtime and then I awaken to an 8hr air print