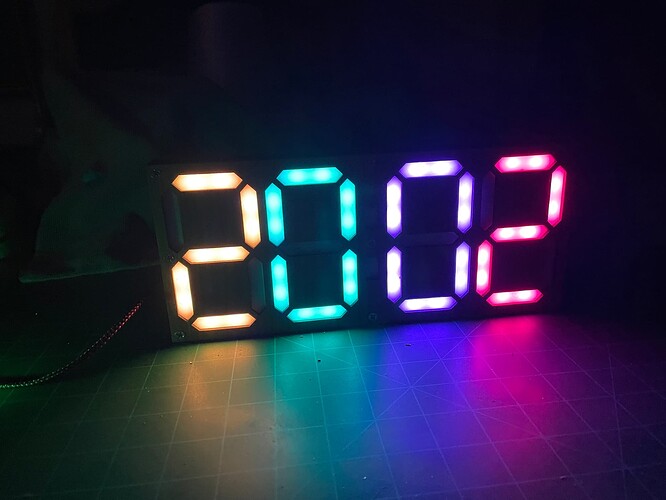 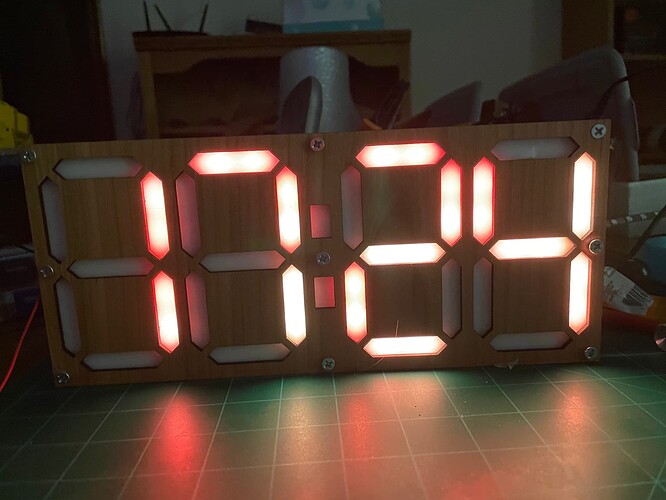 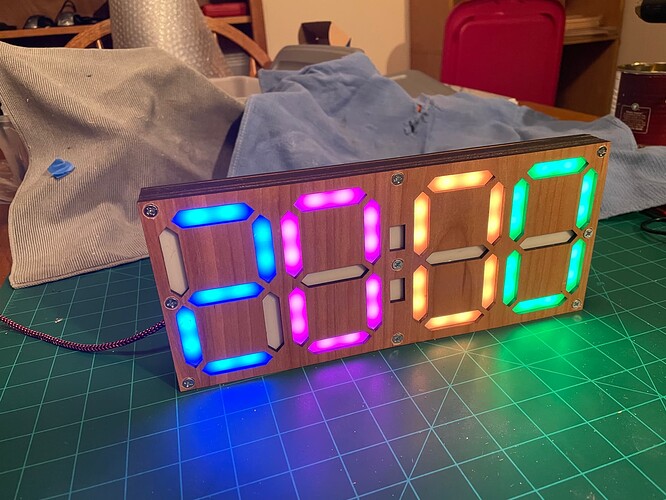 My larger six digit clock used some 3D printed parts. I decided to try another one but this time making all laser cut and using Proofgrade and the useable bed area efficiently. There are several ways to orient them to get most use out of it, but this one is sized to be able to use one sheet of Proofgrade plywood and some acrylic.

I think this may be the project that will help me get a custom circuit board done that fits in as a complete layer. So it’s a good goal to figure out the design software for a board and see what it would take to get it assembled or do surface mount stuff. Maybe that would be the use case for a pick and place from Stephen Hawes. 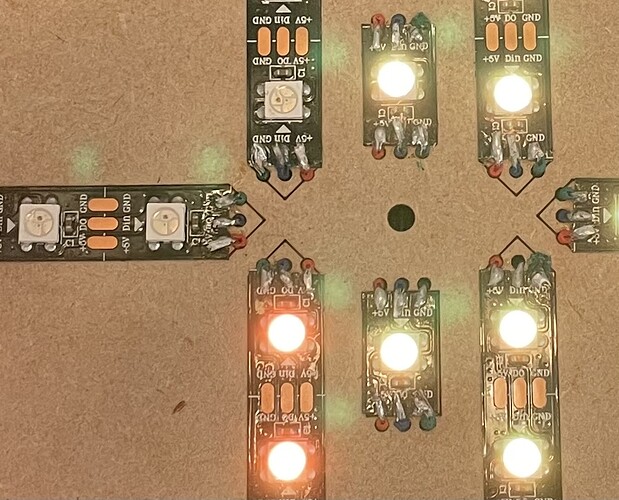 One design feature that I introduced was to put holes for the wires to go through the board up to the surface. It made the soldering go a bit easier but most important kept the wires out of the way of the LEDs and made it easier to assemble and complete the wiring. 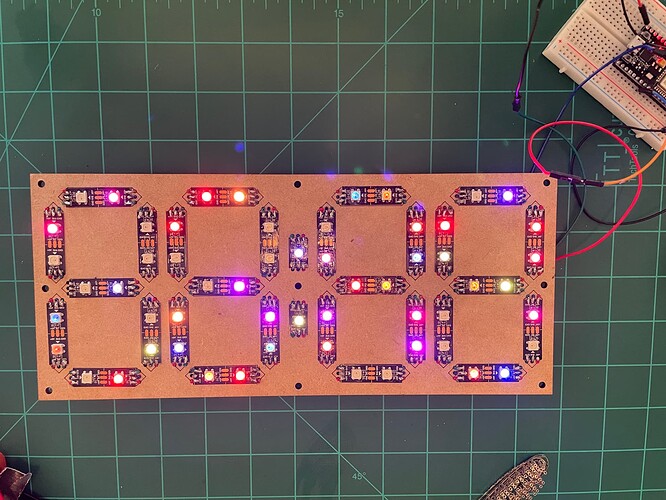 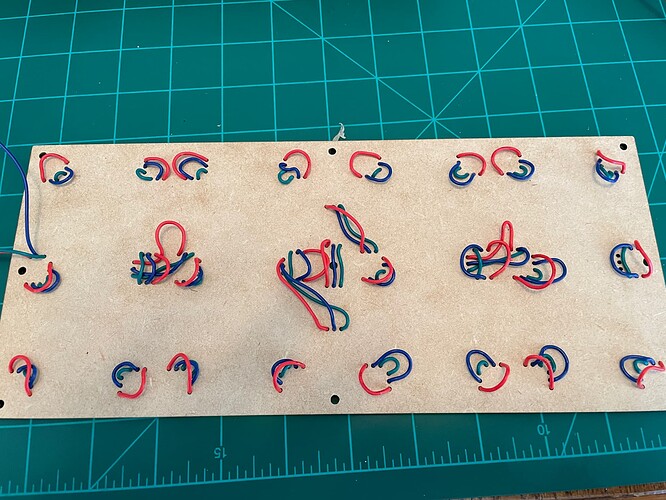 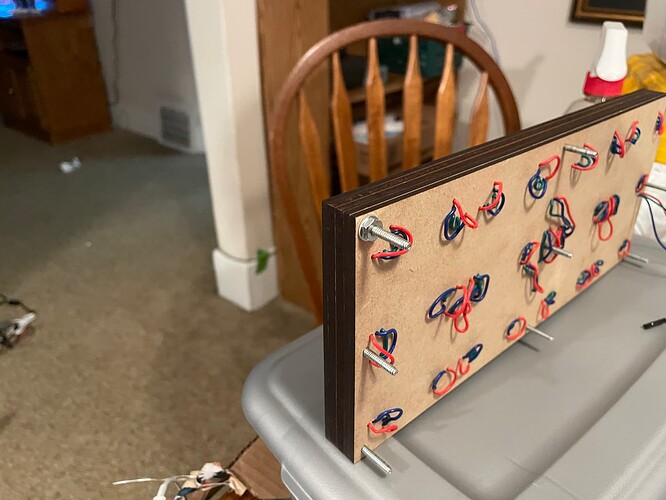 image1920×1440 160 KB
Wasn’t too consistent with my wire lengths, but it worked. Quite tedious to prep 174 wires. The threading through went just fine and soldering was easier, if not neater. 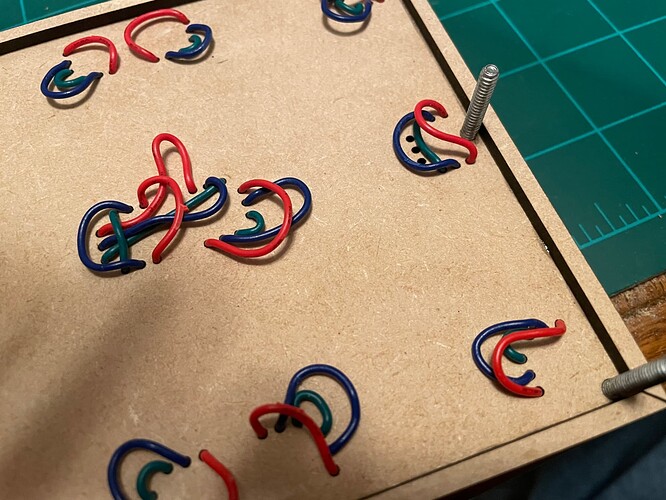 I cut some draftboard frame pieces to make a spacer layer. That worked well. I didn’t want to burn a section of Draftboard to make the full piece with middle cut out to allow room for wiring. But that spacer layer would be in a final design. 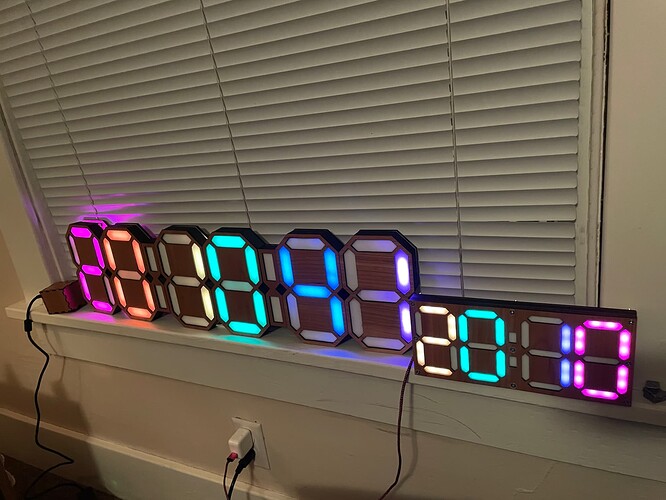 Here it is with the big brother. 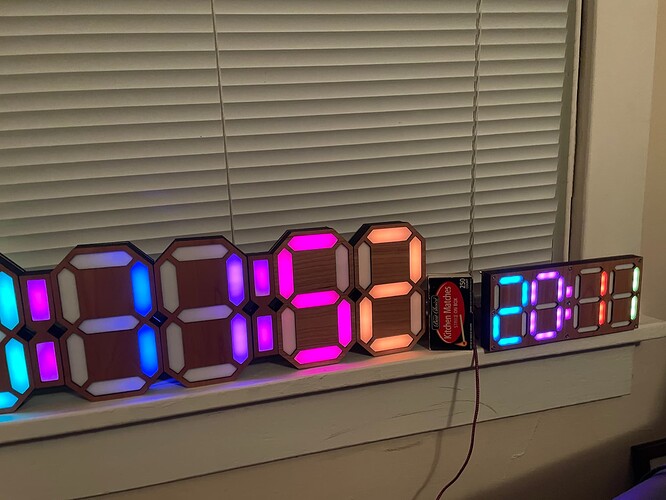 And here it is with a kitchen match matchbox for scale. No bananas at the moment. 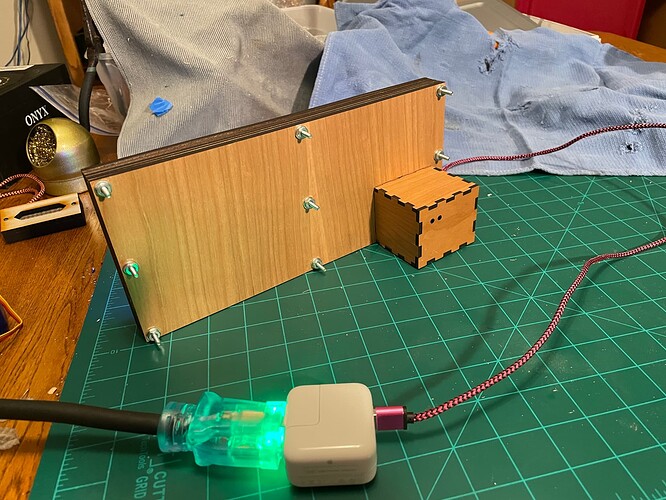 Here is the back. I mounted the project box to the back. The number of LEDs allows me to use an iPad wallwart to give enough current. A little more convenient that a power brick. 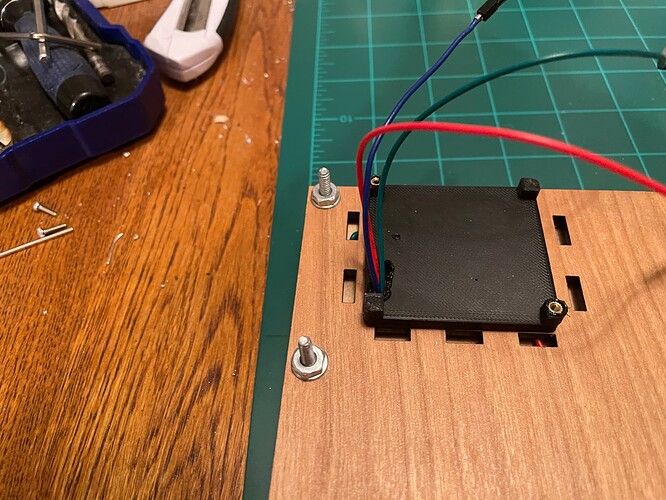 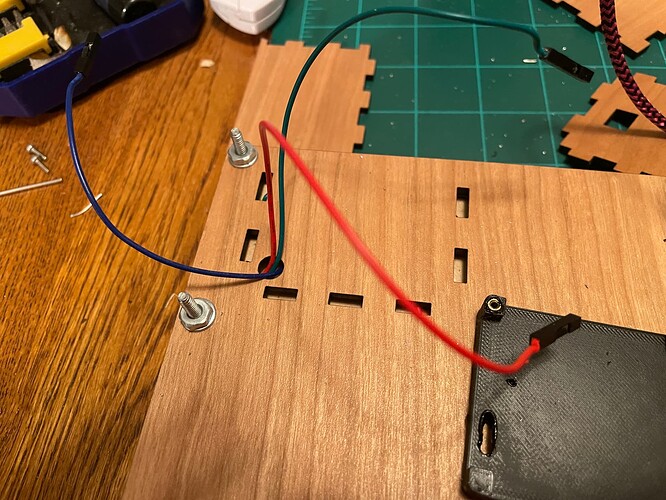 While it is just fine to have the two LEDs per segment recognizable, I do think the effect is better if the lenses are uniformly lit. I need to either get a more opaque material (used white acrylic) or at least put another spacer layer between the lenses and the LEDs to get them farther back. Right now there is just one layer spacer between LEDs and the lenses. I know I could get something to diffuse better, but Trying to simplify this design and cut down on materials. Will do some testing to see what I can come up with.

Again, I think I have found a project to focus on to challenge my electronics skills to get to the next level. I like the program. It works just fine. I was able to reconfigure it for 2 LEDs per segment and rearrange the layout trace of each segment. Loaded the sketch and it set the time and was off and running. No problems there. However, some of the designs floating around allow for remote access to different functions and colors. It would be good to get the temp and humidity and the light sensor all integrated into it, plus some other functions like a timer. Programming something like that is beyond me, but there are some projects around I might be able to use. Most use Android apps and I have an iPhone. Maybe a web server which is browser agnostic.

I absolutely love this project. I’ve always been a sucker for big clocks and timers in movies.

I’m so glad you did it! I want to do one of those, but the idea of all that soldering just makes me want to lie down.

Challenge met. What a great result. Thanks for the photos (especially that video) and the write up.

I am glad that you had such a good time

I am nowhere near able to start down that rabbit hole or understand the details, but I really admire your accomplishment in getting there.

I am nowhere near able to start down that rabbit hole or understand the details, but I really admire your accomplishment in getting there.

Love everything about this project!!! Thanks for the pics and write up.

Looks great and a really great comprehensive write up.

These are great! Love all the color and the video.

I’d not enjoy the wiring … fiddly, of course … and “seeing” what I’m doing.

The wiring is a deal breaker for a lot of people. For the time being, I am seeing it as an opportunity to learn how to solder efficiently, effectively, and neatly. I still have a bit to go on this front, so that’s ok. I think I could do one more of these without going nuts. Then it’s definitely time for a circuit board.

These are works of art! I wish I could have one in every room of my house (I hate wearing a watch).

Ok. The next step for this project:

Love this project! Long time ago sparkfun or someone did a large 7 Segment display wall clock, like 12x24" segments… Always wanted to build that project, got the hardboard, diffuser and foam board all cut out but wanted to use pixels instead of dumb strips for the lights so sidelined to project since pixel strips were just coming out and then I didn’t have time once they arrived to finish assembly. Pile of parts is still up on the shelf. With these posts I might have to just dust it off and update it.

Found the link, Well now I guess I also have to admit its been a LONG time on the shelf as it was posted in 2006…

The WS2812 LEDs make these projects fairly simple. It’s all in the programming, and the job of connecting the LEDs somehow. Would love to see you do this. That size would be awesome.

Yeah, The strips I have are TM1809. Much has changed since then.