A tale of two wolves

I wanted to experiment with two colors of wood so I took a design I found online and did some extensive editing and added a custom filigree border in Illustrator. Really happy with how they turned out. Used Proofgrade Walnut and Cherry. Cut a separate piece to make a backing and converted the keyhole hanger to be fourway to allow different mounting options since it is circular. 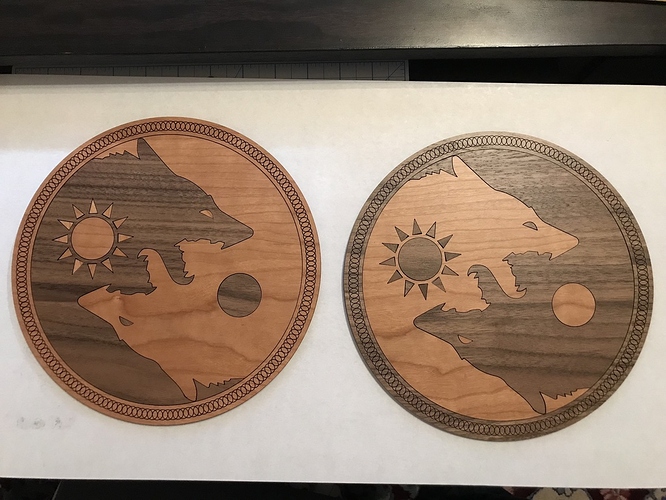 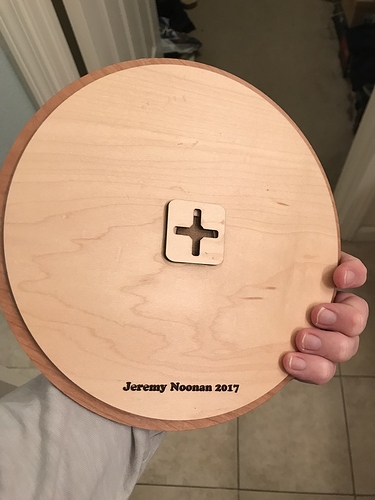 Looks great - lovely work! I like the 4 way hanger too, great idea!

Very nice. Without the second photo I thought they were coaster sized. I really like that they are wall art.

They really need to start shipping

so we can all take photos with a known scale.

Sweet! They turned out great!

That really turned out very nice!

The title, and the piece reminded me of the story told to a Son of two wolves in constant battle with each other within us all, one positive the other negative. The Son asks which one wins?
“The one you feed”.

Looks fabulous. I especially love the border as it adds another layer of refinement. As an unsolicited suggestion, I wonder if the second circle wants to be a crescent moon. I’m sure that you meant it to be a moon, just think a crescent makes it a touch more obvious.

Yes! That was a partial inspiration for this design. The second of the two is going to a friend who runs a therapy program called “Feed the right wolf”

That’s a great suggestion. I plan on making more as there has been a lot of interest from the folks I’ve show in too.

Kind of a Native version of Yin/Yang. Two for one, the inlays make it, plugging right into each other!

Love that tale (2 wolves), and LOVE this piece! Nice work.

Fantastic job lining up the grain. It almost looks like one species in some spots.

Neat idea making the keyhole hanger 4-way. Now you just have to figure out which way is up

Very well done. I’ll be using this. Great tie in with scouting as they have “Akela” the wolf. Excellent job.

Love it! (Sometimes you just feel the need to howl, KWIM?)

Great project!
Did you just use the two cuts to make inlays in the opposite piece? I’m guessing that you did, but they seem to fit so well with little kerf gap.

Yes, I made sure when prepping the design in Illustrator that the circles were exactly the same for the sun and moon, and that all the triangles for the sun were duplicates of each other, simply rotated. I then cut out the same exact pattern on walnut and then cherry. Taking the tape off was…“fun” for all the fiddly little bits, but they slotted perfectly into each other like a jigsaw puzzle.

I LOVE how this came out. I’ve always been a fan of the two wolves story.

This is really cool! What’s the diameter on it?