Hi,
I have attached an AC Infinity 6" fan and turned off the Glowforge fan, and now when I cut anything that gives off a little smoke (like wood obviously), it seems to me that more smoke is collecting in the Glowforge before the fan pulls it out, and I have it turned all the way up now.

I know there are other people using this fan. Is anyone else having this issue, and have you solved it?
Thanks!

Got any pics of your setup?

What model glowforge do you have? Removing the existing fan is the best way to get good performance, but it’s way easier to do that on a basic than a pro.

How many turns do you have in your vent hose? It will be slower the more turns you have.

Here is an image of the fan with hose setup. I had it setup slightly differently originally, right behind the Glowforge, but then that compacted the hose to GF – but the problem was the same. Seemed like more smoke than the GF fan accumulated. 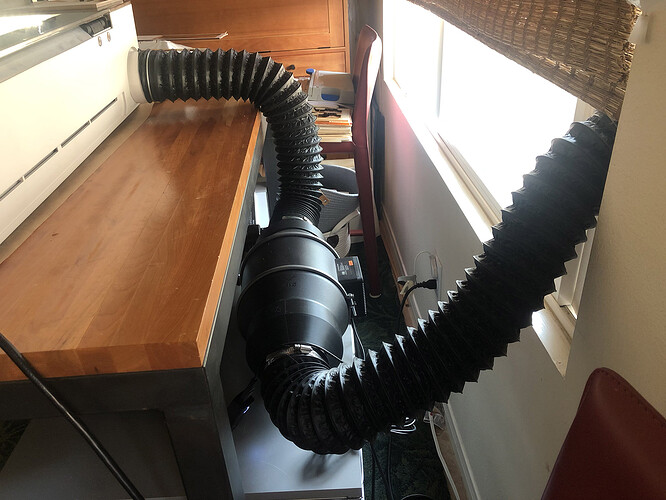 Thanks for the reply. Just posted an image of the setup.

since it looks like there’s room for it behind the GF, i’d consider moving it up on the table behind the GF. that would eliminate a lot of bending. it would be more like two instead of four, since the table the GF is on is fairly level with the vent hole in the window.

but then that compacted the hose to GF

You might consider switching to hard pipes… and I’d make the exhaust 6" wherever possible, as in immediately convert to 6" off the back of the glowforge and stay 6" the rest of the way.

The hard pipes increase airflow because the folds in flexible duct introduce drag. 6" pvc pipe would be more efficient.

On top of the other good advice you received, I would just like to ask how long have you been using the fan?

If you have it set up with minimal turns in the hose (and no leaks), and there is no gunk blockage (either in the exhaust fan, external fan, or the location you vent out from-my window screen gets dirty and needs to be cleaned too), it’ll be a huge difference with how quickly the smoke is removed.

One other suggestion - since you have slack in your hose, move the fan closer to the window. The more the fan is pulling air instead of pushing it, the better for getting air out of the Glowforge…

Other than having room to shorten up those hoses, the setup looks fine to me. If you run it at full speed, that should be clearing the smoke from your machine. I would look to see if the grate on the back of the Glowforge is clogged up with debris. The fan and grate behind it have to be cleaned occasionally or they’ll block air flow. And same with the other end of wherever this hose goes, whether that vent cap or screen or whatever’s at the end is clogged up.

P.S. This is what that fan looks like inside after 4 months of cutting draftboard. Luckily, it comes apart for cleaning easily. Just unscrew the two metal clamps around the body. The fan is held to the motor by a single bolt through the middle. 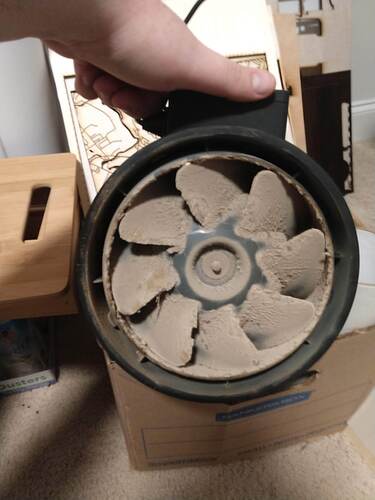 Once I managed to get my exhaust run completely sealed, the only issue I’ve had with smoke was when the fan grill was blocked with debris. Just poking it will loosen it and you can suck it out with a shop vac.

I just decided to remove that obstruction, along with that screaming fan. 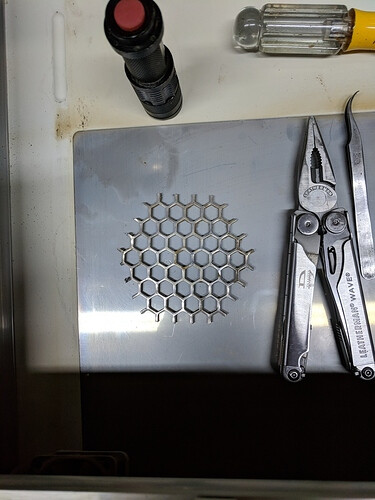 Be advised that if you modify the machine like this the repair facility may not be able to service it for you.
When the machine is breathing properly there should be zero smell during operation.

Greetings, I received my GF Pro today. Yay! Very excited. I just finished my second “getting started” project. I took two steps forward and installed the 6" Cloudline series right off the bat. Had done enough reviews in the forums to warrant the “get it now” option. I mounted mine on the table directly behind the GF. Originally I had installed a Amazon purchased blast gate only to discover it is not sealed enough. gift of good measure spewed smoke through the blast gate seals where the metal sections are screwed together. I’ve seen the free GF blast gate design in the forums. Will try that next. I removed the blast gate after the first project was done. Burning wood is one thing but toxic chems in the air, no thank you.

My second project, gift tag went better, but on occasion I did catch a whiff of smoke now and again. I had turned off the internal fan on both projects. I feel the vent tubing screw clamps and the 4" clamps that come with the GF do not offer a 100% seal. Aluminum tape is on order. That should seal the deal. 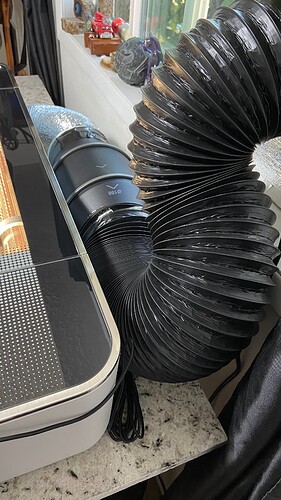 Yep, that’s how I originally had it, but I had the same result. It would be great if I could straighten it all out a bit more, but I can’t really move the Glowforge without it blocking a door – so still thinking this through. Thanks!

Hmmm, I’m not sure how I’d get hard pipes to work where I have it, but I can see how that might work better. I’ll have to think about it – maybe I can find a way to turn the table that doesn’t block my door.

Yep, those were the things I checked first thing. It’s all fairly clean. I’ve only had this fan for about a month, but I don’t cut/engrave every day, so it’s still pretty clean. I haven’t felt any air blowing from any of the attachments, and I don’t really smell the smoke in the house, I just see it in the Glowforge, and I think it’s interrupting the beam when it gets heavy enough. I’ll just keep trying to re-position things and see if a straighter/shorter path to the window helps. Thanks for the info!

Wow! My fan has never been that grimy (yet). But I have cleaned it twice in the last month just to be sure. But thanks for the info on the power of the fan – that was on my mind - was wondering if it just wasn’t powerful enough to pull the smoke out as well as the machine fan.

Even though I won’t be able to leave it there, I’ll see what happens when I get the whole fan unit on a more direct and shorter path to the window and see if it matters (can’t leave it there because it will block a door and desk). Thank you!

I originally had my Glowforge right under the window like you, but rearranging the room so it could be 90 degrees to the window made the ventilation path shorter and straighter. It was worth moving. 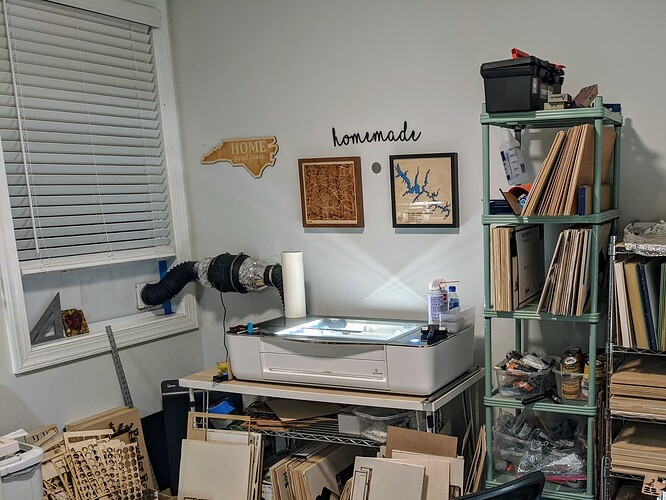 when i first got my GF i smelled smoke all the time, even with it vented properly, i used to smell the BBQ smell on my fingers as well.

a few weeks later, the smell disappeared. I think its a human issue more then an exhaust issue

Likely any leaks in the exhaust run were filled by accumulation and blocked the smoke.

By design the exhaust fan moves more CFM than the intake fan, leaving a negative pressure in the machine. All the cracks in the machine case will be drawing air in. Optimally, there is zero smell in operation.
I finally achieved that with my extended exhaust run, so I know it’s possible, and how it is intended to perform.

I was able to find all of my leaks by lighting an incense and following along the vent tubing, clamps and hoses. I found a spot where the venting foil had already torn. The Cyclone itself has a draft where the casing comes together. At first I was concerned about the gaps on the top of the lid but the incense smoke debunked that theory. Best way to find the source of leaks.