Hi all, this is the first try at acrylic awards. i used 1/8 clear Acrylic. 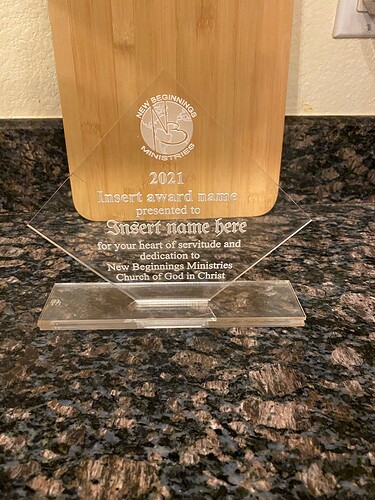 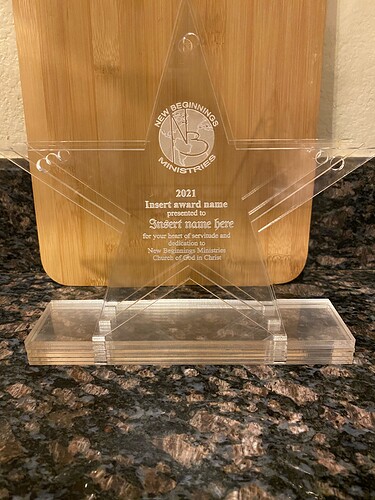 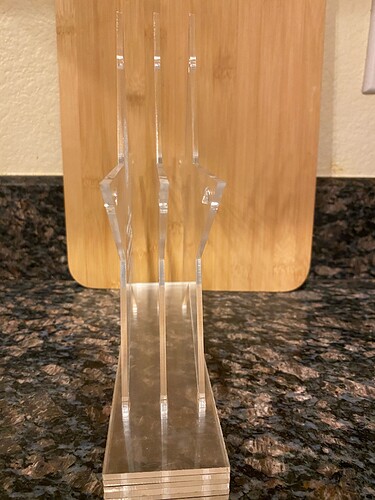 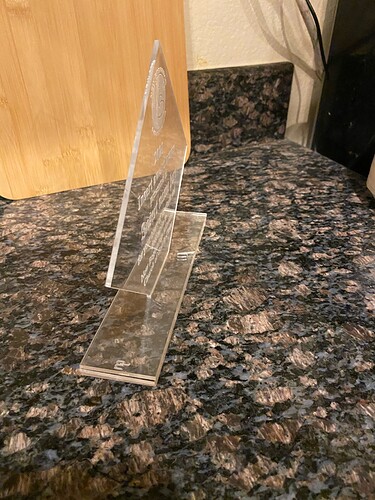 What a beautiful engrave you’re getting!

If it were me I’d round the corners to be less stabby and use a thicker acrylic to look more luxe.

Those are very nice! I second @ekla’s suggestion to use thicker acrylic…

First - lovely award! I like the layering.
You could just use the PG settings - acrylic is pretty standardized across the industry.

2nd - we’re only allowed to discuss non-PG settings in the Beyond the Manual section. You should either delete your settings or move the post to BtM (click the pencil icon to edit)

(off topic and not directed at @deirdrebeth)

What’s the rationale for the non-PG settings only in the one forum? It either takes the post out of context or takes context out of the post. I’ve never owned any product or used any service that has had more “warnings” about what could go wrong (with as little information about how to protect against it).

We get it, different materials, suppliers, machines are going to behave differently and we’re using a laser that burns things. Be careful, double check numbers, always run an attended test with new materials and settings, etc… Yes, it’s a litigious world out there so companies and people need to protect themselves. And yes, user-based online forums can be the source of bad information (2020 provided ample case studies here) that can have unbelievable outcomes.

All that said, it’s overkill. And if the lawyers think that having the settings in a posting “over there” vs. “over here” is going to stand up in a lawsuit… come on. For every argument that says “we did everything we could to warn people”, there’s the opposite argument that by littering everything with slightly different warnings and messages it achieves the opposite effect - people ignore them.

It’s fatiguing. Especially when PG material has been out of stock since I bought the machine. How about we all just have users watch a video, sign a waiver once, and then get on with using our machines without the added friction and help each other out in the community without friction?

The vast majority of users have to be mostly using non-PG material given the availability in the shop and the projects we’re seeing photos of.

@dan - embrace what your community is doing with the product rather than push the PG business and prophylactic legal warnings at every turn. I’m guessing this is less the result of a master plan and over-reaching legal team, but more an evolutionary process as the software and community evolved which has just gotten cluttered without a fresh look.

There’s nothing wrong with the PG concept or business model - there are some users that truly will appreciate it - but this harkens back to “Clippy” in Office 95 and the default browser battles with modal dialogs trying to get users to change.

Most users knew how to operate the apps and were just making documents and spreadsheets - they didn’t need or want cute interruptions helping them set document margins.

It would take an afternoon to have a designer or PM to go through the UX, identify all of the speedbumps, warnings and notices and propose a streamlining for you and legal to review. I think people would really appreciate the effort. @dan, as you said in your 2020 recap - what was it, 13M prints? That’s a great milestone, but it’s also 50M UX speedbumps that could be removed safely.

The lawyers said either keep it all in one category, or remove it entirely (per @dan - WAY back when)