Advice for cutting through .44” rosewood with a GF Basic

Hi all. I tried cutting through this wood on a scrap piece and it charred quite a lot and after 7 slow passes at 300 speed and full power still didn’t cut through.

Edit: Though I don’t think 7 passes would be needed.

It really depends on the species of rosewood, I believe.

The softest of the species is going to be about the same hardness as red oak. Glowforge sells red oak but only in 1/8 thickness.

If it’s another species of rosewood, it’s going to be a very, very hard hardwood - right up there with purpleheart.

0.44” is a pretty thick piece. With the laser “depth of field” at about .1” (if I remember my calcs correctly and ignoring internal reflections in the wood) you’re going to have a lot of the beam out of focus. You’ll need to do multiple passes with adjusting the focal point downwards as you go

Edit: Though I don’t think 7 passes would be needed.

Once charred it makes it a lot more difficult to get through as it doesnt ablate as easily, and doing so can cause the material under it to char, leaving you cutting through endless layers of it to make it to the bottom. Same thing happens with silicone

That would be quite the challenge if it is a harder species of rosewood. I’ve had some mahogany that behaved like this. Very dense, even a challenge at 1/4".

Would I gain an advantage of better focus by removing the crumbtray and lowering the piece?

Make a jig and cut both sides?

I don’t know how hard it is. But it’s meant for a guitar fretboard. It’s sold as a fretboard blank.

.44 should be fine with the crumb tray, I would think. There are probably plenty of people here that know a lot more on cutting various woods than me. I know from experience, though, that reducing char typically means some combination of higher speed/lower power. I’ve burned off individual layers of wood fiber with no visible darkening. Cutting through can be done without significant char.

Once charred it makes it a lot more difficult to get through as it doesnt ablate as easily, and doing so can cause the material under it to char, leaving you cutting through endless layers of it to make it to the bottom.

Anyone got recommended settings for speed/pwr for maximum ablation minimum charring? Assuming a hardwood…

I don’t have any rosewood to try but I do Baltic Birch ply at that thicknes. Full power, slow WAY down. I’m doing two passes at 110 zooms and focus just below the top.

Every wood is different. For example, Spanish cedar chars quickly at a low temperature, whereas poplar cuts like butter with minimal to no char.

I don’t know any settings off the top of my head, but I would jut run a series of singles lines across the end of the piece to see how they do. I’d start with full speed/full power, check the depth on that, then change it up as needed.

Definitely let us know how it goes!

Keep in mind that rosewood is potentially toxic.

There is a reason why Rosewood is used as a fretboard material. It is very hard and wears well. I have cut through 0.433" red oak with a Pro tube and some difficulty. The result had significant charing and a noticeable “lean” to the edge. Rosewood meant for fretboards is much, much harder. I wouldn’t think the same thickness of rosewood possible and end up with something useable. Especially not a basic.

Also 0.44" is about twice as thick as that used on most fretboards. Thinking the blank was meant to be planed to thickness first. I haven’t yet checked the kerf to see if using the laser for fret slots would work well.

On this 0.44" rosewood, used the 0.023" wide rectangle from the below file, with the below engrave settings… It might have gone a little too deep, but the result was nice. 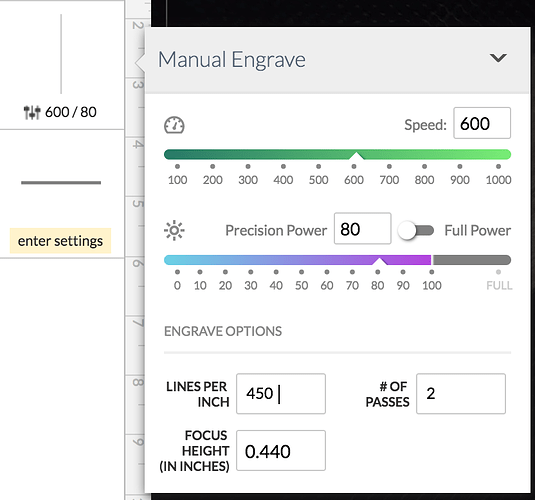 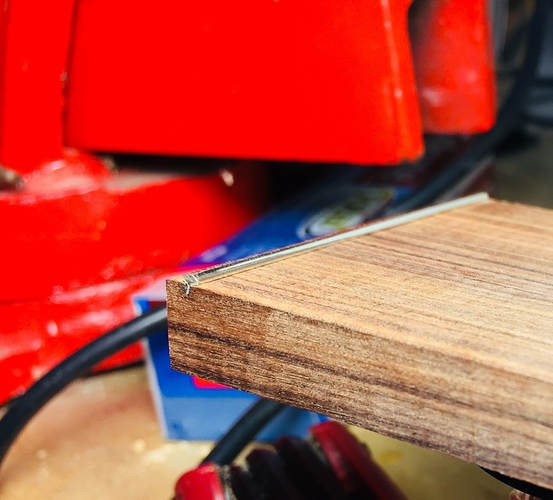 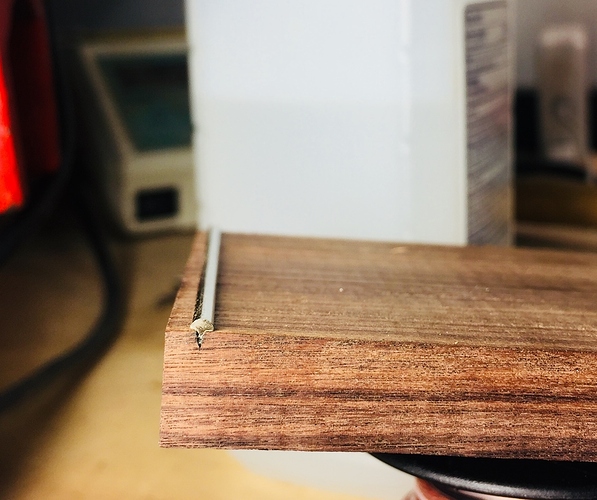 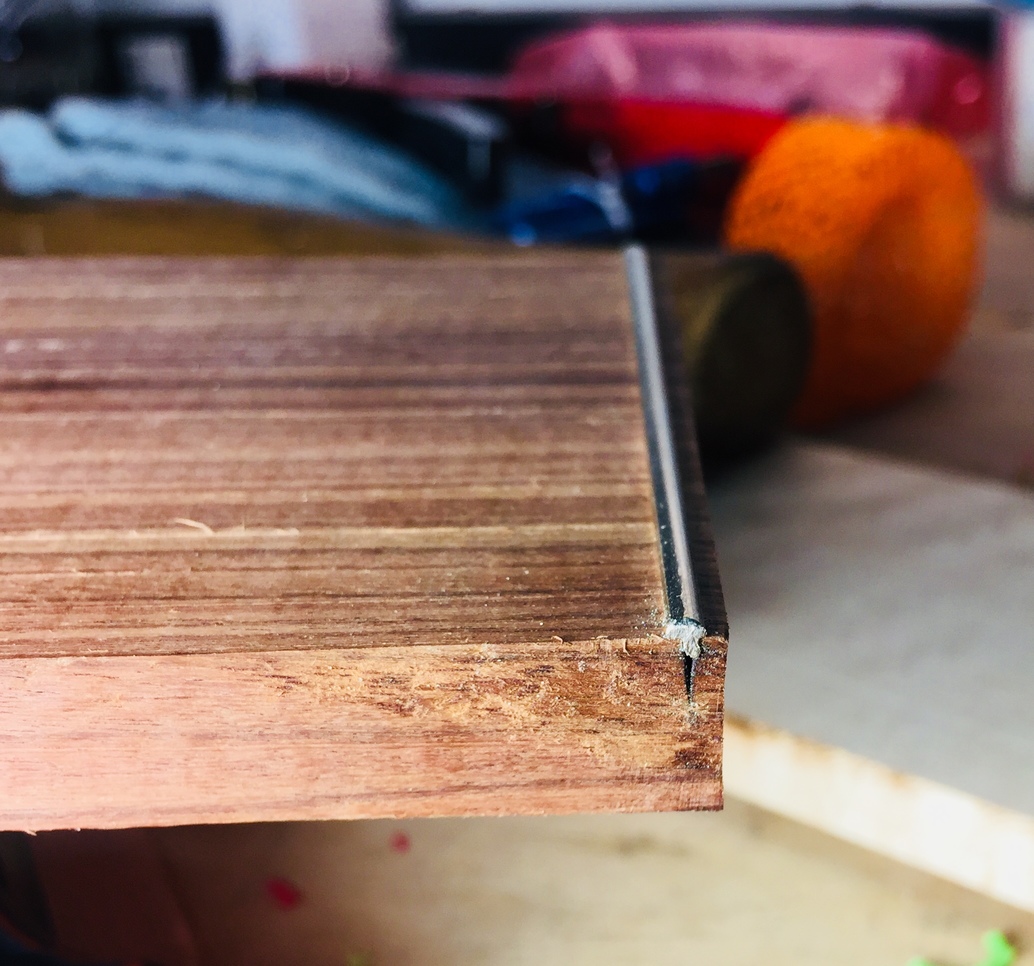 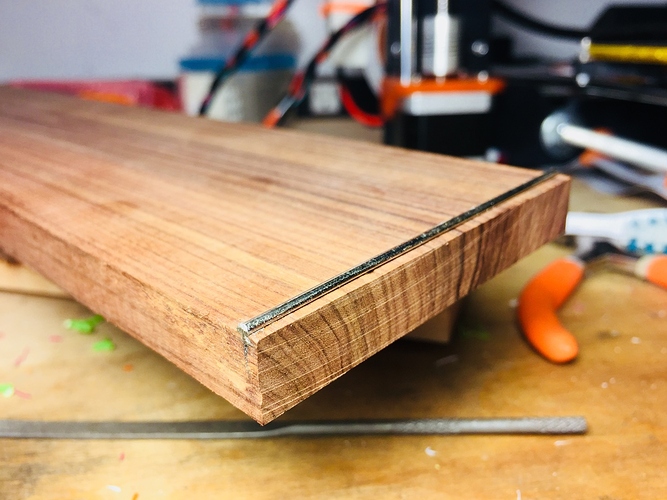 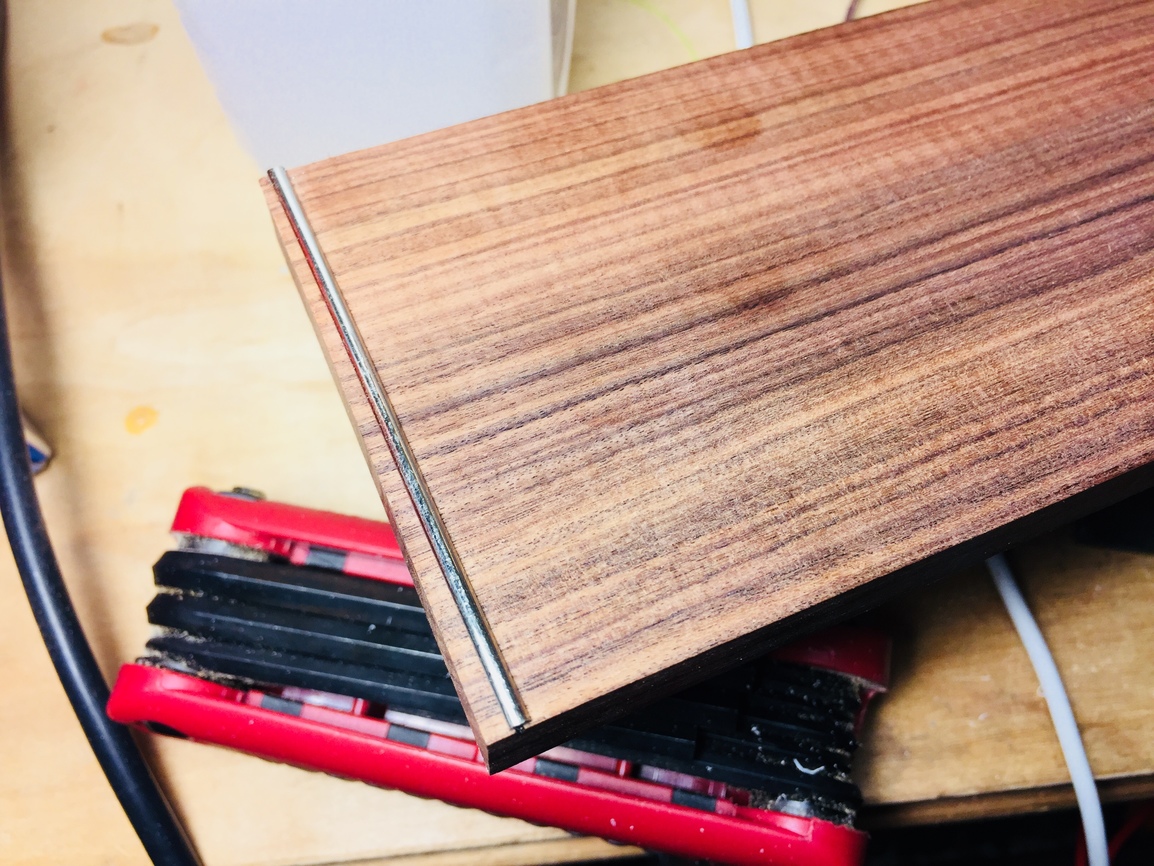 No Kerf compensation, and it seems to fit tight (had to hammer the fret wire in).

Also 0.44" is about twice as thick as that used on most fretboards.

Yeah, unfortunate. I dont have a planer, and I dont want to spend the time designing the 3D curve (which all fretboards normally have) or clamping it into my CNC machine for those planing ops… This is meant for a jewelery box with guitar fretboard top, so it can be a little thick - no problem

Or you could build a banjo or dulcimer. Flat fretboards.

Keep in mind that rosewood is potentially toxic. 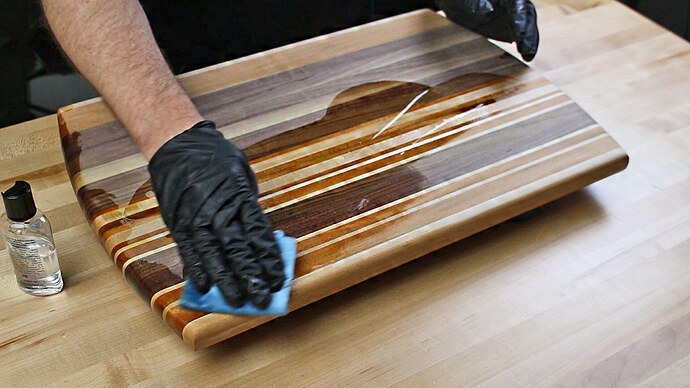 Wood Toxicity and How to Protect Yourself – Woodworkers Source Blog

Or you could build a banjo or dulcimer. Flat fretboards.

Nah, I’m building a jewelery box… No need for a banjo or a dulcimer. ha!

BTW: Inkscape has a fretboard extension. Does the calculations and layout for you.