Hi all I am hoping that somebody might be able to help. I have done a lot of looking around at posts on Affinity boards and here and nothing is seeming to work.

Here is what I am experiencing. I created some shapes in my AD file and then I converted them to curves to add the tails as seen in the attachment.

The hearts engrave with fill as expected but the other box engraves everything even though it should just be the outline. The curve has no fill. Am I doing something incorrectly?

I have tried an export of SVG without and with Flatten Transforms and I get the same output. 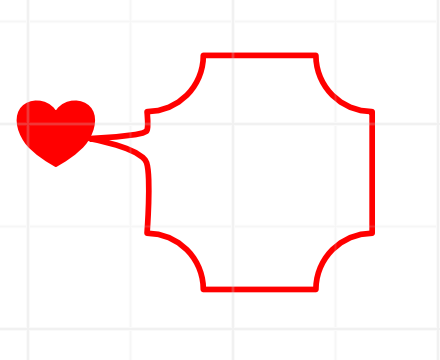 This random stuff like this is driving me a bit crazy.

Sadly without seeing either the actual output, or the actual art we’re guessing, but - in general if it’s set with a fill (even a clear fill) it’ll default to an engrave - BUT if it’s a vector you can click on the command box on the left of the GFUI and just change it to score to get solely the outline. It’s possible what you’ve got is two lines with a fill in between which when scored will get you two thin outlines, which doesn’t sound like what you want either. Last thing I can think of off the top of my head is that you’ve got a solid red box with a white box over it - but you need to delete the white box from the red box to truly get what it looks like in this image.

If you post your art you’ll get a 100% answer quickly. Otherwise I’m going to suggest you take a look at your outline view, since that’s what’s actually being sent to the laser.

Did you expand the stroke? That actually creates a filled shape out of the outline, which would make the GF treat it as an engrave.

Well I was going to post my afdesign file but it won’t let me. I posted the SVG but I am not sure that will help here.

Removed SVG because it is for a gift

Ok if I am reading this correct by doing Expand Stroke GF is basically ignoring the interior because it thinks it is a shape with an outer and an inner stroke?

The hearts engrave with fill as expected but the other box engraves everything even though it should just be the outline. The curve has no fill. Am I doing something incorrectly?

Okay, I misunderstood. It defaults to “cut,” because it IS a vector shape. And it’s engraving completely because, again, it’s a vector shape, so it’s going to engrave the fill rather than the outline.

I would just convert it to a score, unless you really want the thick lines. If you want thick lines (GF ignores stroke width) you DO want to use “expand stroke” in Affinity. Be warned, though, that engraving them all will take a LOT longer than scoring.

Alternatively you could “expand stroke” and then score the resulting double lines. That might be a good option rather than engraving thicker lines.

I am not super concerned with the width in this case. I will go with a score. Thanks @geek2nurse