And UPS drops the ball(hopefully not the Glowforge as well)

I got the coveted golden email, and I was disappointed it’s not gold at all. It was pretty much entirely black and white. They really should make that email fancy all things considered. Then I got my shipping notification on December 29th. At which point it vanished from the UPS updates for over a week. It was finally scanned in for pre-delivery last Thursday in the middle of NorEaster on schedule but the delivery that was supposed to happen Friday was delayed.

Then it was scheduled for Saturday delivery… which I stayed home specifically for, tracking said out for delivery… until it was listed as exceptioned(bets on UPS guy trying to lift it and saying screw it anyone?) and now it’s in limbo in the UPS system, despite an email from UPS claiming it was delivered(neat trick since it requires a signature). So I’m amused but also annoyed at this point.

What IS the procedure if UPS manages to lose a 4000$+ piece of equipment? Ignoring the likelihood it’s damaged, which I’m pretty much assuming will be the case at this point, since even with gentle handling, it was almost certainly subjected to sub zero temperature during its travels.

Of course it will probably get another attempted delivery today regardless. In which case, if the UPS guy doesn’t bail again, I’ll have pictures.

My forge came in on a Budget truck with a UPS magnet on it. They can’t fit it on the truck with all the other packages supposedly, so it might be delivered by another guy.

Have you tried going into UPS My Choice and modifying the delivery instructions - maybe pick it up from their depot? The box is pretty huge, and you’ll need help lifting it.

If UPS is showing it as delivered, it might be delivered, but to the wrong address. Or maybe the exception was when they damaged it, and delivered means it’s returned to FLEX. Email support@glowforge.com and email UPS about it showing as delivered when it’s not at your address.

Oh I’m fully aware of this. I’m not at the point of needing solutions yet. Really, just consider the post amused but also annoyed venting.

I certainly considered picking it up myself, but usually they only allow that after a delivery attempt fails because someone isn’t home. Since they apparently didn’t actually attempt the delivery, they may not let me try that. Not to mention, by this point as far as I can tell, it is MIA, so no location to pick it up at.

As for it being delivered elsewhere, I had considered that and UPS assured me today that it’s still in their possession and the delivery notice was cancelled out.

Also further update they finally called me back and there will be “another” delivery(there was a first one?) “attempt” today by 7pm.

It wasn’t the laser, but I’ve had a notice that this item was delivered, but not here. I got on the phone and finally got a lady who assured me it was still on the truck. It was, and was delivered the next day.
So unless it’s sitting on my porch, I don’t rely on that ‘Delivered’ message as factual.

What IS the procedure if UPS manages to lose a 4000$+ piece of equipment?

In general UPS makes right with the person who shipped the thing according to the terms of their contract. As regards glowforge, you contact support and so for they have been very responsive in shipping a replacement.

mine was in limbo for a day at one point as well. i had set it up to pick up myself at the depot. UPS said it was at the delivery depot, along with the crumb tray box. i got the notice that the crumb tray box was ready for pickup, but not for the GF box. i went in anyway. the guy there said that the GF box wasn’t actually at the depot and it had last been scanned 2 days ago at the prior stop (which was all of 25 miles away). it eventually showed up the next morning.

customer service guy told me UPS does “predictive” tracking sometimes. which means they don’t always scan every box at every stop. so they didn’t scan the GF box, but “predicted” that it would have been there already.

Yes it’s funny that it “predicted” it long after it already had a delivery fault in tracking.

Anyway I’m not particularly concerned with it getting delivered. In all honesty, beyond my annoyance of not having it finally, I’m more just amused by the thought of them delivering a 4000$ item to the wrong person.

I’m more concerned what the effects of prolonged exposure to 0F / -18C on the glowforge would be.

but usually they only allow that after a delivery attempt fails because someone isn’t home.

With UPS My Choice you can do the intercept before the first delivery attempt. I was out of town when mine shipped and I redirected it to be held at the depot.

My driver is great and will leave items when I’m not home. Granted these are small boxes from Amazon but I didn’t want to take the chance with the forge.

USPS on the other hand delivers my packages to some other location and lets me know they were delivered and “left on front porch.” My cameras say otherwise but they insist they delivered it to me.

With UPS My Choice you can do the intercept before the first delivery attempt. I was out of town when mine shipped and I redirected it to be held at the depot.

Correct. I did that so I could pick it up vs letting it go on the truck for the last mile based on the rash of issues people had in December. I still ended up taking if off a truck in the parking lot of the depot (and it was upside down in the truck).

It was stupid cold (below zero) here so a few days of that doesn’t seem to hurt them.

Well, my amusement at this is beginning to dwindle as they have apparently managed to “misplace” the package, and all announcements of pending delivery were apparently false as it appears they may never have actually known where it was… even for the Saturday delivery.

I’d like to say hindsight is 20/20, but it sounds like even if I said I would pick it up before the first “delivery attempt”, they very well may not have been able to find it. I’ll hear more in the morning when they call me back. But depending on the results of that call… it’s looking very much like I will have to contact Glowforge support, as well as have UPS launch an investigation as to what happened.

Let us know how things pan out! Good luck mate.

They finally delivered yesterday. Two handles missing and delivered on its side. Spent the evening setting it up, and did the standard ruler and keychain test prints. So it seems intact despite everything, other than a flaw/crack in the glass lid. 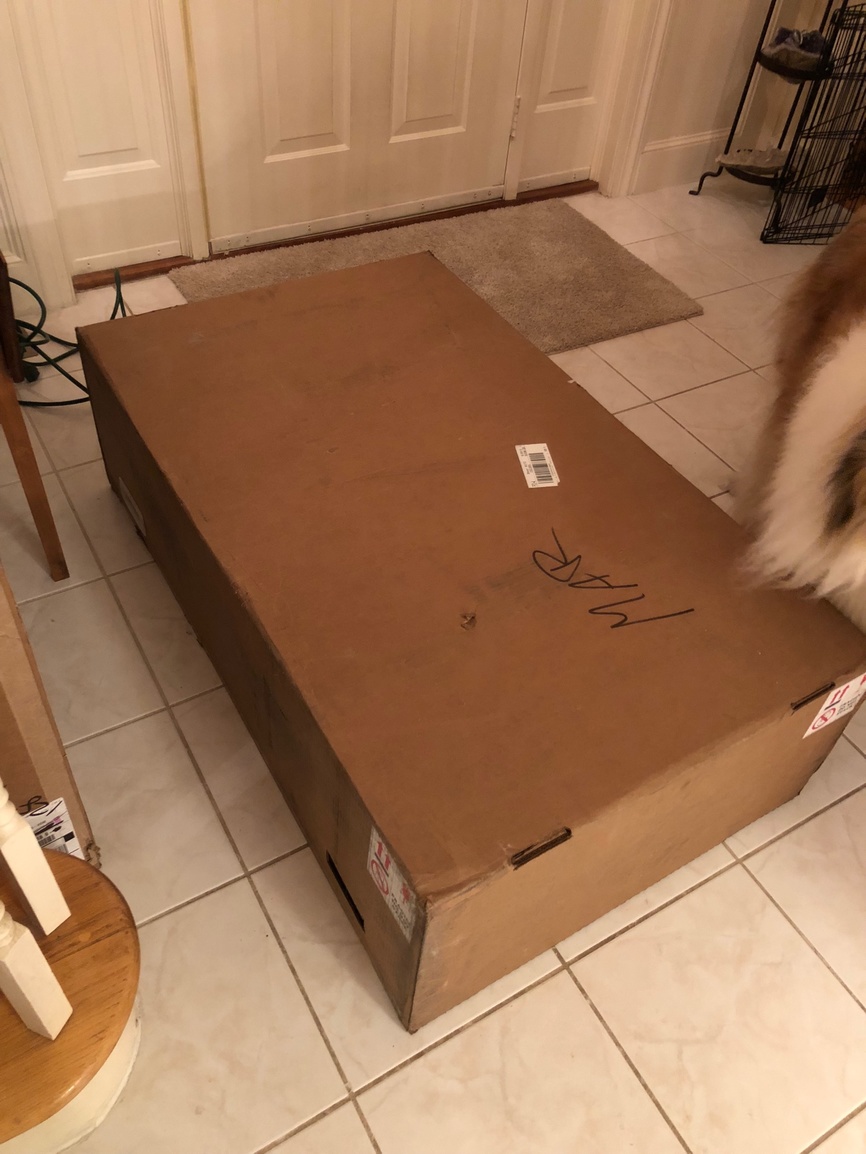 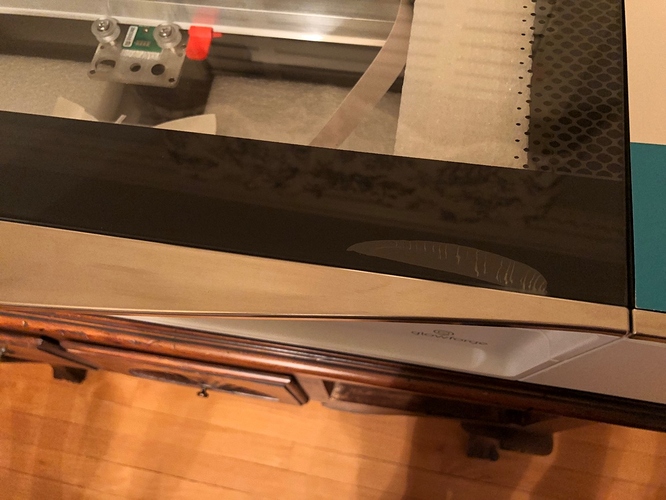 As you can sort of see, my dog was curious about it as well. But it is set up and functioning, so now I just have to learn and figure out what I can do with it.

That looks like the adhesive issue others were having with the lid.

it does look that way, but at least it isn’t on the hinge side. Personally, I would report it to support, take measurements, and mark the edges of the glue-fail area with tape or a china marker, so that I could monitor if the area was expanding over time.

Yep could be. I’ve let them know, doesn’t affect how it runs ar least.