I saw this in my latest Arduino email… 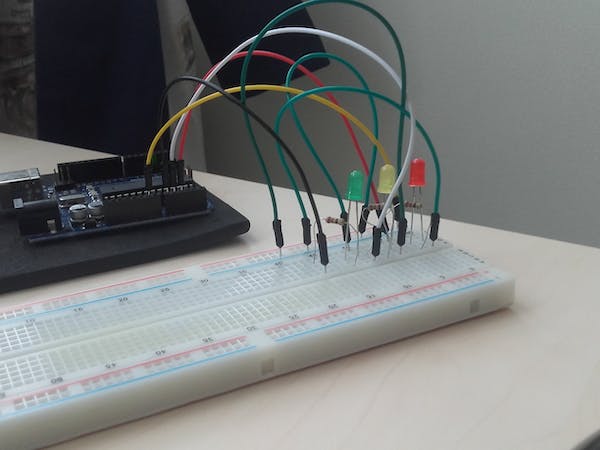 Three LEDs: green, yellow and red that create a traffic light. By Tech with Matthew.

As a traffic engineer I thought “ooh!” and eagerly clicked the link. Then I saw that it just cycles through the three LED lights and thought. “This is stupid”. But then I read this sentence: “Hello! My name is Matei. I’m eleven years old and this is my second project.” and I thought “Well, I guess I’m just a jerk.”

This is awesome that an 11 year old is starting into this world, and even more so that he wants to share his progress, and finally, really cool that Arduino would include his project in their email. Way to go Matei! Keep up the great work!

Cool, I’ve been sitting on an arduino kit I bought a year ago and haven’t made time to start playing with yet. Maybe it’s time.

I crash course my junior/senior level college students in programming with an Arduino and stoplights.

The system is fantastic, because you can start dirt simple (3 light cycle) and progress to complicated (proximity sensor, crosswalk signals with flashing warning and button triggers, timers, multiple intersection coordination…). But the whole way through that progression, everything is intuitive and familiar, allowing students to test variables in borrowed code by slipping in extreme values and immediately noticing the changes caused.

A few years ago I programmed an Arduino to receive a command from an in ground coil sensor and control a vintage railroad crossing signal. So now when someone comes up my 1600 ft driveway I hear a doorbell chime in the house and the railroad crossing signal flashes the standard train warning. Each new UPS driver stops just before getting to the house, unsure as how to proceed. If the Arduino ever fails I may have to hire the kid to reprogram it. 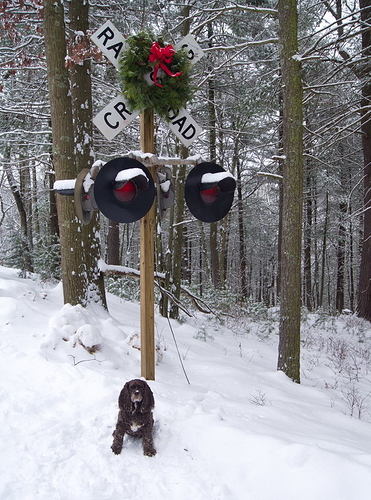 That is truly spectacular. I’ve been on the hunt for a full-size traffic signal vehicle head for a while. Don’t know what I’d do with it yet… but I want one!

Bet they love that! ROFL!

You’d think the first clue to ignore the railroad sign would be the fact I’m on top of the mountain. Thought about installing steel track across the driveway but that stuff is EXPENSIVE. It’s cool with the warning chime that I have enough time to put on my shoes and walk outside before the delivery truck ever gets to the house.

My brother in law rigged up an old traffic light using an Arduino to help his wife to park in the garage. When the garage door open it turns on and goes green then it turns yellow when she is 5 ft out and red when she is in the right spot.

I’m not she she like it as much as he does.

My father just hung a tennis ball from the ceiling on a string.
When the ball hits the windshield you were in the right spot.
I used to spend 10 minutes hitting the ball with the wipers before getting out of the car!

You can get at least some used LED individual traffic lamps from various surplus sites. Useful for enticing people down your driveway on halloween.

I’ve been watching the cities around here to see if one pops up on their sites.

Getting a whole light is generally pretty expensive, because those things are huge honking solidly built pieces of metal. But the LED roundels and a hacked-up case should do in many situations.

but its a red light

I used to spend 10 minutes hitting the ball with the wipers before getting out of the car!

I’d always get in trouble for doing that, since the ball would fly off the string!

Some of the 8-year-old’s friends think that the ball is some kind of garage toy where the object of the game is to get the ball tangled in the opener mechanism. A little disconcerting the next time I drive into the garage and there’s nothing there telling me when to stop. (Of course if I made something with a proximity sensor and a light, there’s no telling what kind of games the could play with that.)

Got my tennis ball connected to the garage door, when the door opens the ball lowers to windshield level. Close the door and the ball raises up near the ceiling out of the way.

Smart, but how do you play wiper tennis?

That pastime never occurred to me

@Scott.Burns, I can’t take credit for the idea, but when I saw it I wondered why that never occurred to me.

That is so cool. I wish I had thought of that. Excellent idea.