An “Armory Stand” (that’s what my son calls it) that he wanted to make for his sister for Christmas. A much better way to hold her bow than to just have it standing in the corner. We hope she enjoys it.

Designed by me, made from solid oak. 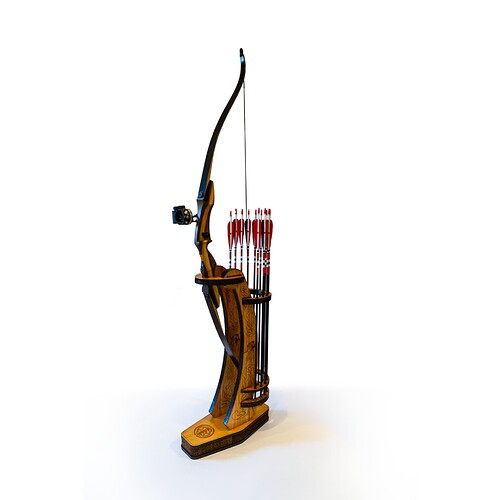 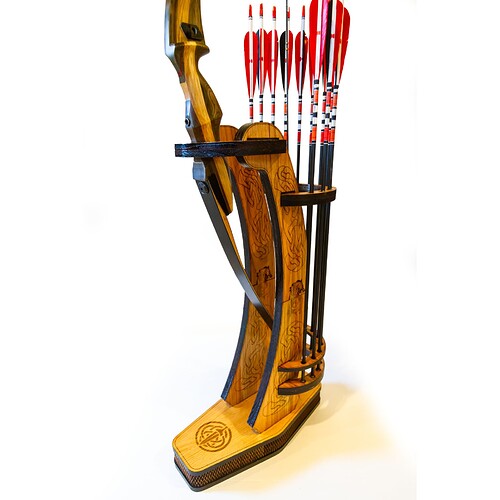 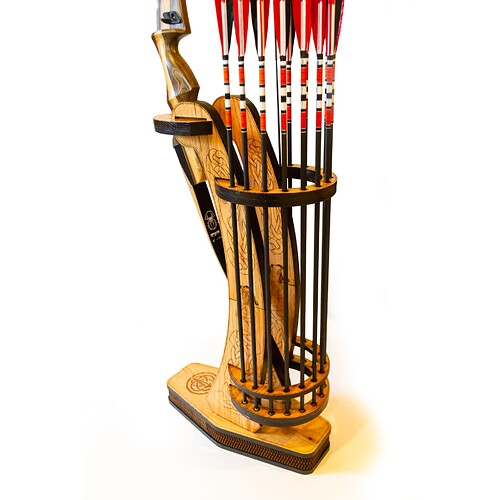 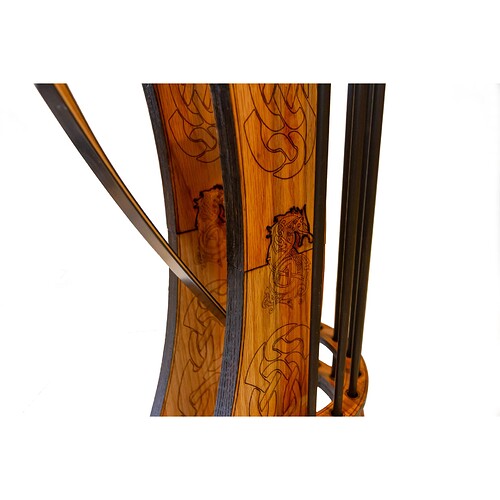 PS… please don’t derail the thread to debate about whether it’s best to store a bow unstrung or if it doesn’t matter. I’ve read a ton of positions/anecdotes that argue both ways. grinning:

That looks fantastic, regardless!

I don’t know anything about storing a bow, but I know for a fact that this is a beautiful solution. Your daughter will love the time and care you took in designing and making this for her.

A: have you read this forum? Lol we derail everything.
B: it won’t get derailed for that reason, it’ll be something like cookie recipes.
C: nice project.

Oh my goodness! She will LOVE this. It’s beautiful and practical, and it looks as if it comes from another age. Love it!

That’s a creative joint there with the dragon (wolf?) head. I especially like the “Quiver”.

Yea, I just figured if there’s any archers in these woods, that the “You shouldn’t store a bow like that” might come flying my way, and just wanted to deflect them ahead of time.

Thanks. I was looking for a unique puzzle piece kind of way to join two pieces together light that since the glowforge isn’t big enough to cut the entire length as one piece. I used shellac on the wood so that I could wipe off the burn marks with some alcohol after cutting, and in hindsight I would probably put some masking tape on the wood instead if I were to do it again at that joint since the burn mark was pretty severe there.

Nailed it. And regardless of how it is stored, the picture requires it to be strung!

I assume the theory is that you stress the bow too much by having it strung? Some sort of fatigue thing?

That is absolutely gorgeous! I know quite a few archers who are currently jealous and don’t know why

That is one of the most beautiful makes I’ve seen! I’m sure she’ll love it

Beautiful. My archer daughter would love that.

Many great ideas! How thick was the wood? I can see it is two layers, by defocusing the laser all the score marks would be darker and thicker and more similar to the dragonhead. It is hard to cut thicker woods with the light scorching you can get from thinner stuff

This looks so awesome.

This is truly amazing!

Ideally I would have just made it out of 3/4" oak, but since you can’t cut that thick, I sandwiched two 1/2" thick pieces of oak together. My experience has shown that cutting thru even 1/2" thick oak is no walk in the park. I’ve tried everything all the way up to doing 9 passes! Even have done multiple passes with varying focal depths at each pass, and there doesn’t seem to be a magic bullet for cutting thru 1/2" thick oak. I did everything with one pass, but found that 1/2 the time it wouldn’t cut all the way thru, or at least no around the entire perimeter of what I was cutting. So I put down a piece of cardboard and cut out a rectangle that is the size of the piece of oak I would be cutting. Then I would put a cross hair cut as close as I could to directly below the camera (without it being on the part I was wanting to keep) and if it didn’t cut all the way thru, I would flip the board over (with the cardboard keeping the oak piece in the same position on the tray) and then, I would mirror the design and if necessary, I would nudge it to line up that cross hair I had cut. This would line the design up on the back as best as I could then I would do another cut pass from the back. While not perfect it worked well enough to cut thru the oak. The main problem I had was that I wasn’t thinking that 1/2" oak isn’t exactly 1/2" thick (after drying it’s a hair less). If I were to make it again, I would either use 3/4" oak and cut and plane it down myself to 1/2" thick, or I would plane all the 1/2" oak so that every piece was exactly the same thickness, and measure that thickness and adjust my design accordingly.

As far as cutting a second pass from the back side, I wonder if on a future update to the glowforge if they could also have a lidar scanner next to the camera that would 3D scan the workpiece and then if you flip it over it could 3D scan it again and orient your design to precisely line up with the front side?

Well it is the season for cookies. I get the leftovers from my wife’s baking for friends & neighbors. Finished off the coffee cake shortbread ones today and she made some gingerbread I’ll eat the rest of the week. Earlier I finished the orange molasses with crystalline sugar topping