This is a new one for me. 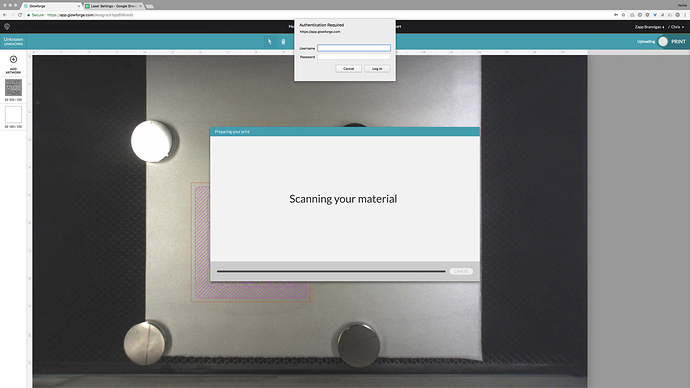 FWIW, I hit cancel and it reloaded, and it seems to be working after starting over. Everything feels a bit slow and glitchy tonight.

I have never seen that in the GFUI but I have seen it at work when things are wonky.

Not new for me. Only happened while using Chrome. I quit using Chrome, so can’t say if it was ever really solved/resolved. It may have been related to also being logged into firefox as well, but never really confirmed. It wasn’t a big deal unless you wanted to do multiple operations on the same file becasue you lose your setting etc. It ruined a few projects for me :-/

Does anyone know how to keep the GF login window from popping up in Chrome? Hopefully it’s just something minor I forgot to do like check a box or something… (Or better yet, can we get Firefox stable again

) So I had quit using Firefox becasue it still keeps randomly doing this. I opened Firefox again today becasue Chrome was giving me issues. Firefox worked fine for a while and then material disappeared from view. When I moved the artwork over a few inches on the GUI, everything d…

I’ve seen this using Chrome one or two times, but only on one day a few weeks ago. Nothing since then.

This is what was happening to me the other night when I had 2 machines with the GFUI open.

Closing the GFUI window on the second machine made this error go away.

Me too, every time I’ve encountered this I found an instance running on another device.

Saw one of those the other night. It was a long time since I’d used that machine. (Firefox, fwiw). Reloaded and it went away…

Me too, every time I’ve encountered this I found an instance running on another device.

Thanks for letting us know @chris1. This happened more often than usual this weekend. As you may have seen, we saw our highest number of active users ever - more than 30% higher than ever. That revealed a shortcoming in our ability to scale up rapidly, and another shortcoming in our alerting that failed to notify us of the problem. We put a short-term fix in place now, and are working on a permanent fix for the long term.