My brother and sister-in-law share a house with me, and they’ve got a baby who won’t sit still long enough to be changed. They found he’ll sit still if one of his favorite videos is on, but then he wants to turn to see it. The solution, suggested by my sister in law, was to strap the video to your head. Cue some rapid prototyping. 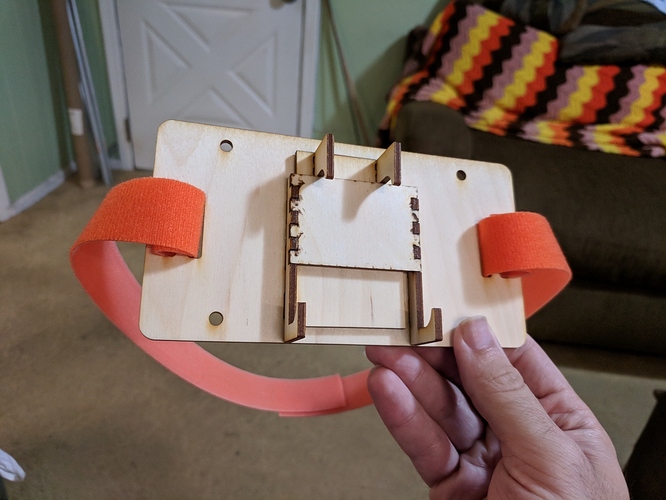 In theory you could use it to make your phone a head mounted camera or flashlight.

i don’t know why, but i feel like someone could turn this into some kind of crazy, high tech version of indian poker/blind man’s bluff.

Great job!. I think you should paint a bulls-eye on it so boys have a target to aim for

A byproduct of this design process is a home made tripod mount for the phone. Also featured in that photo is a pair of 3D printed “Funks” and my previously lasered “box o’ grandma candy.” 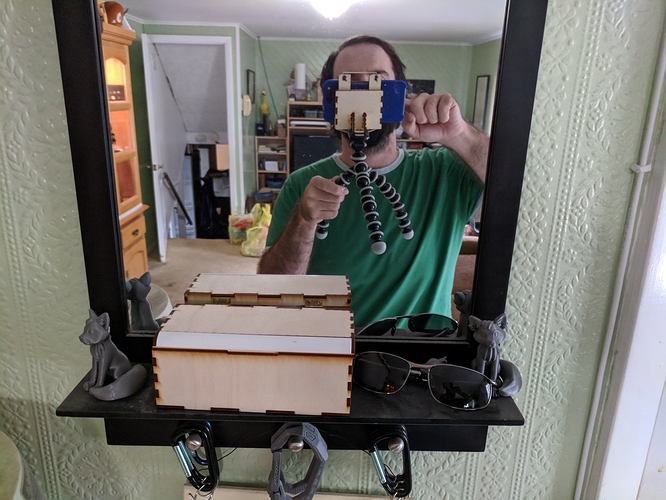 Gotta train dem kids to play on their phone while they poop as early as possible!

Ah the alligator roll phase. They’ll miss it when it is gone.

A low tech version, is to just toss a forearm across the kid’s pelvis. If the pelvis cannot lift, the kid cannot turn. Oh they’ll try, but they won’t succeed.

I sat on the floor with the kid in front of me to change them. That way I could use my (bare) feet to hold their shoulders/upper arms in place, leaving my hands free to do the diapering.

Ahh, to be as flexible as I was then!

I will admit to having done that as well.

I’m currently on diapered child number 14 in my nannying career. If there is one thing I’ve learned it is that necessity IS the mother of invention, and that parenting books are too sure of themselves for being the only right answer.

Amazing! You’ll have to update us on how well it works.

I have a video of the first test (back when it used just rubber bands instead of the clamp). But the first half of it includes a naked baby. It does work pretty well. Not perfect. He still fusses a little. But no crocodile death roll.

Yep. Gotta make sure to give them kids their cocaine fixes early in life. 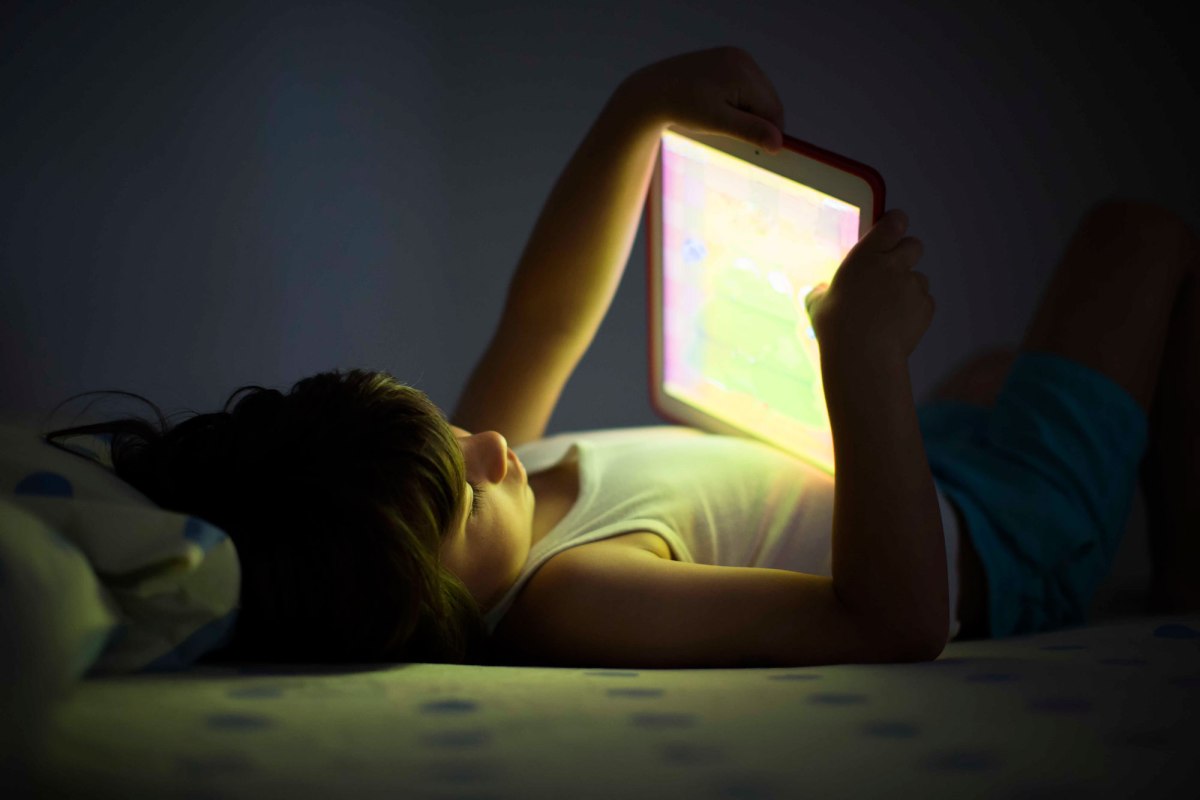 Susan* bought her 6-year-old son John an iPad when he was in first grade. “I thought, ‘Why not let him get a jump on things?’ ” she told me during a therapy session. John’s school had begun using t…

Oh, God, I hate articles like that; they are written by people who think anything new is evil, and have no real scientific foundation (except for vague references to hyped up misinterpretations of scientific studies). Which of course is obvious based on the completely incorrect (and inflammatory) use of the word “psychotic” in the headline.

I gave my granddaughter an iPad when she was 6 months old, and carefully curated the apps she had available to her. She could identify all the letters of the alphabet (upper and lower case) by the time she was a year and a half, and was sounding out simple words at two and a half. She’s eight years old now, has an iPad and a Macbook of her own, and has never had a psychotic episode or become a mindless staring zombie. She’s a well-balanced, intelligent, articulate kid who plays Minecraft and Slither.io (among many others), takes ballet, loves animals, enjoys drawing, painting, writing stories, and playing board games, and just earned her purple belt in karate.

Technology is not good or evil. It’s a tool. You can use it correctly or incorrectly. With proper supervision and intelligent limits (like, for instance, definitely not allowing use after bedtime, when nobody should be staring at brightly lit electronics anyway), It offers some really great educational opportunities. I’d much rather see a kid using an iPad than just sitting and watching television!

Oh, for sure total extreme cases and the real difference, being a parent and dictating to a child what they are allowed. And that article is absolutely written to make a gut emotional appeal, but there is evidence for what can, not guaranteed, happen. Same as a car. It’s a tool. But wrongly applied, can harm or kill. But we don’t ignore the possibility of the dangers of a car.

I would rather people avoid tech with young kids than use it as a baby sitter as this writer did.(And way too many people I see around me)