Probably easier to start fresh when the machines come out to the masses anyway.

Except there is a valuable deposit of “how to” and “where at” here that has compiled over 6 months. a lot of that is gold to some of us.

As long as our bookmarks don’t turn into a pumpkin, I guess it would be ok…

This is super awesome. What a cool discovery story! I want one of these computer fans too

Wow! The box is really nifty! Also, glad to learn about the dogbones, all those years of making architectural models and now I know about this technique…
There seem to be some burn marks, so I was wondering if you used proofgrade materials on this project or if you had to figure out the cut setting yourself.

I would have made the box, and used foam for the insert instead of wood.

Nice work!!! There are so many jealous people reading this that just cant wait to get their mitts on their laser printer!!!

For the few of you with beta units, I made a video with instructions on how to use Fusion 360 and Glowforge (we think since we haven’t been able to test it out yet). If anybody wants to try it out and give me feedback I might be able to throw a Fusion 360 t-shirt or some swag your way. I know its not much…but its something 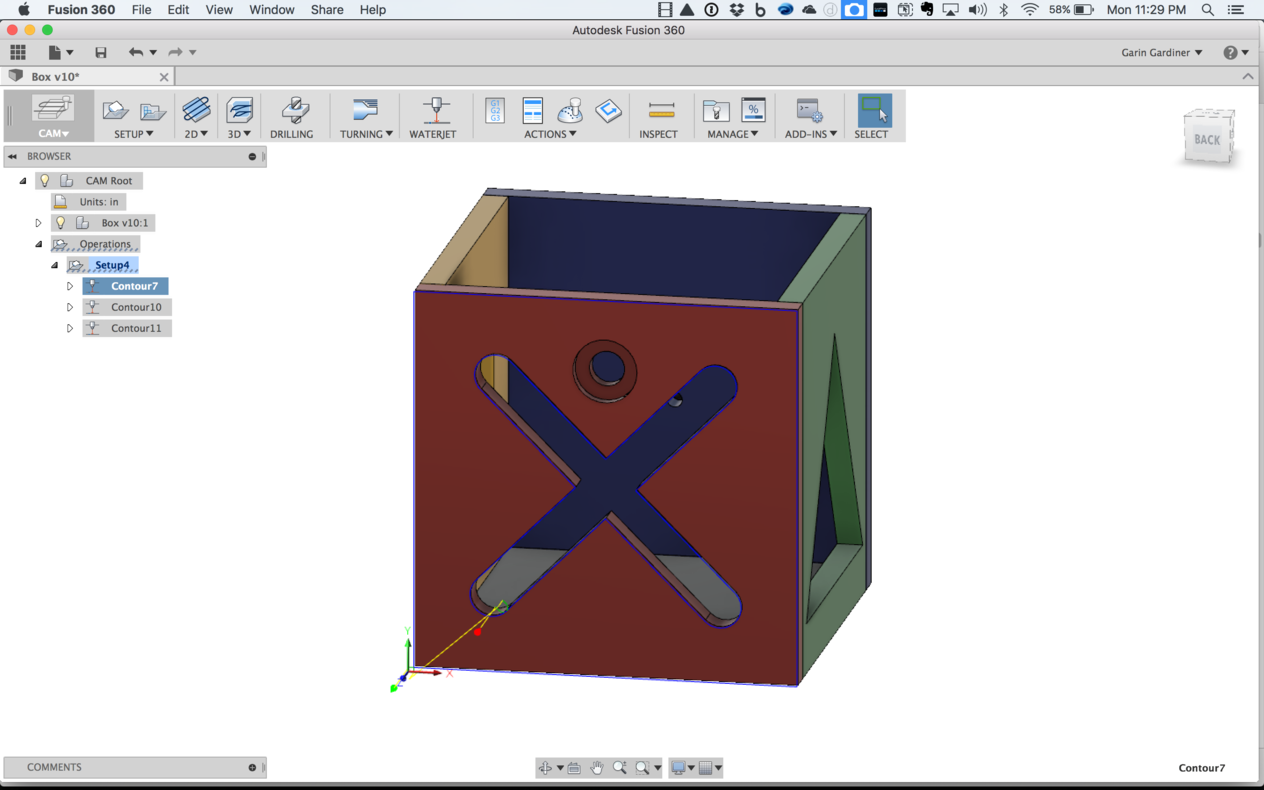 Wow! I will definitely try out your tutorial as Fusion360 is one of the programs I’m trying to learn. Thanks so much for doing this!

I am on my phone so tiny, watched the video this is cool but the motion plan the gf will re do anyway because its just a svg at the end. But… I cant tell from my small screen does the simulation have tool feed rate so that we can kind of anticipate project cut time?.. As we don’t have a gf atm so

Any time investment in learning fusion 360 will be a wise investment. Very hard to master simply because it does so much but you can be sketching out simple parts pretty quickly.

Yep, our posts work with Fusion 360, HSM Works for SolidWorks and Inventor HSM.

yes you can get machine time that is calculated based on the post and you can edit these settings. In this image you can see it will take 1:21 to cut the outer perimeter, cut out the X and etch Glowforge into the model.

Right now its set at 40 in/min and may need to be adjusted to be a more accurate representation. I also realized the Kerf is not right and something we will likely need to edit. 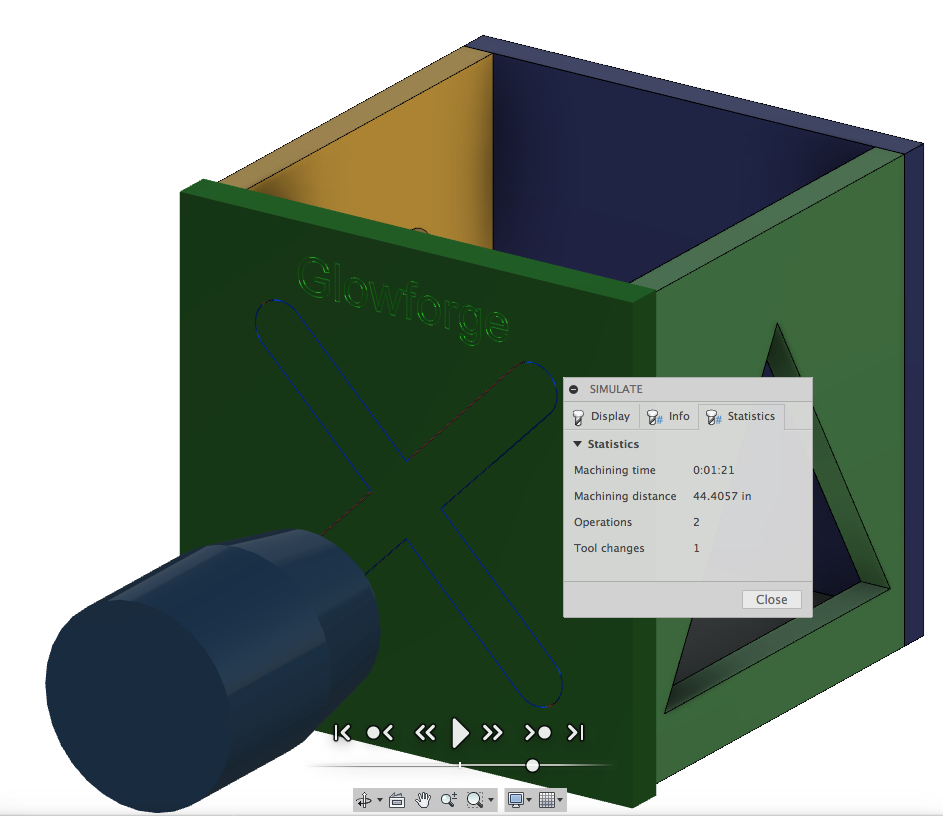 I really like all these features that are available, especially the simulation function. Have been thinking of downloading a copy as an enthusiast/hobbiest bet haven’t done so yet. It seems that Fusion 360 is very popular here for design. Since the only 3D modeling software I am familiar with is Sketchup, I’d like to move into something more robust. Just am not sure. This is helpful.

We did a webinar a few months back that may help you get started if you want to try out Fusion 360. I work for Autodesk on the Fusion 360 team and happy to answer any questions you may have to get started.

BTW - there is a Sketchup importer

I am not sure I am ready to learn yet another cad package at the moment, but I did watch the video. My main takeaway was that you are really going to want to work on that simplified option.

Being able to easily pick a face and just export an orthographic as an SVG would be a useful function!

I go back and forth as Sketchup is faster for a quick bookcase or such but if you want to do several bookcases of different sizes then Fusion is the way to go as the parametric capability is fantastic. Set up your model right and you can change your material thickness, depth, width, and height at will and let Fusion 360 do all the work redoing it.

wow so I am giving this a try and clicking all the tabs for my interlocking walls is a MASSIVE pain I keep miss clicking or clicking on the wrong plane. it would not let me click the primary body so I’m having to click 100’s of edges

Sweetness! Although the post would prolly technically work in SolidWorks/HSMWorks, I had to edit it very slightly to make it actually work with my version of HSMWorks (I didn’t feel like researching long enough to see if there was some way to enable waterjet support).

First I had to change line 19, which says…

For the toolpaths I just did a 2D Contour and created a tool with a diameter of 0.2mm. The “Left/Right” option worked, which is nice! That option wouldn’t work for me in Fusion 360.
(Oops, I think I should set the diameter to something much lower, something like 0.05mm.)
(Oops2, a Trace toolpath is better, as it also has a “Center” option. All three choices seem to work.)

By the way, my Fusion 360 post processing dialog looks different than the one shown in the video. I don’t have a “Source” option like in the video. In its place I have “Configuration Folder”, which seems to only want a path to a local folder. (I am also using Windows 10.)

I think this post processor is going to save me, like, 5 steps to cutting things with my current laser cutter!

It looks like the post sets the line thickness as well. Modifying that from the current setting (which seems to be 0.1mm) to 0.01mm will save me a little more time and allow me to use Illustrator even less. Bonus!

Hopefully making a filled shape for engraving will go as easily…

Looks like the interface has changed quite a bit in the past 5 months. Maybe an updated video. I was able to find and upload the Glowforge Post to the A360 cloud drive, but once I did that, I couldn’t find how to get to it through the Post Process procedure. I finally opened it locally, but then it failed on the post process and didn’t produce the SVG file.

However, this looks like and awesome process that will make exporting 3D models into GF ready SVGs much easier.

Let me take a look at it to see what’s changed and make a new video.