I wanted to make a
small box to help me organize my collection of belt buckles so I decided I’d
try one of the online box designers as a starting point and go from there. I went over to http://www.makercase.com/ and gave it the
rough inside dimensions I wanted and told it I was working with 1/8"
material and it was kind enough to produce an svg file for me with finger
joints. I took that into Illustrator and
started cleaning it up by removing the top and the associated finger joints so
I could have a smooth open top to mine.
I also made a center divider with positional finger joints of its own on
either end. At some point I realized I’d
given the incorrect dimensions, but wasn’t dissuaded and just started
stretching it out to the size I actually needed. It’s rather fun thinking in 3D via 2D planes
like this. Eventually I had a design I
thought would work and I printed it out to see how I did. Luckily enough it all worked out as expected. Instead I opted to glue it
together. I have some stuff from Tap
Plastics that welds acrylic and it works pretty well, but really hard to
control. It’s at least as thin as water
and evaporates really fast like rubbing alcohol. I have a squeeze bottle with a needle tip to
apply it precisely, but really, as soon as you turn it over it starts geysering
out of the tip and sprays everywhere. It
tends to make the acrylic cloudy wherever it hits and pools at all, but does
get pulled into the crevices and ends up melting the plastic together
well. Anyhow, here’s the end result of
tonight’s little project. It fits my
buckles well. Now I just need some
larger stock for a belt hanger to go with it 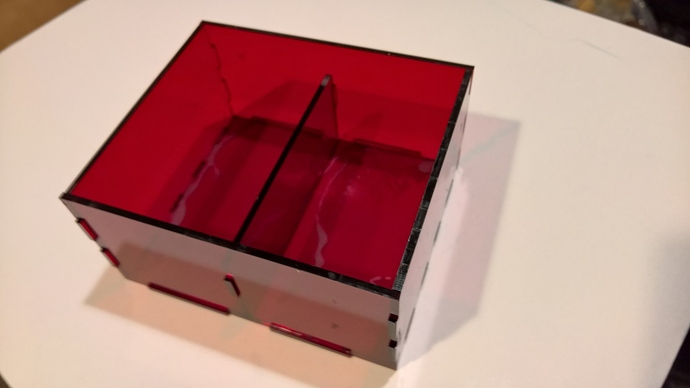 I recommend getting some cyanoacrylate glue (thick) from hobby town or the
ilk–it’s the one with the purple top. I find the thickness makes it easy
to work with and it is a very firm hold.

Yeah, I may have some superglue gel around somewhere that I could try. I’ll keep an eye out for the purple top one

Bookmarked for the link to the box maker site. I think I like that one better than Makeabox.io! Thanks.

Cool! Looks pretty good overall. Nice to learn some insight in regards to using an acrylic solvent/glue. I haven’t tried anything like that yet.

I’m gonna have to check out that site. Thanks!

Squee worthy! I’ve got an entire storage room of craft supplies in dire need of organization, and this is high on my list!

(Thanks for the notes on the solvent glue too - haven’t played with that yet, and now I know it’s gonna be tricky.)

Crazy glue makes worse joints…discolored and cloudy. When I first started using the weld-on I made a mess and wasted lots of material…lol
However, after some advise and practice, it works great! While upright, squeeze air out of the bottle and invert it, that keeps the liquid in…then just barely squeeze out a drop…you can also hold the joints inline with the needle tip and turn the whole thing over to let a bit drip out.

Great idea. I might have to try those. Especially on smaller jobs it’s sort of a pain to put out the liquid into the bottle and then have to put it back in and it probably evaporates quite a bit. Although I wonder if syringes like for insulin might be cheaper to buy and work better. I guess you might have to have a prescription for those. Something to check into

Purchase online syringe w/needle 1 Cc with U-100 insulin for dogs and cats at affordable prices. Buy U-100 insulin syringes and save an extra 5% with AutoShip.

This is nice - i like the variety of gauges on the needle applicators. Can you re-use them or is it a one-shot use?

Oh yeah…You can buy a bag of syringes without prescription. Just ask to buy a bag of allergy syringes at the counter at any drugstore. They’re very small and would be ideal.

They’re empty. My cat’s insulin is $140/vial… On the bright side I buy syringes in bulk, so I’m good to go.

Another use for them is cleaning 3D printer nozzles.

Be VERY careful with insulin syringes.
Those ones from amazon are blunt tips, they work better (less drippy) and you really don’t want to stick yourself with solvent. Personally I think it is worth the extra couple bucks. They can be reused for a while but eventually the solvent swells the rubber plunger and they get hard to use.

Those ones from amazon are blunt tips

Makes sense…getting stuck with solvent would be bad .

I always liked the thin, fast setting Weldon.
I would use masking tape to hold the parts together, and watching carefully you could see capillary action wet the joint. Positioning the joint vertically and applying from the top also seemed to help.
With straight clean edges, it was a breeze to work with.

Syringes also work well for detailed positioning of solvent or flux for soldering. Using sheet solder, you can clip off the exact amount needed for the joint, and pick up the solder clip with a bead of flux on the syringe and place it by touching the flux to the joint and the flux will carry the solder onto the joint.
Best method I developed for precise soldering on jewelry.

you really don’t want to stick yourself with solvent.

You can also buy replacement blunt tip needles in bulk on amazon. (Disadvantage is you’ve got a lot of one size, but if you know what size you need, you can just buy a bunch.)

Watch the connector types for the syringes that you have - one is luer lock, the other is slip on. Either way, a small pair of needle-nose pliers comes in really handy, because the slip-on ones can get really jammed on the syringe.

(Not a druggie…had to skin-hydrate a cat three times daily for over a year. And yes, you will stick yourself with the damned needles - they are razor sharp and quite painful.)

The sharp needle brought to mind the most useful accessory for the aforementioned dremel or hand piece.The abrasive cut-off disc.
Little 1 inch diameter wheels. Those things eat almost anything. You can also stack them for a wider cut. Not meant for grinding on the side of the disc, but I’ve been known to employ that.
As Josh recommended, they are cheap by the bag, but if I was in possession of a syringe, and needed the tool now, I would zip the point off of the syringe, because as Josh said, less drippy - and when you slip, they don’t go as deep if they are dull…

one is luer lock

When I taught English for high school students, they had a "word-a-day’ notebook they had to keep. For every word they found that I didn’t know, they got five minutes goof off period. They did have to document what they were reading so that it didn’t appear that they were just looking for odd ball words. I got stumped quite a few times. Today, @Jules gets five minutes free time in class. I don’t have a medical background at all, so “luer taper” is new to me. I think I get a new word just about every day on this forum.

Figures! Coulda really used that back in high school (sigh!).

Here’s a lab rat trick: take some Teflon tape and cover the rubber bit with it before putting the plunger into the syringe. It will help protect the rubber and keep the solvent cleaner if it happens to dissolve rubber.