This is a display for a Kenpo dojo. The sign is 3’x4’ it displays the names of the students that have earned their black belts for their age groups. Everything with the exception of the back board and the dowel pins was made on the Glowforge pro. 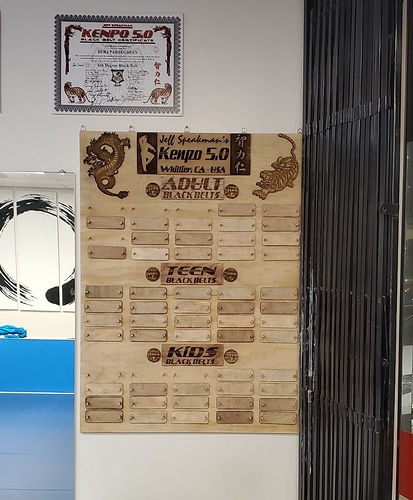 Kenpo! I studied Kenpo at Ed Parker’s dojo in Pasadena, and I used to do demos with him! Great memories!!

Jeff Speakman was one of Master Parker’s students. He started the organization that I made the black belt board for. Would have loved to have met Master Parker.

I went to college with him at MSSU (it was MSSC at the time) here in Joplin.

Oh wow! Small world. I see him occasionally at special events for the dojo. He’s a really cool guy, I definitely have to let him know about this post, he’ll trip out.

I remember him being a nice guy but really didn’t know him much. Another student from here that I knew much better ended up in Hollywood too, on The Young and Restless.