Bourbon and Lasers.... What a great combination!

Well, OK, not Bourbon yet, but a key for great bourbon beverages.

Several years ago I, as a non-bourbon drinker, was introduced to Berkshire Mountain Bourbon, and it has basically spoiled me on virtually all other bourbons. The only place I have been able to find it available for sale to (or in) Illinois is a website called caskers.com - and I am so very happy I was finally able to source some for my (home) bar.

But I thought, how to showcase it, and make it easy to mix beverages for friends and guests (if we aren’t drinking it neat) - and I decided it would be a great opportunity to try out the great $1 small bamboo cutting boards (from Dollar Tree) that were recently identified.

So, with a little bit of experimentation, downloading their logo from the company website, along with some of their recommended recipes, I was able to easily (using Affinity Designer) create this cutting board.

Oil is on order to treat it, and I would HIGHLY recommend that any bourbon fans give Berkshire Mountain a try! 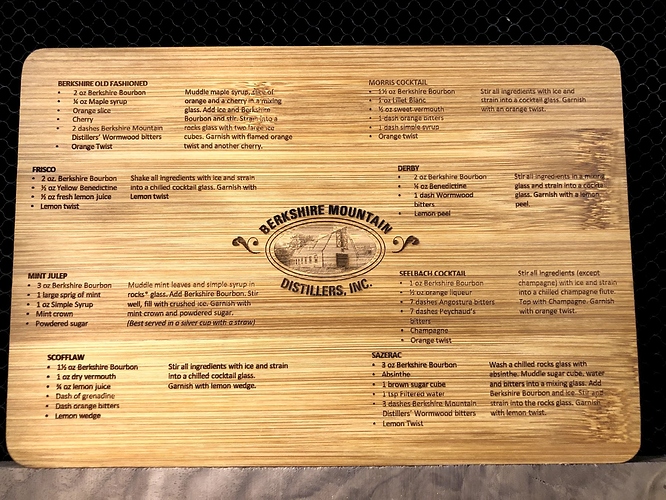 Aaaah! Small world. That place is in the same town as the high school I went to. We’ve taken to picking it up when we go back to visit

SO good! I’m not a bourbon fan, but their rum is so frickin’ smooth

<3 the cutting board! I’m betting they would too!

Once I make a few tweaks, I plan on sending them one with a note about how I found them (Amex lounge at LaGuardia) and the fact that it was SO GOOD that I almost switched my flight back two hours to my original flight, since I had swapped to an earlier one.

Lasers go well with tequila, too.

I made this as a gift for the owners of this new brand. It is quite a delicious tequila at a reasonable price, too. 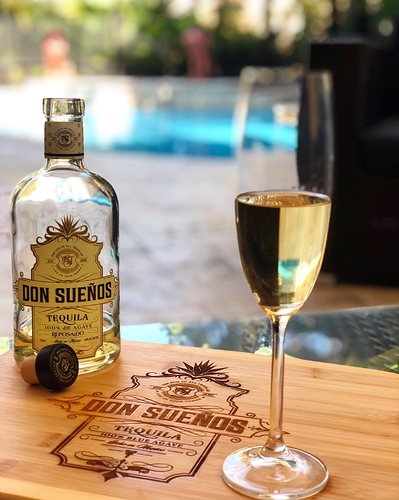 I can see this thread going downhill quickly (or rather, in a very tasty direction) - but let’s be sure not to LUI (Laser Under the Influence).

That board is awesome!

Beautifully done. May I ask what settings you used to engrave it? I plan to make a Dollar Tree run for cutting boards!

To keep this thread here (rather than moving to Beyond the manual), i’ll Send them in a message.

I’m not a Bourbon drinker; I’m more of a Scotch fan. But that looks very cool, and I can think of a few people that would enjoy something similar as gifts.

I wasn’t a bourbon drinker until I had Berkshire Mountain. And the problem is, I haven’t found any other I like better! Several friends who are big Scotch fans have loved this as well.

As much as I like to share info about Glowforge, I’m an equal evangelist for Berkshire Mountain Bourbon. If you are willing to take a (very slight) risk - and since it looks like you were an early backer, you clearly are… Use Caskers to order a bottle - and I bet you will become a big fan.

And as proof that Glowforge isn’t the only place that has issues with shipping… I just discovered that Caskers no longer ships to Illinois. (UGH!)

Luckily, I did find another online source, as well as liquor store in the northern suburbs that had a few bottles, so I have placed a few orders!

Board looks great, but I can’t think of putting good bourbon in a mixed drink. If you find it try Heaven’s Door Tennessee Bourbon.

I’m pretty much only drinking this neat or with a nice stone. The board is more for a showpiece than something I will actually use to mix drinks.

This bourbon is, as you say, too good for that most of the time.

That’s a great idea! I have a bunch of those cutting boards and am trying to come up with ideas. Something for my bar cart would be cute! I love bourbon but haven’t tried that one. I’ll keep an eye out!

The engraving turned out really nice.

Thanks. Version 2 was even a little better. I may need to tweak a few more things to get the perfect V3.

The only place I have been able to find it available for sale to (or in) Illinois is a website called caskers.com - and I am so very happy I was finally able to source some for my (home) bar.

Drop me a PM. I can run up to the distillery and get you some. Easy enough to ship if your Caskers alternatives runs out.

Thanks. I found a local store that had two bottles, and another online company that ships to Illinois. It appears that Caskers dropped the distributor that handled their Illinois spirits (or at least many of them) and IL laws (I have learned) are quite complex and restrictive when it comes to Spirits and importing from out of state. For example, any individual is only allowed to personally import one gallon of non-wine / non-beer alcohol per year, and if a company does not have a local presence, they are not allowed to ship ANY spirits into Illinois.

Apparently Caskers doesn’t stock most of their own - they rely on a network of distributors - and they no longer have a distributor for Berkshire Mountain for Illinois .

Interestingly enough, since I left three bottles in a cart yesterday, they have sent me two separate marketing emails telling me to “trust my gut” and “You forgot something.” (So I suggested that their marketing / ecommerce folks need to add something to their routine to check to be sure they are actually able to ship product before the pester me to buy it…

But I REALLY appreciate the offer, and may, at some point, take you up on it. (2 bottles are schedule to arrive today, and 4 more later in the week, so I should have a pretty good supply for a while!)

appreciate the offer, and may, at some point, take you up on it

NP. It’s near an outlet mall my wife is always happy to visit

One if the outlets is Lindt Chocolate and there’s a Harry & David’s so plenty if reasons to run up there. My 2nd son is a big bourbon fan too so it’s a good source for gifts