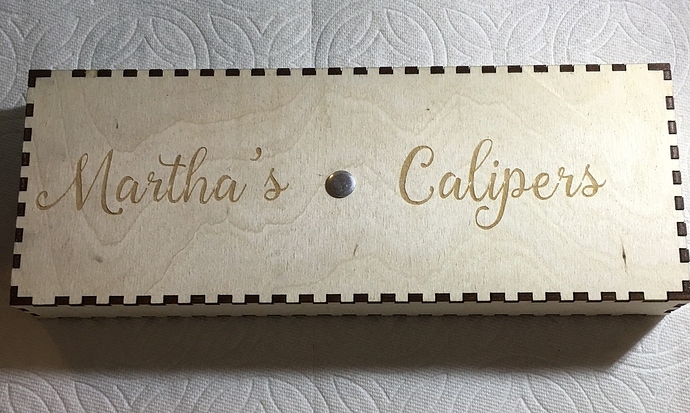 Oooh! Nice box! Never thought to give the calipers a home of their own, but I should…I’m always hitting myself on the pointy bits!

Thanks Jules! (I needed one with my name on it because DH would be likely to borrow it, then it would disappear forever into the depths…)

Ah yes, I know the gig. We’ve got something like four sets of battery operated drills around here that DH keeps “borrowing” for his projects and conveniently forgetting to return. With four, there’s at least a small chance that one will be charged up.

My ex took things a step further. After he borrowed it, he would put iit in HIS toolbox, which I was forbidden to touch. And then it automatically became his. When we moved to Japan, I discovered they sold tools in all colors of the rainbow. He was deathly allergic to the color pink, so I slowly accumulated pink replacements for all my missing tools, and even pink pegboard to hang them on. Not a single pink tool ever ended up in his toolbox.

Cool box! If mine hadn’t come in a box already, I’d be making it.

We solved the calipers borrowing thing. Back a year or two ago when one of the early forum enablers posted a deal on one, I ordered. DH really liked it so we ordered one for him too.

That wouldn’t have worked with my DH. He believes i having multiples of everything!

thanks for the file

Little tip for working with punctuation in script fonts:

Don’t type your apostrophe in the same block as your text. Type your text without the apostrophe, then type the apostrophe separately and position it manually. That way, your letters will be connected as they should be. (Also, it let’s you put the apostrophe exactly where you want it. I find many script fonts place them too high for my taste.)

Also, you should use a boolean operation (Unite in Illustrator) before converting your text to a compound path. That will eliminate the hollow spots you’re getting where the letters overlap.

Thanks for the file! I made this box and then some lady named Martha came by and ganked my calipers!?!

Nice! Although I don’t need a box for my calipers … I might need it for something else! Thank you for sharing your file.

Darn…I was all ready to change my name.

Not a single pink tool ever ended up in his toolbox.

Genious… (we are not worthy!)

Hey, I’m secure enough in my masculinity to use a pink tool.

I’m secure enough in my masculinity to use a pink tool.

Which may be part of why I like you more than him.

store my calipers in

You are suppose to store them?

I got a specific ‘place’ for them, which amazingly is at the front of the low shelf and on top of the box they came in.
Might be a guy thing, this ‘almost’ put away concept.

The ability to a create a custom solution, and to bring a whim into reality with ease makes the glowforge a favorite tool.
I bought an expensive set maybe 30 years ago, not because I needed them but because I was bucks up and they were the first digital calipers I had ever seen… and because I’m a gear head.
When I got the pre-release unit, one of the first things I did was to scan the calipers and cut a profile insert for the case they came in to replace the cheap vacuum formed plastic insert that had cracked over the years - But since I use them almost every time I use the laser, they live on the glass top to the right above the button for quick access.

Also, you should use a boolean operation (Unite in Illustrator) before converting your text to a compound path. That will eliminate the hollow spots you’re getting where the letters overlap.

Great tips! Any idea how I would achieve this in Inkscape? Thanks!