Originally thought to engrave the Perspex, so the coins held everything together. Stupidly didn’t remember that it would be white and you wouldn’t see the coins, so had to go for screw holes instead. Still that’s the point of practice right. 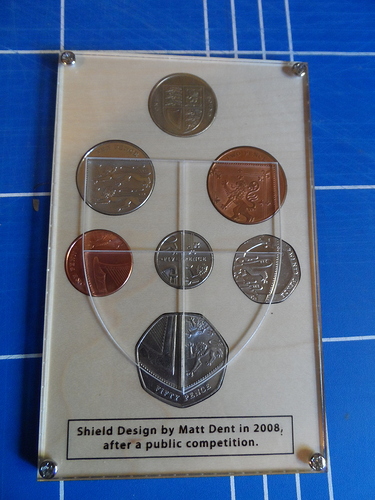 Not a bad solution, if you ask me.

Defocusing the engrave makes it much smoother… perhaps a flame polish after would make it optically clear? I doubt you’d get it exactly how you wanted it that way though.

A frame where the perspex is captive would do the trick too.

All a matter of how much time you want to spend on it.

Did think about a frame, but wanted to keep it fairly simple. Might take the screws out and redo from the back as they are flush at the other side.

Yep didn’t want to spend lots of time on it. Will keep defocussing in mind for future practice.

Very nice, maybe a different type/look of screw. Looks good to me though.

This is a great idea! I collected all of the coins on my last trip to England, and they’re just sitting in a little ziploc bag, because I didn’t know what to do with them, but now you’ve just sparked ideas. THANKS!