Calvin and Hobbes visit the Grand Canyon and Emergency Ketchup

Just finished a couple more projects that have been in my head and on work bench for a while so I thought I would post them to show you what I have come up with.

I am a lover of the cartoon strip Calvin and Hobbes and had seen a classic drawing of them flying through the air with their wagon. Hobbes being thrown out and Calvin tied to the wagon with an umbrella in his hands. The original drawing was them flying off of a dock heading toward a lake. I took the image about five steps farther with them jumping into the Grand Canyon.

I tracked down a good image of the Grand Canyon and had it blown up poster size with the process being done by Vista Print. This was the easy part. The image was mounted (by Vista Print) on to what looks to be plastic coated foam core.

From there I figured out how large I wanted Calvin and Hobbes to be as I did not want them to be either too small or too large for the idea I had. I created both of them using my Glowforge and then coloring them with brush markers I had found at Hobby Lobby. I did not want to use any paint on them that would be glossy as I simply wanted them to be a flat color.

After I had figured that all out I worked on a mounting setup for the display. Being that the Grand Canyon picture was very thin I wanted some way to offset it from the wall when I hung it up. This was done using a framework for the actual mount that would hold the picture up on the wall along with four small corner offset mounts. All of this was done using medium draft board. With the display being mostly foam core it is very light weight even with the draft board mounts. Made it and easy task to hang on the wall.

The emergency ketchup display was a redo of the same idea only done much better using the Glowforge. Years ago I was at a restaurant and wanted some ketchup. The waiter had come back with two small bottles of ketchup. One I used and the other I took home with me. I had made a display case for the small bottle of ketchup and had it in my kitchen for years. Over time it progressively look worse and worse as the stored ketchup got older and older. Not good to be sure. So I always planned on remaking the display. I managed to find the ketchup bottles online with some searching and bought a number of them. This time using the ketchup and then figuring out how to make fake ketchup. This took several tries to get to the color that I wanted using epoxy resin with a small amount of mica powder mixed in. This way the color would not change and the display should last a very long time. Something fun for my kitchen. 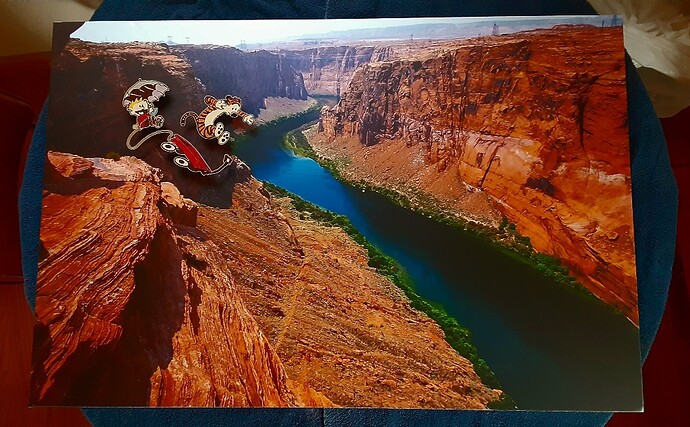 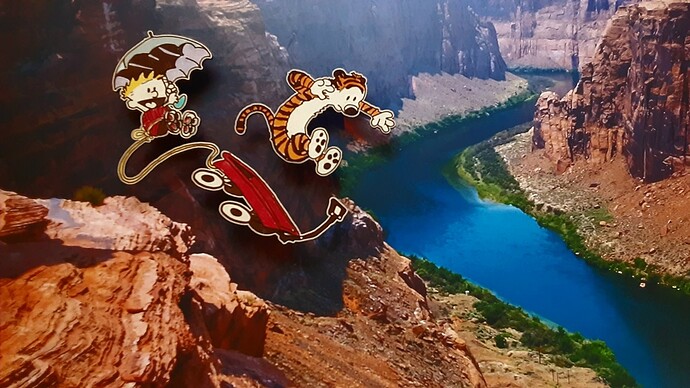 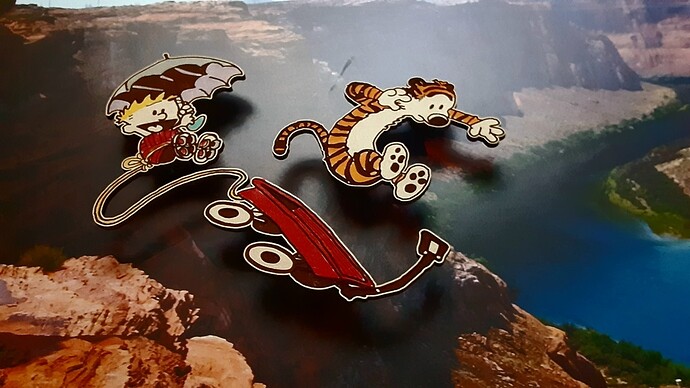 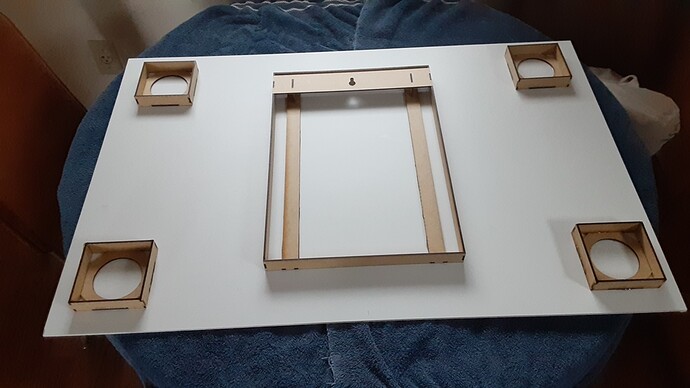 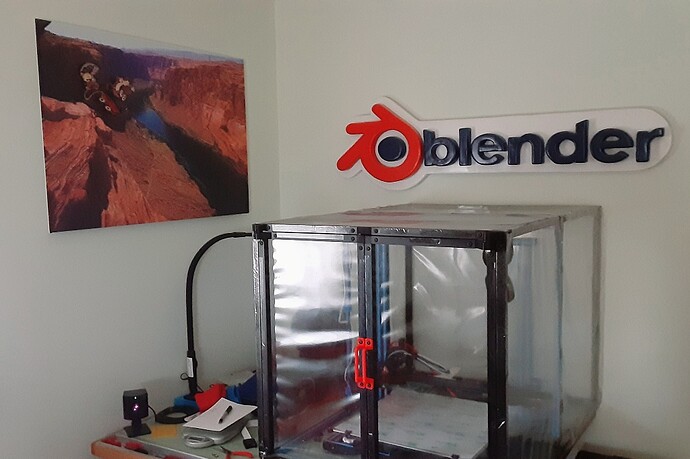 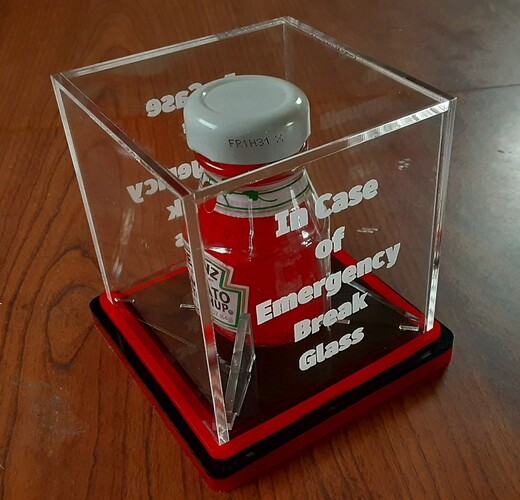 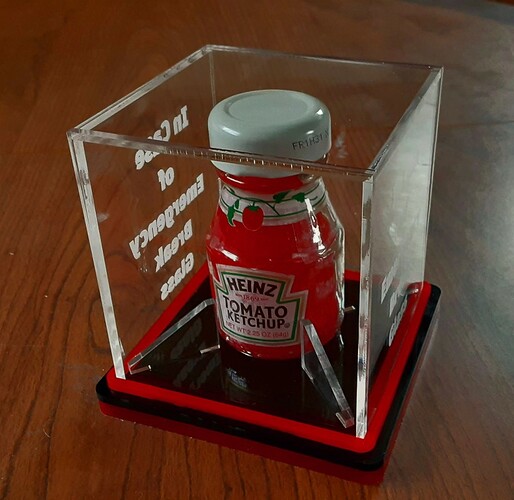 These are both awesome. I love the Calvin and Hobbes jump:-) Great job!!

Thanks for sharing. These are terrific.

Clever way to create depth using the stand-offs on the back. I really like it.

These are so fun! I love them both.

That said, I doubt we have ever had one day without ketchup in our house. If I didn’t realize it when our kids were little, I have learned that it would be seen as a catastrophe in the eyes of my grandchildren.

The other day our 4-year-old granddaughter told me to try my carrot sticks dipped in it. Oh my. (I obliged … but, no … they don’t belong in ketchup).

I was hoping the two ideas were linked as one as using emergency ketchup to save oneself from falling into the Grand Canyon seems like something Calvin would think up.

Both are great, however, as is the Blender Logo above the 3D printer. I only wish my 3D printer was as easy to operate as the Glowforge.

It happens.
Had a cousin who refused to eat anything unless ketchup was applied. They eventually stopped fighting it and just lathered it on everything. Lasted into middle school if I remember right, so without checking with them I reckon he outgrew it himself.

Awesome pieces, @davecc . I love me some C&H myself.

These are amazing and I love the ketchup idea, I have a mini bottle of tabasco that I would love to do something similar with!

Great projects and really fantastic color work on Calvin and Hobbes! The markers really give a look authentic to the comics. I see you mentioned the mounting was cut from medium draft board, but what material did you use for Calvin and Hobbes and did you engrave or score any of the lines/details on the material or was all that added in with the markers? Very inspiring, I’ve had the urge to emblazon those two onto a number of projects, but I had always planned to keep them black and white, now I can see how much better they look in color!

Hello Cthagerthy,
Thanks for the kind words about my latest creation. It was a long time coming as I had planned on the project quite some time ago. Calvin and Hobbes were made using Medium Draftboard. They were first engraved, then cut out. Calvin, the rope, and the wagon were all made in one piece. This made it much simpler to mount them onto the Grand Canyon poster board. If I was going to make a much large display with Calvin and Hobbes I would probably put it together using colored acrylic. But only if I could find the exact colors to make it all look right. For now I am very happy how this project turned out.