Can pulleys come off the axles over time?

I’ve noticed a small lack of alignment in smaller engraves growing over time. Different steps of a job might drift a fraction of an inch. Normally it probably wouldn’t be noticeable but I’m working with details an eighth or sixteenth of an inch in size, and placing them near scores and edges.

In the first two or so years Glowface was always on his marks, he’d burn stuff right where I put it! This has started happening in the past year, maybe year and a half.

Also, cuts are a bit less precise than they used to be. I’ve noticed when cutting an enclosed shape where the beam has to come back to its start point, it’s getting close (still less than the beam’s width), but not quiiiiite to where it started, the return will be a little skewed left/right for a vertical line or up/down for a horizontal line. Where for the longest time the laser was pretty much meeting its exact start point. Inside corners also show a bit of…momentum after making the turn that wasn’t there before.

I understand this is a mechanical device and subject to wear, but I’ve been hoping it was something due to a maintenance issue, and I’ve asked about this before, and the general advice was “maybe belt tension”. The error was really small, so I figured maybe I was being too picky and went on and didn’t worry about it. But it’s gotten a bit more noticeable in the past few weeks to the point that my work is getting harder to produce, so I decided to revisit the belt tension thing.

I opened the lid and poked at the belts, and they still felt pretty tight. I can’t get them to touch in the middle of side or under the gantry without a good deal of force.

I did notice, however, that the right side belt wasn’t as tight as the left one. I checked out the pulley at the rear however, and noticed it seems all the way back already.

Then I took another look and I was like, whoa, is the pulley supposed to look like that?
There’s about a sixteenth of an inch of the silver axle of the pulley visible between the pulley and frame piece beside it. The front pulley doesn’t show this, it sits snug against the metal piece behind. This difference skews the belt a bit from front to back.
The left side belt pulleys don’t show any differences.

I took pictures under the gantry and noted that the right side head pulley shows the same issue, a bit of axle is visible, which I don’t see on the left side head pulley. This also skews the belt a bit from left to right.

I don’t think this would affect belt tension that much, but it might explain the loss of accuracy over time.

I pushed gently on the right rear, and the pulleys are not loose on the silver axles.

Of course I took some pictures.
Right rear pulley, does it need to pull its pants up? 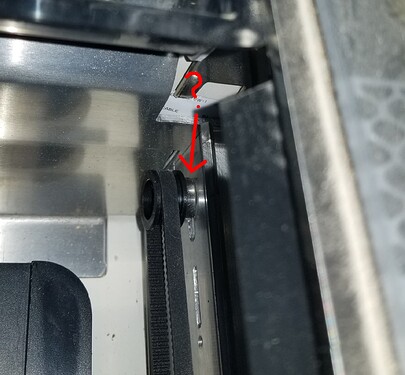 The back left pulley however sits snug against the frame, and seems to be doing a better job of keeping up appearances: 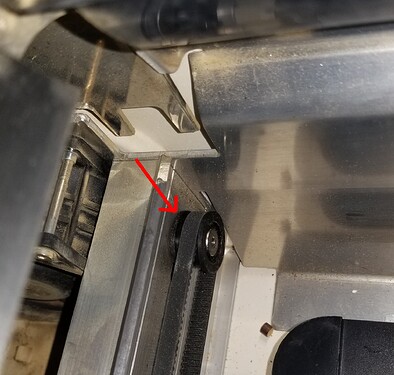 Underneath the head, is the right side pulley falling down on the job, literally? 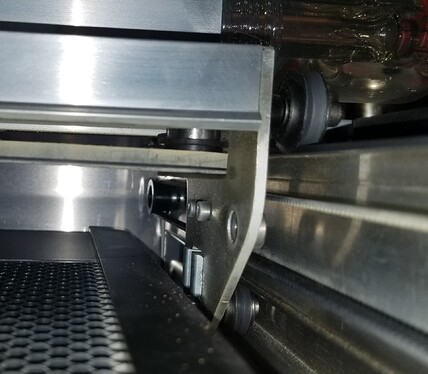 The left side head pulley doesn’t show any sliver of silver: 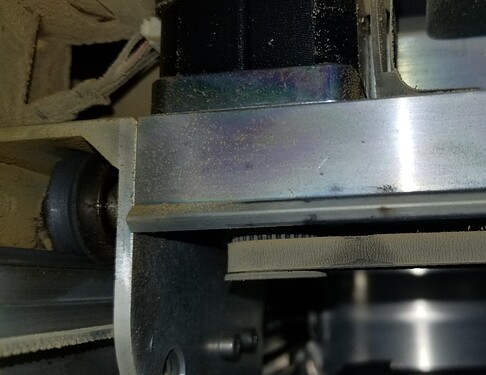 I’ve never looked this closely at the pulleys themselves, so can’t say for sure they haven’t always been this way.

Is this some setting applied to the pulleys at the factory, and this is normal?
Or is this something that’s happened with time?
If they’re slipping, should I be concerned with them coming loose at some point?

If these are slowly letting go, are the pulleys a serviceable item?

i think (THINK) there is an Allen key adjustment, in one of the discussions they mentioned something like it, do a search for pulley alignment / Allen key - see if there is anything that can help you.

It may not be the right link…

Thanks for the info.

I have been looking at the belt maintenance pages. From what I can tell this one’s belts still have good tension and aren’t clogged with debris. It also looks like the pulleys are already at the max adjustment (though I haven’t tested that theory).

I’m just like, whoa, are they supposed to look like they’re coming off of their axles? They don’t seem to wobble or anything, maybe this is an adjustment made at the factory I never noticed before.

Oh hang on, I now see that you later linked to a thread about replacing the pulley altogether, which I had missed in my earlier searching.

So the pulley is a serviceable part, and that replacement pulley looks like it’s all snug on the axle, unlike mine. So that makes it look like I may be buying a new set of pulleys. Thanks!

they sell the pulleys on etsy, I’ve seen em (and wondered ‘what the hell are they selling those for)’ LOL!

I believe that’s abnormal for the idler to separate like that. Not sure what effect that might have…
Also inspect the head carriage wheels, there have been issues with those fracturing along the groove.

Hello! Thank you for the amazing details and photos in your post. You are correct, the next step is to go ahead and replace those pulleys. You can expect an email shortly with more details about getting the replacement order process started! I’m going to ahead and close this thread out.