I made these for table decor for a show that a friend produced over the weekend. The design was inspired by a Moroccan screen that I saw and fell in love with. I made a first version that is 8" tall, but decided that it’s probably too large for restaurant tables. I cut that down to a 6" tall lantern that ended up being perfect. I made a keyed holder for the candles, though it could be left out and a pillar candle used instead. I have a pile of LED tea lights that I used for the show, though most likely a real tea light would work in it. I didn’t have time to test that theory to see if my glue would hold up to the heat of a tea light. Something to play with this week I suppose.

I didn’t have time to order materials, so had to use what I could find locally. I wanted 1/8" mdf, but could not find any plain. What I did end up with was marker board/chalk board on mdf. It cuts beautifully, but man does it make a mess. I had to clean the machine several times in order to keep the cuts from not going all the way through the material. Cleaning for the most part isn’t too bad, but dang it’s hard to get to the fan in the back. At one point, the fan was so dirty that the smoke started curling up thru the lid. Eventually I found that using a 1" chip brush to get into the fan grill with the vacuum hose right next to it was a pretty good fix. I even took a duster to the inside of the exhaust hose just to be safe. The cable track gizmo on the fan side is quite filthy and I can’t get to it to clean it properly. Sigh. That’s next on my figure out how to clean list.

Several people were very interested in these at the show, and I have even gotten an order from the restaurant to make enough for all his tables. Bonus!! 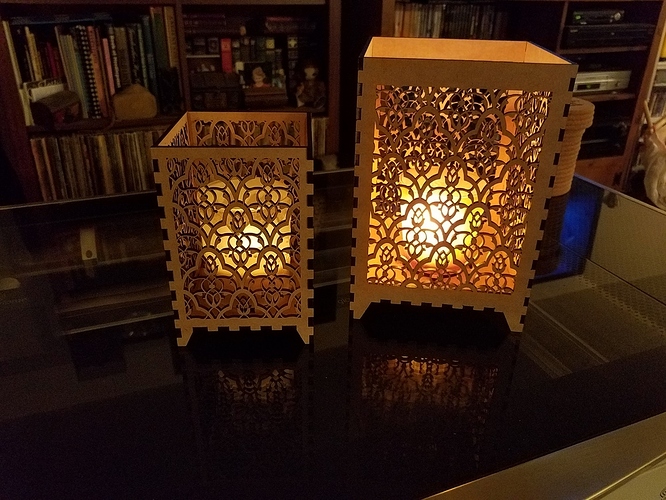 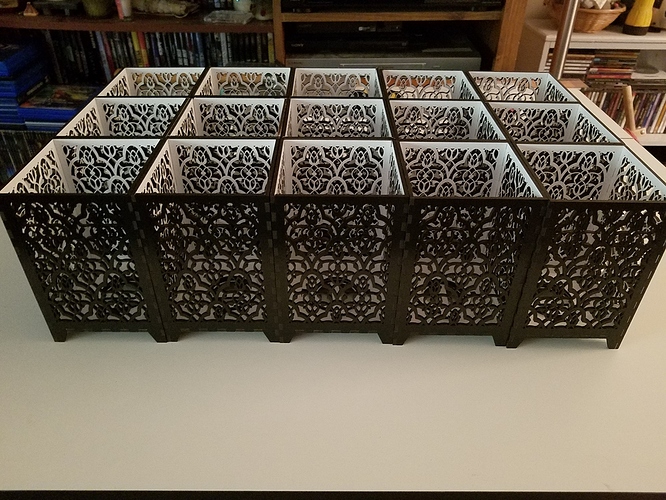 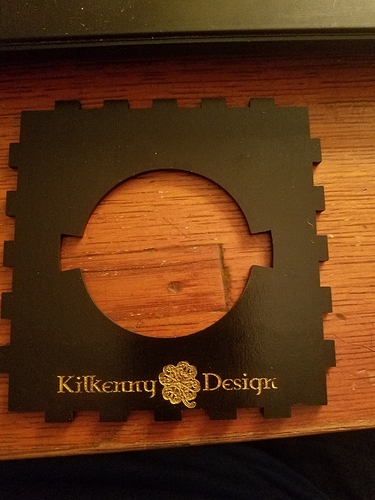 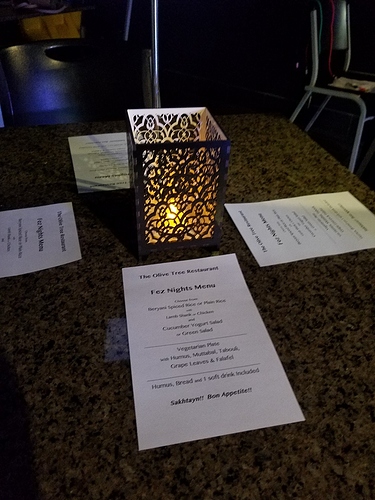 Can’t see the pics but sure they’re great!

Thanks, I just realized that. Editing to fix.

Intricate and lovely! I like that angle that the legs take at the bottom.

Very Nice! Congratulations on the restaurant job!
After the warranty turns into a pumpkin the first mod to this machine will be to open that fan grill up a bit.
It’s there to prevent contact with an unguarded fan (liability), but the exhaust duct makes the grill redundant - and the grill presents a surface that face-loads, restricts airflow and is difficult to clean.

Those are really pretty!

Stunning! Great you got a commission order. this is on a huge bucket list.

I’m not as worried about changing the grill openings as I am interested in being able to get at the stuff from the inside to clean it. I’m concerned about the cable track getting all gunked up and causing trouble down the line. If the top opened up so that interior cleaning was possible, I’d be happier. Even a baffle that tracked with the gantry would make me happy. At least then it would be something to keep the mess off the important stuff.

Way to help out a friend! These lanterns are exquisitely detailed.