Edit July 14 2021: So, to let any future thread searchers know, the focus window is not self removable as of June 2021. They sent me a new print head because of this (and because they have awesome customer support). That did not fix the issue (see below for a description of the issue). They sent a new belt and new right-side pulley. That did not fix the issue. They have decided to replace my Glowforge at no cost to me. It seems the stepper-motor is also not owner-removable as of July 2021.

I’ve been having distorted engraving and cutting issues with my Plus.

Edit: I should note that this picture is rotated 90 degrees from how it was actually printed. The long side was printed horizontally. 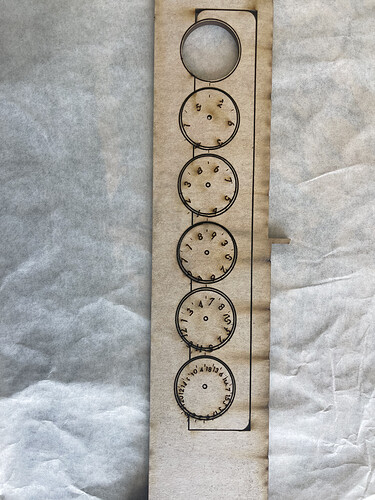 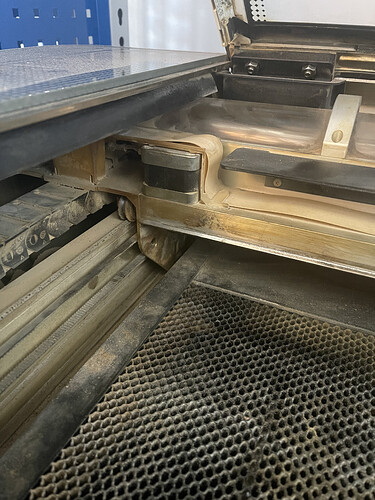 IMG_10523024×4032 3.18 MB
So I’m pretty sure something is going on with that pulley or the motor. However, this top small window (see third picture) is collecting debris on the inside, and I have no idea how to clean it, nor do I know for sure what its function is 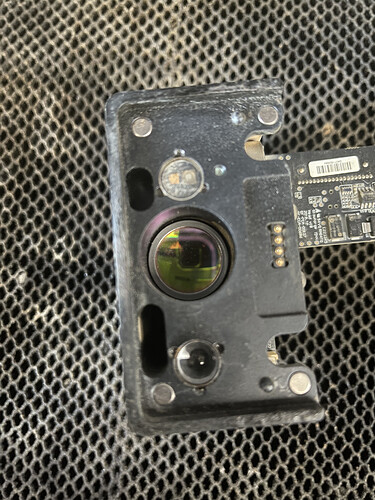 I think the first thing I would do is eliminate some of the variables.

You have a lot of debris on the motion system itself. I would clean all of the rails where any of the wheels/bearings (both X and Y) are riding, and the wheels themselves.

this top small window (see third picture) is collecting debris on the inside, and I have no idea how to clean it, nor do I know for sure what its function is

These windows are what the head bounces the red laser through to judge location and height - usually you can just wipe the exterior, but if stuff has gotten into the inside you might eventually have issues getting things to focus. A staff member would need to specify whether it’s ok to pull that out, clean it, and re-glue it.

and yeah, I echo @jbmanning5 on the do an overall cleaning and see if your motion problems fix themselves

Yep. I cleaned all of the pulleys involved and the rail arm where they attach. I agree the rest of the machine is pretty filthy, and should get a good cleaning, but the carriage moves perfectly smoothly when the belt is not attached. It’s only when I attach the belt to the motorized pulley that I get the same non-smooth resistance. I would remove and clean the motor and attached pulley once I get a go ahead from Glowforge.

I agree the rest of the machine is pretty filthy, and should get a good cleaning

FWIW, I don’t believe a machine needs to be pristine so no judging lol. I can just see a lot of build up on the wheel visible in the pic, the rail it rides on, and the front lip of the gantry.

I think it could still be debris-related, which might make even more sense with the system under tension vs moving smoothly when not under load/attached. But maybe not if you’ve cleaned all of those post-picture. I’m sure they’ll be along in a bit with some suggestions.

I also am not fanatical about cleaning, but every time I clean my optics, I use the wipe to clean off the rails.

In your case, I believe the belts themselves may also need a little attention.

Hi @jesse.stommel. I’m sorry to see that you’ve run into issues with engrave results printing with some offset. I saw you noticed it occurring across the x-axis and to help me troubleshoot any potential cause, can you please send me the following photos?

1.The belt under your laser arm with the head pushed to the left:
​

I also noticed some potential issues that can contribute to unexpected print results based on the photos posted. As other owners have mentioned, there is significant debris and build up on printer head side focus window, as well as the rails that move the laser arm. These can impact the ability to accurately print, and could use some extra cleaning and maintenance to address this. 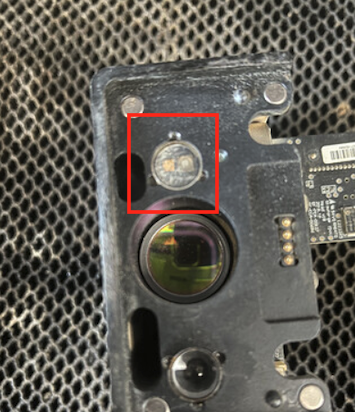 Once received, we can review any photos to decide on any next best steps to get this resolved. Thank you!​

if it moves just fine without the belt attached.

there are only two things left.

and yes GUNK is a technical term.

3 The right side pulley under the laser arm from underneath: 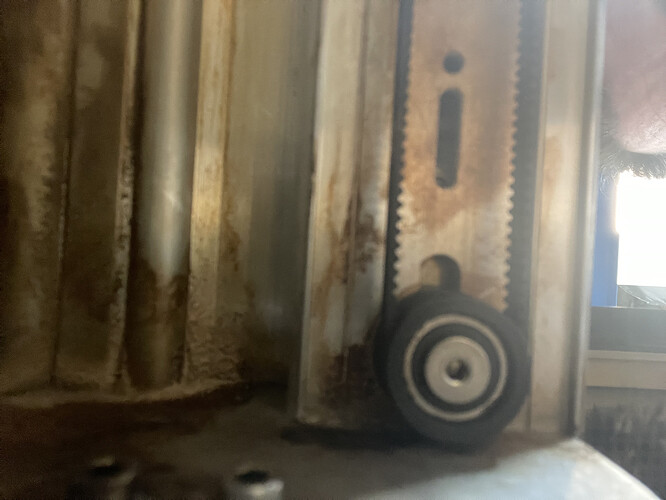 I also cleaned the rails, pulleys, and belts that move the laser arm along the y axis. Motion is still smooth and free along the y-axis. Prints are still deformed along the x-axis. The left and right motion of the laser head/carriage with the belt attached to the motor continues to give sinusoidal resistance (Glowforge powered off). Still don’t know how to clean the inside of the printer head side focus window.

been a bit since I moved my carriage around. but I don’t recall a variance in resistance.

Yeah. I can compare it to my pro, which moves freely and smoothly by comparison. And it is printing just fine.

so the stepper motor must be the problem.

only thing I can think of is a forum search. I would think that in a short time you’ll have a staff response. as you’ve basically ticked through the rest of the possibilities.

Yep. Couldn’t find anything, though I’ll admit I’m not the best at the forum search function. I didn’t want to e-mail support because I want the response public. (I dislike it when a forum thread ends in a “We’ve responded to your email with the super secret solution that we don’t want anyone but you to know about”

Thanks for looking into this, by the way.

HI @jesse.stommel. Thank you for the detailed photos. Our team has determined that, at a minimum, you’ll need a replacement print head. I’m going to reach out to you via email to coordinate next steps, and I’ll also have our team’s mechanical expert review your case further so we can continue to investigate the issue with motion along the x axis

Hi @jesse.stommel! I appreciate your patience as we reviewed some of the additional trouble you’ve been experiencing. Based on the log files we’ve extracted from your Glowforge, as well as the photos you’ve provided, I’ve emailed over the next best steps directly. We’d like to replace the Pulley Assembly & Carriage Plate Belt, and see if the same behavior occurs while printing.

Once you’ve responded to the direct email, we’ll go ahead and close this thread.

hey all let us know how this shakes out, as to what the problem was.

Surely this will happen again.

I see that we are working with you via email so this thread will now be closed.