Center item getting re-centered by GFUI

Trying to cut a coaster and it looks like Glowforge’s software is taking this SVG:

Edit: Weird, the center SVG I’m trying to engrave showed up locally but not on the web UI, here’s what I’m seeing locally: 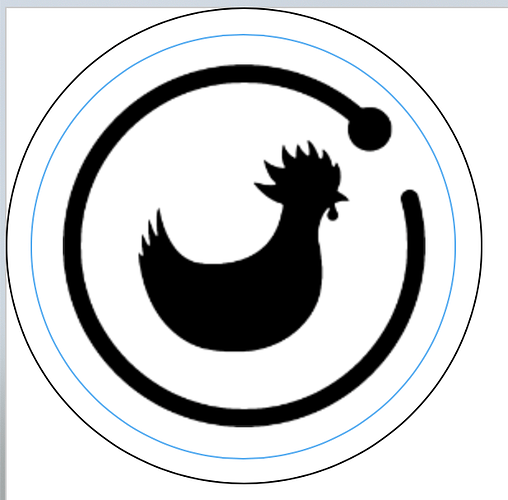 And deciding the SVG in the middle of the coaster is its own thing that needs to not be where I put it in the SVG: 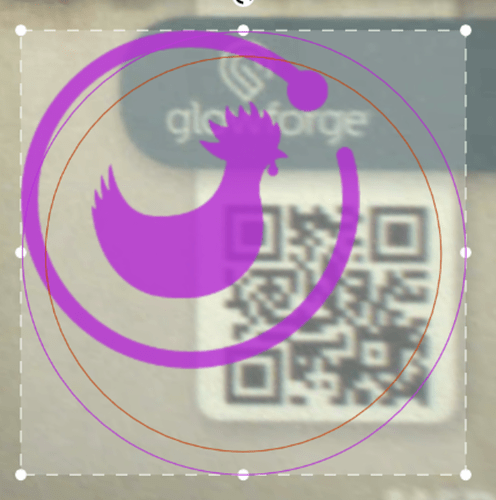 I tried uploading as a PNG but then it wasn’t able to distinguish the layers. I know I’ve accidentally moved one layer in a multi-layer SVG that was imported to the GFUI in the past but of course I couldn’t do it on purpose. Any hints?

For what it’s worth I’m using Pixelmator as my image editor.

Edit: Weird, the center SVG I’m trying to engrave showed up locally but not on the web UI, here’s what I’m seeing locally:

If you zip the SVG, it’ll retain the bitmap when you share it.
The forums strip the bitmaps out cause they can be so big.

OK, good to know, thanks!

I tried hand editing your SVG, turning the missing chicken into just a rectangle, and things worked fine.

If you can upload the original, I’ll have another look. 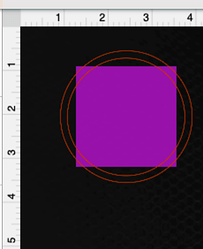 Sure thing, here you go! Thanks for your help.

Aha, is it because the outer ring and the chicken are the same color?

Interesting. It’s what I thought.
And this is a good bug report for GF.

Your SVG uses the <use> tag, which is used to reuse a defined shape elsewhere in the SVG.

Pixelmator embeds your bitmap as a defined <image>, and then uses <use> to position it.

The easiest fix, is to not use the symbol definitions and the <use> tag. For your workflow, I’m not sure if you can get Pixelmator to export differently. If you screenshot your export settings or whatever, maybe I can give you some guidance.

But at least for this file, I fixed it manually for you, in two ways.

The first, I just removed the <use> and put the <image> directly where the <use> was.

The second, I put the x and y attributes from the <use> on the <image> in the definition. This actually renders incorrectly everywhere else, but worked correctly in the GFUI, which is maybe further evidence the GFUI has a bug.

@GF Staff folks… if there’s a better way to file a proper bug like this, let me know.

Yeah I was looking for a way to control some of it but it wasn’t working - good to know about this limitation! Thanks for your help!

You might consider grabbing Inkscape for vector laser stuff.

I used to use Pixelmator back in the day. It’s really great. But I didn’t think it even could export SVGs.

The color wouldn’t make any difference as to where the image lands so I don’t know why it was going away from center for you assuming you had it lined up in what ever program you created it in.
I use inkscape and from reading this thread you are using a different program which I have never heard of so I can’t offer any help with that.

Yeah I think they added SVG export to a more recent version. It’s mostly what I’ve been using since it’s got a nice grid system that makes finger joints reasonably easy to design (though I still have to figure out kerf stuff).

I think I totally missed that you can use Inkscape on a Mac, for some reason I thought it was PC-only. I’ll check it out!

There are some excellent suggestions from our other forum users here. Thank you @jestelle for surfacing that Pixelmator bug.

@designatednerd I would recommend downloading Inkscape and following our Optimizing your Prints support page for future files.

Would you let us know if the trouble is resolved?

In the GFUI when an item is highlighted the precision location UI comes up on the bottom right. As you highlight each item the location will come up based on nine locations. The default is centered, and when each item has the same location they will all be centered no matter what has happened before.

I couldn’t figure out a way after importing the SVG to highlight individual layers - it would only highlight the whole thing. That’s why I couldn’t re-center the chicken manually. Maybe something to do with the way Pixelmator exports the SVG.

The “fixed” SVG from @jestelle worked great and other SVGs I’ve used from Pixelmator have been fine, but I’ll download inkscape and give it a shot. Thank you!

Thank you @jestelle for surfacing that Pixelmator bug.

I have had this issue with Svg vectors from Gimp, but taking each through a “Union” of each part alone, and it dumps the bad stuff (though I have to give the outline a thickness.)

I have had this issue with Svg vectors from Gimp

If you have other examples you wanna share, I’m happy to look at them and see if it’s the same issue. Maybe help motivate GF to fix it

It never sees GF before fixing so I do not know. However if you have an image in Gimp and make a mask, then you can turn that mask into a path and export the path as an svg, which can then be loaded into Inkscape

I have found it to be the best result when outlining a raster object.