Centering is suddenly not even close

Between one job and another on the same material sheet the centering has gone wildly off. Not even consistently so. In the photographed example one circle is correct, 2 are wildly off in different amounts and directions.

Still can’t figure out what’s even going on because it’s not the same amount or direction.

You can see the red “to cut” circles, and the dark actual cut circles underneath. And a clearer view of the cut circles. The third image shows you where the third circle TRIED to cut. 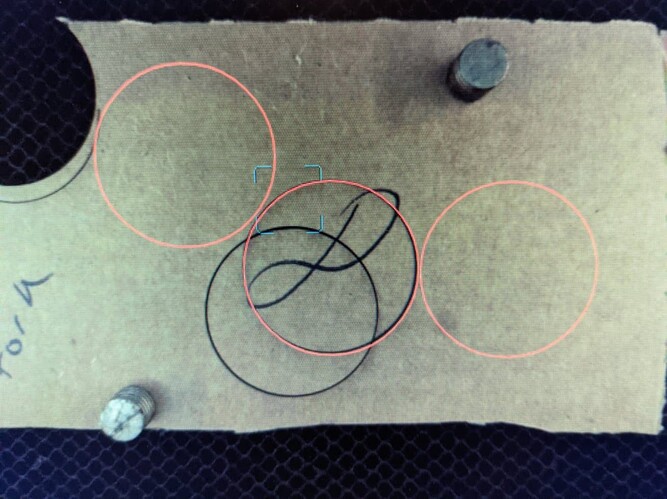 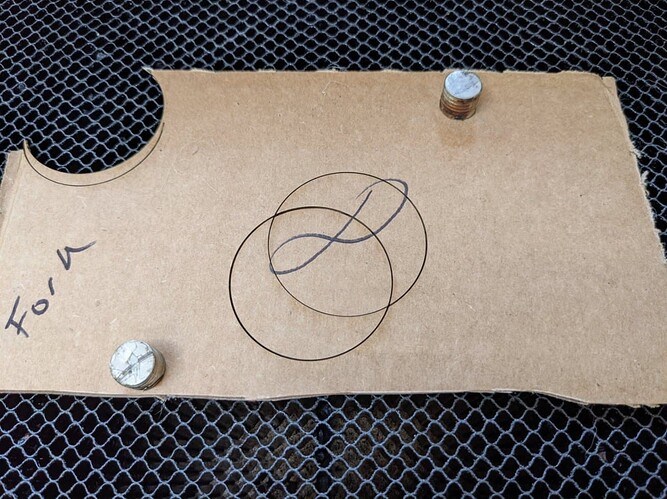 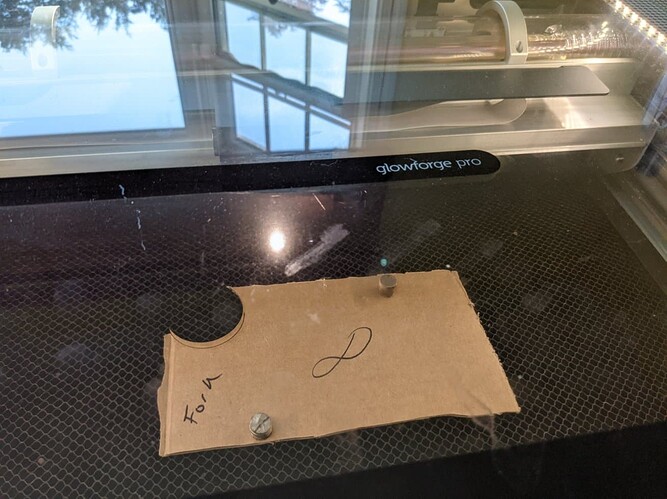 This is a problem I haven’t read about, and I have been reading the forum for 5 years. Can you repeat the behavior if you don’t have magnets on the bed? I suspect you use them all the time, but it is the only thing I can see in the picture that is different than my workflow.

And yes I use them all the time, but it doesn’t seem to make any difference with or without.

My best guess is something went wrong with some sensor that tells the motor where it is in relation to the reference point.

I hope support doesn’t close this thread before there is some explanation of the cause. There should be some sort of prize for the first user with a unique problem.

It was impressive because it was literally between one cut and the next, no big bumps or jostles or anything between.

sensor that tells the motor where it is in relation to the reference point.

No sensors around this — it’s an open-loop/non-feedback motion system.

Just to clarify, by the centering, you mean the overlay accuracy, right?

When you turn the system on, it calibrates the logo on the head to the lid camera. But if anything happens after that that causes the head to move (or impedes movement), there is no feedback that shows how many steps were lost - so from there, it’s lost.

If a belt is bound up, or twisted, or slipping, all of those will cause the head to lose position.

With the system off, I would move the head and gantry around feeling for any spots that feel different. Then, I’d inspect the y-belts. Then, I’d pull the carriage off and inspect all of the wheels and the belt itself for any damage or wear.

I would also double check the white ribbon cable while moving things around to make sure that’s installed correctly and not twisted, and not catching anything. That can make prints to funky also.

I said “centering” but it’s really not the centering. It’s the… I don’t know what. Because usually if it’s the centering, the whole cut will be shifted one direction or another. In this case it’s not. One piece of a cut will be way up, then the next on-position, then the third down and to the left, all within one run… But there’s nothing I can see in the belts or rollers, especially not that would have shifted this drastically between two runs minutes apart.

As for sensors, it doesn’t have to be an actual sensor, but something has to keep track of how many times the motor’s turned so it can go a predictable distance. It seems like whatever that counter is might be slipping or loose or misfiring or whatever.

I would seriously consider taping the cardboard to the tray and losing the magnets…especially if they are neodymium. They can have an impact on the head beyond just affecting the fan. (I buy a lot of painter’s masking tape.)

I mean, I did try pins instead, and I’ve been using the magnets for several years now… didn’t make any difference

I’m going to echo @jbmanning5 - it sounds like something is stuck in one of your belts, or the teeth are wearing down in one area. The random movement would be explained by something sticking/slipping sometimes but not others.

I’d follow the Air Assist cleaning instructions to check that belt/teeth, and also do the same to the side belts.

Ok… so an update.

This morning I re-cleaned everything, rechecked every belt, and started everything up again. Figured, hey it’s a computer thing, though nothing’s changed, lets see… 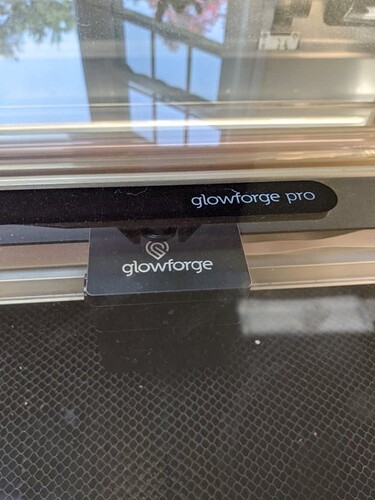 Let’s try a basic cut, with stuff lined up so I can see if it’s off. No magnets. 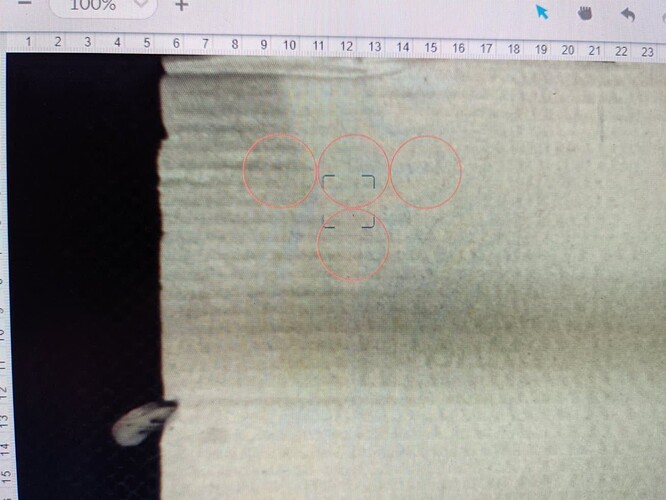 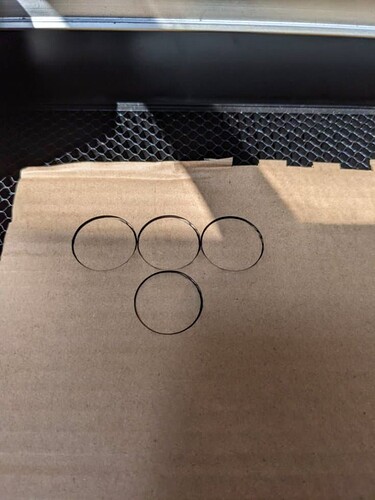 Start cutting. 4 or 5 cuts that are totally fine, great, no problems at all. Suddenly… 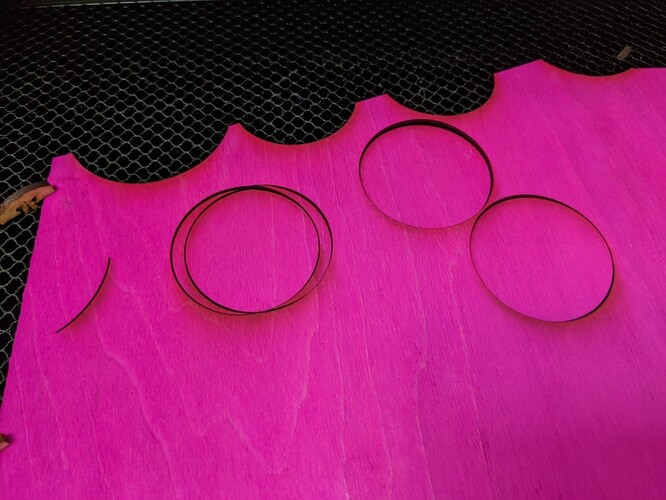 It’s cutting all over the place again. What happened?

This time before the weird cut I noticed that the app was periodically jerking a cut from where I placed it to somewhere else and I’d have to redrag it. With little else to screw with, I turned it all off again, this time (unlike yesterday) also turning off the app and logging out. Restart - centers fine. Turn on app, put cardboard back in. 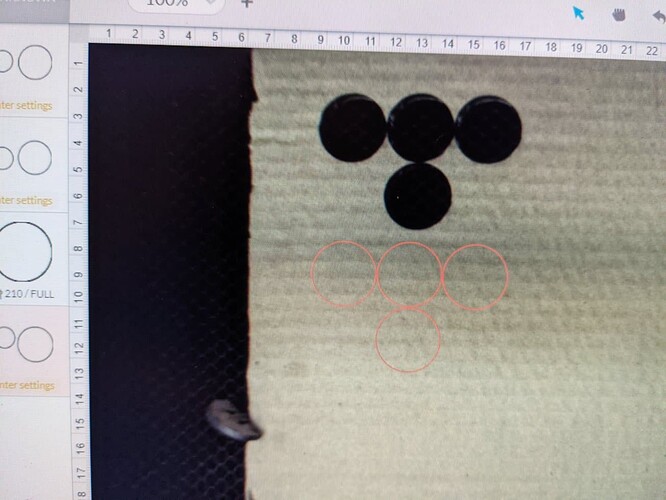 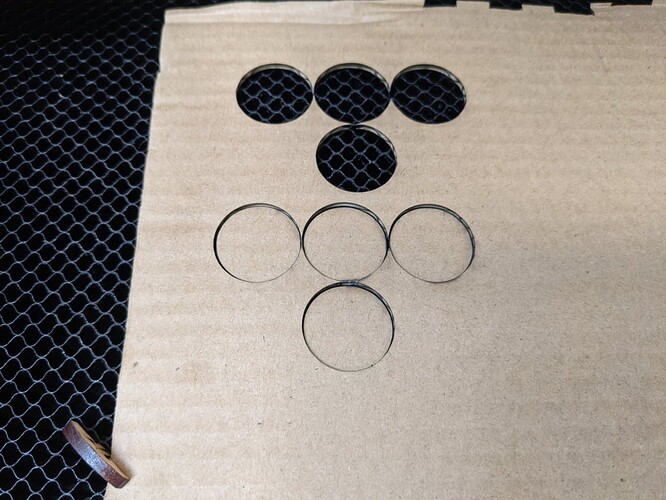 Everything works again. This would suggest it’s something in the software? Which doesn’t make any sense? Though I suppose it is the one thing that’s changed significantly in the… three? years I’ve owned it. But I wish I knew what changed between it working for a bunch of cuts and then suddenly going wonky, since it’s not even a different file right now. I’m just moving the cuts around and cutting again on a new piece of material.

One more experiment…try masking that pink wood with white masking tape. (The targeting laser is red, it might be getting completely incorrect height information on something with a red color tone. Black is also a problem…the head can’t see the red targeting light.)

Anyway, just try a masked run and see what happens.

I’m sorry for the trouble when using the app. I appreciate your very detailed reports and update.

Thank you for your patience while our team looked into this further. We saw on our end that there were some unexpected results in the app when using the arrow keys to arrange artwork, and we’ve made a change on our end. Will you please log back into the app, try again and let me know if moving and printing your artwork is working correctly now?

Repeatable (when it’s happening) on plain cardboard. And when it’s NOT happening, the pink is fine. (just tested) Good suggestion, though, hadn’t thought of that.

Ok! So relogged in, ran 8 consecutive multipart cuts and no problems. So, hopefully, whatever you guys fixed on your end fixed the issue! Will let you know if it re-occurs.

I’m glad it has resolved! I’m going to close this thread. If you run into any other trouble, please start a new topic, or email us at support@glowforge.com. We’re here to help!