Original: When I go to review the Compass Rose Notebook Cover, it’s charging me to $8+ vice being a crowdfunding exclusive. Could it be an error on the catalog, or is there something with my account that I’m not aware of?

On my home project space in the app.glowforge.com it was the oldest project listed. Had to hit “show more” about a dozen times to get to the last page. But I don’t think that everyone gets that reward for free. I know the original backers get it but pretty sure it depends on when you ordered a Glowforge.

I know the original backers get it but pretty sure it depends on when you ordered a Glowforge.

Apparently! and it leaves a bad taste in the mouth…

Everyone who funded before shipping should have been included. Not that $9.00 will kill me but so much was promised three years ago and we all waited so long. Now Amazon ships Prime…

Wouldn’t get all bunched up. The December 2016 update said all the video designs were free to pre-order backers. You ordered before that. It should be in your project list in app.glowforge.com. I am just saying I’m not sure if folks that order now get the free design.

I’d surmise they haven’t pushed it to founders yet. It’s showing up in the catalog for purchase but not on my app homepage.

Shouldn’t be too long. The updates they post can take up to 24 hours to take effect.

Edit: I took awhile to go free in my Catalog and it also showed up in my Home project space under app.glowforge.com. For me it was at the very bottom of the very last page. 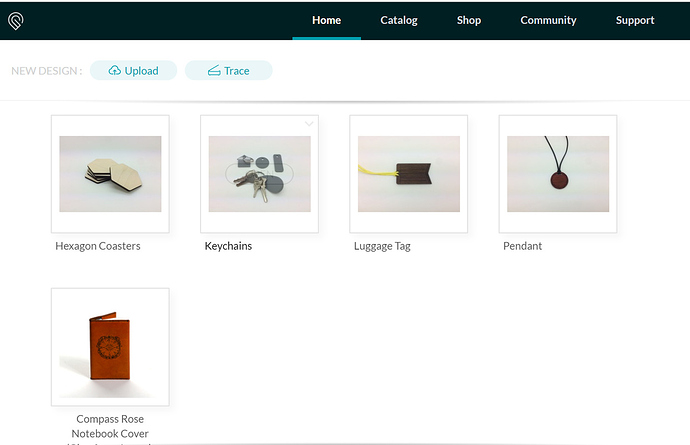 Just showed up in mine, but at the very top.

I didn’t see the Compass Rose Notebook Cover in my files, but it’s in the catalog as ‘purchased’ so clicking on it in the catalog opened the file to print.

Yes, I stand corrected. In the last 15 minutes it went from $8.99 to already purchase for me also.

Wouldn’t get all bunched up.

Not bunched up, but I did order in 12/2016. Like I said “Just Saying” still behind the product and company. I hope for the best, expect the worst. Comes from a 1st Responder “Police” perspective but will carry on…

Weird.
I did not click on it or anything. Just went into the catalog and verified it was in there at no cost.
When I returned to the home page it was sitting on top of my loaded designs.

So now the UI is a mind reader?
Or is the notebook getting kicked so much in the catalog that it is looking for a new home?

Just showed up free. Guess I should have looked at when the post was made. Didn’t allow time for the server to push it. Thanks glowforge team.

You’ll see this one in your accounts soon.

In the past, it’s taken a day or two for these to show up for folks – some earlier, some later.

Just showed up in mine – takes a bit to push it out I think.

Interesting, its still showing pricing but when I click on it in the catalog, I get the “Open my design” .