I recently picked up the latest Stonemaier Games release, Charterstone! 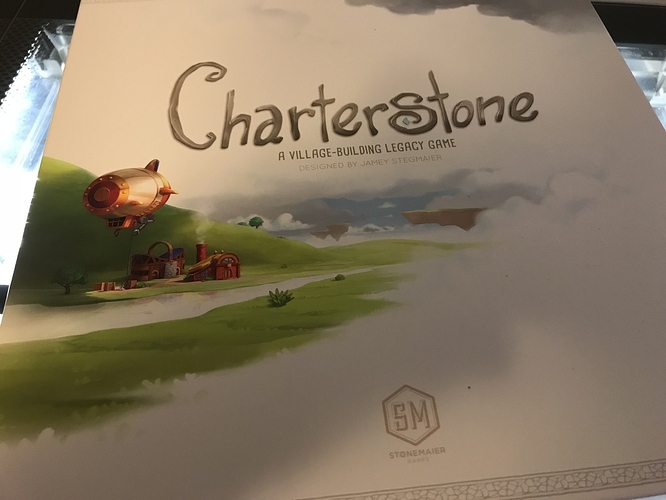 For those unfamiliar, Charterstone is a worker placement, village-building legacy game.

Don’t worry if you have or want Charterstone and haven’t played it yet, nothing I’m showing you or telling you about is a spoiler.

A legacy game is one which runs through scenarios or campaigns as you play and as you progress the game changes permanently. There are others including Pandemic Legacy, Risk Legacy and Seafall just to name a few. The way that the games change over time is by physically altering the components. For example; ripping up cards, adding stickers to boards and so on.

This legacy game is different than those ones however. You see, most legacy games are unplayable once you have completed the campaign. You know the story so there’s no reason to play it again.

Charterstone runs through a campaign, but when you are done you have a complete worker placement game that you can play over and over again. Furthermore, since different players and groups will make different decisions as they go through the game, every copy of Charterstone will be unique!

But that’s not why this is in the Made on a Glowforge category, so I’ll get to that now.

The designers did a really good job of organizing the box. I mean, you can only open certain boxes when told to, so it makes sense to organize it really well. 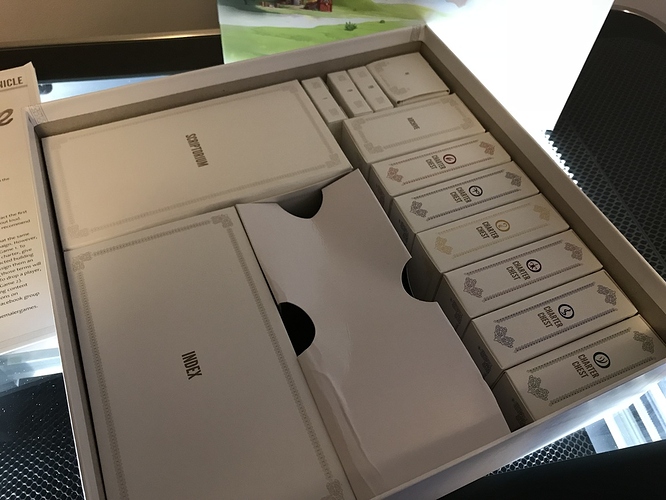 Most of these boxes hold specific things, so there isn’t much reason to try and improve. However, there is one, the Scriptorium, that holds the resources and some of the cards from game to game. 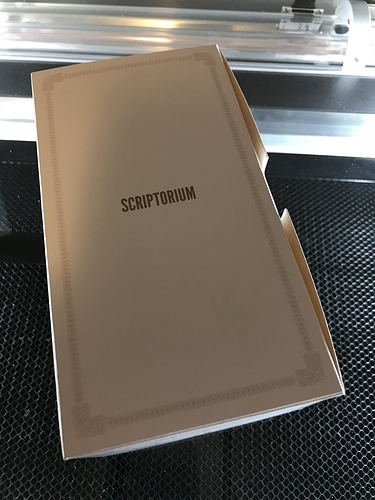 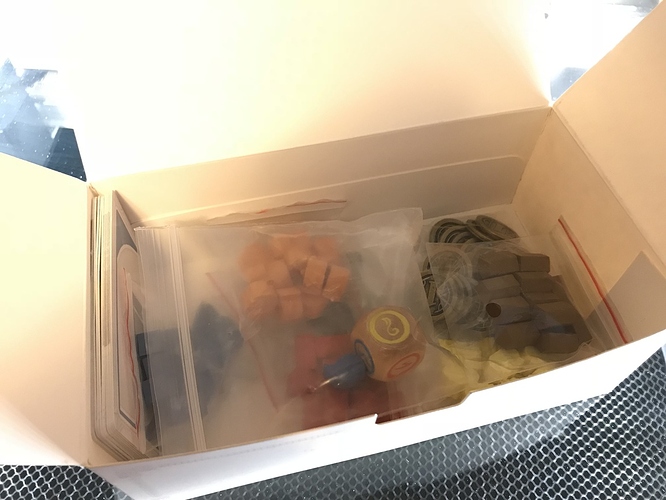 Aside from just being a mess, I found that just having the components in piles on the table during the game was kind of a pain, so I decided to do something about it… 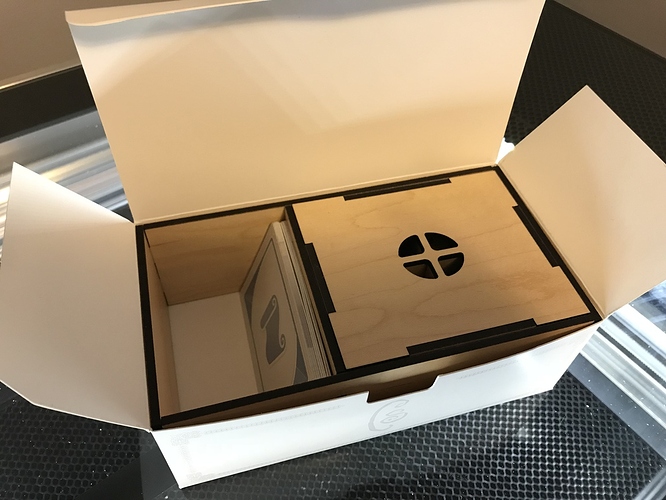 There is a space on the left sized for more and more cards to be added throughout the campaign, and the right side holds all the components with removable trays. 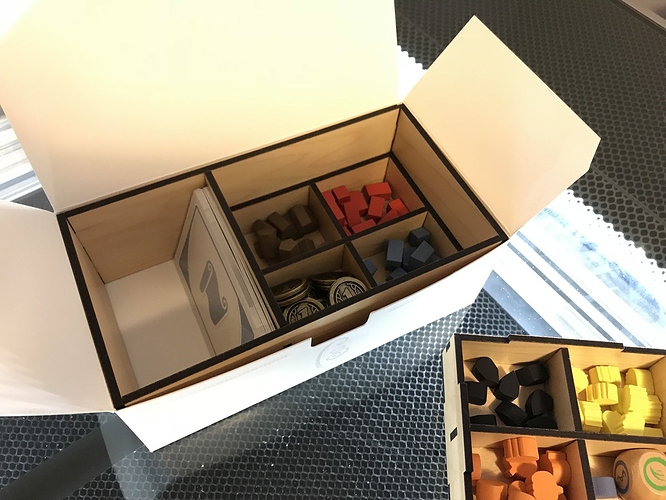 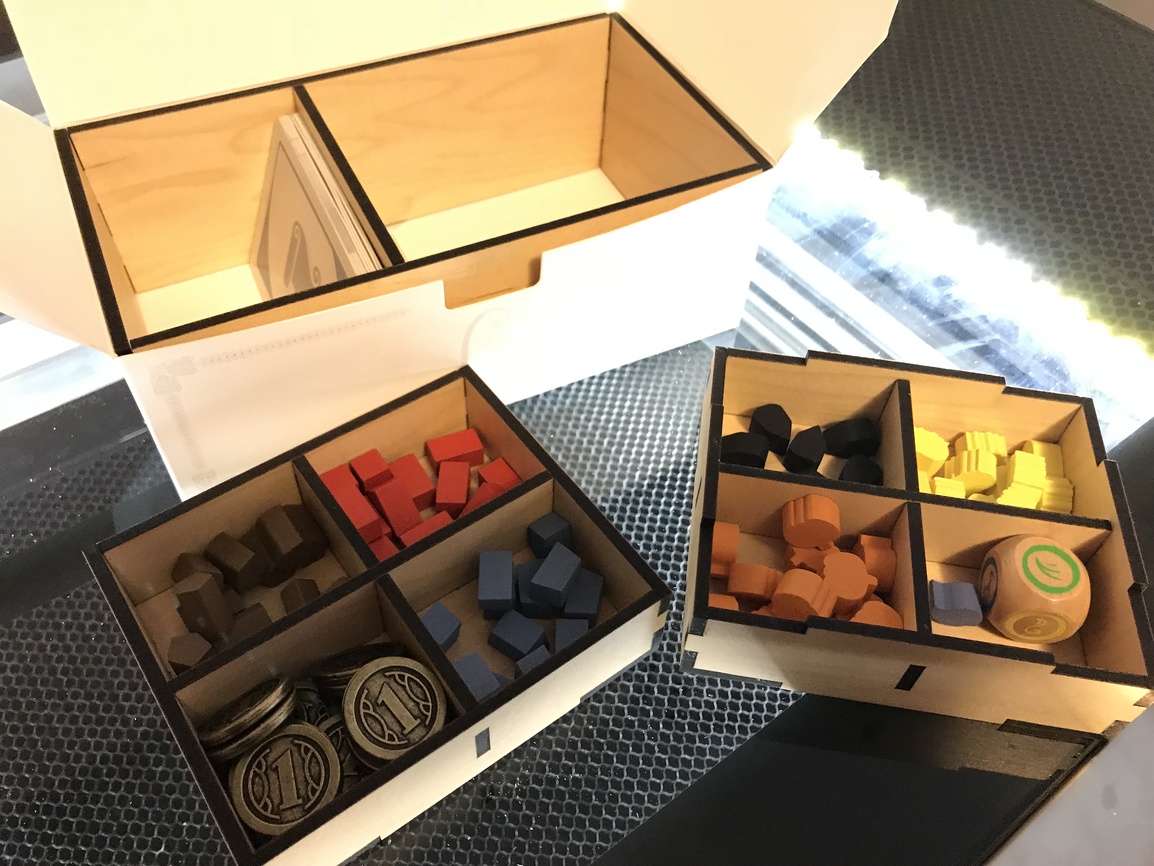 Now we can just place these trays next to the board and I don’t have to open up the many bags and dump them onto the table.

I didn’t bother attempting to account for kerf and just glued it all together, and I’m quite happy with how it came out.

That’s pretty awesome! (And I’d want to make the whole thing out of wood to match!)

How does it play?

We’ve only played the first game so far, and so far it’s awesome. We are playing 2 player. There are rules for solo play, but I haven’t looked at them.

I like the black on the top edges…makes it pop nicely and gives a nice polished finish. Did you just use paint?

No. That’s just the color after it gets lasered.

Wow…it seems jet black. I usually find that laser cuts have a charred brown appearance. Is this black typical of Glowforge cuts?

It’s a dark brown. Maybe the photo with the backlight behind it makes it seem darker than it is.

I may just need to try this game out. I haven’t played many legacy style games. Thanks for the write up and nicely done dividers!

This is my first legacy game as well. I’m really excited to play our way through it… and Stonemaier Games just does an amazing job on… well, both of the games that I have of theirs. (Scythe being the other one).

Making storage for my board game pieces is definitely going to be my starter projects whenever my GF finally arrives. Pieces in a big jumble drives me crazy!

Because of this thread, I acquired this game and we played our first game a couple of nights ago. It was fun! And we’re excited to get together to find out more. It’s neat learning as you play like this. It gives a nice sense of discovery.

I’m glad that you enjoy it. We enjoyed our first game too, but then we got busy, so it’s been a couple of weeks now. It’s been rough having to do “adulting” while games await.

This looks great. How did you design the boxes? Can you share scripts or source files?

I designed them manually in AutoCAD, exported as DXF files and imported into Inkscape to make SVGs.

Ok… still no spoilers, but a few lessons… the Scriptorium organizer didn’t account for additions later in the game… time to expand it and take out the space-filler cardboard that’s in the box!

Also, I didn’t really check sizes, but not all of the coins fit into a single section of my organizer.

With the latest wave of ‘legacy’ and unlockable games i find it useful to check boardgame geek to see what the future storage solution needs to be.

I’ll probably wait until we finish the campaign to re-design the insert… I was mad that I looked on the back of the book and saw the “spoiler” symbolism.