Was getting quite upset with the KVM switch for the WFH and PAH scenario with switching the monitors back and forth between the work laptop and using the home desktop. It drove me crazy how I would flip the switch to allow me to use the keyboard & mouse with the monitors once I changed their settings on all 3…to get over to the other computer and it would jump back to the previous setting. Along with having an older monitor that kept switching to purple in the middle of the day. I was just “so done with that”.

To the rescue! My son bought me a 34" ultra wide curved monitor for my home desktop (and can plug in my new laptop if I want). My home is on the left which I can divide into sections and the right double monitors will be my work. My son gave it to me early which I really appreciate because for 2 weeks I will be on call…I have to check in on work’s computer and check alarms in the dashboard. I will be a lot calmer because of it.

My husband ordered the extra mounts for the screen because my desk is an Ikea butcher block top with a motorized base so I can sit or stand. I don’t have to worry about the screens falling over. He painted the table top when I was in college with Unicorn Spit…I LOVE it.

Now I suppose I should let my husband open his sound bar that came this week…the whole setup in the box was VERY heavy…so I put a bow on it. Oldest already opened his birthday/Christmas present as he had to trade in his Apple watch to get the newer one so he has that now. At this rate, the family will have stockings to open…we’re bad at waiting…we want the receiver to enjoy it ASAP. LOL 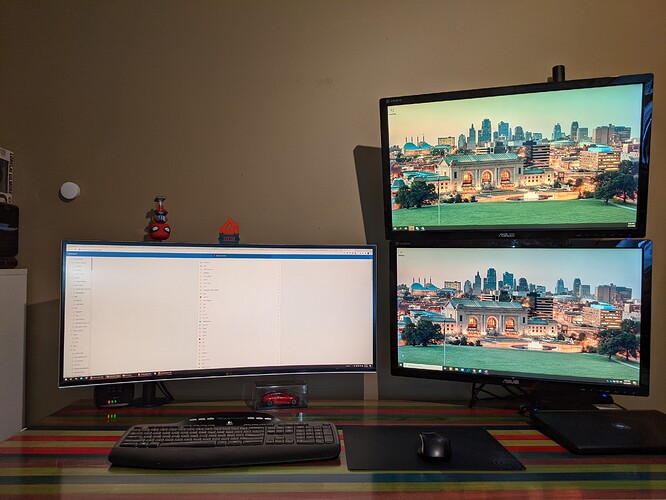 Your screen wallpaper reminds me of Kansas City

First time I ever saw my future husband was in front of Union Station at Maker Faire racing modified power wheels cars. We actually raced against him and the Makerspace — which we all officially met that next week when I went to visit their space and join it immediately.

Before I had even seen who had posted the picture I knew it was you. I couldn’t tell what was on the new screen

Love the setup! Love the picture of Union Station from Liberty Memorial!

I work in the building just north of there, so I know that view very well. Well… I knew it better when I actually went in to work… Been working from home since March (2020). They told us they are not even thinking about us going back until June (2021). After that, they will think about it some more.

(I am very jealous of your setup… that is REALLY nice!)

Thank you! I’m navigationally challenged…which way is north (behind Union Station…oh wait that might be south)?

I’ve been WFH since late March. I was on furlough for 4 months and have been WFH since. They are going to review in January but said most likely they will push it a month or so out from there. I like being at home but I miss the face to face at work. We don’t have cubicles so we can see people across a few rows which is nice. Saves time from getting up and going over just to find out they aren’t there…

Nice thing is work has a multi-level garage so I don’t have to worry about cleaning the snow off the car when we do get it.

No… I am directionally challenged… the building I work in is South of Liberty Memorial.

(That view is to the North.)

Ok was wondering if you were in the old Payless Cashways (shared with other companies I think) building that was built behind Union Station pictured just to the left and slightly taller.

I used to work downtown, was so glad when I moved from all that congestion to out south. Lots faster to get to work once I did that.

i have the onscreen software the splits the monitor, too. really makes working easier.

Yeah, I live out south too. But it’s not faster to get to work, because it is about a 45 minute drive… So, I am saving lots of money (and time!) working from home.

I don’t really watch anything on my monitor…Hubby is going to mount a TV on the wall if we want to watch anything in here…just need to get him motivated (then I will also be able to walk in the room because right now the sewing area is blocked off and I need to sew my great nephew a santa pillowcase and a santa mask and get them in the mail Monday.

My son mentioned it was like a 2 1/2K resolution. LOL He walked into Microcenter and was going to buy one monitor and looked over at this one and said hey that is a much better price and it’s nicer! He mentioned to a sales person that he thought that price was wrong but would gladly take one off their hands. The guy looked it up and said whoops! took the sign off the shelf and said we will sell it to you but the sign is getting reprinted! Thanks for bringing it to our attention. Score!

He mentioned to a sales person that he thought that price was wrong but would gladly take one off their hands. The guy looked it up and said whoops! took the sign off the shelf and said we will sell it to you but the sign is getting reprinted! Thanks for bringing it to our attention. Score!

That is a total SCORE! I haven’t been to Microcenter in to long… I love that place. So many “toys” that I want…

i don’t watch TV on it. it’s all about getting better resolution for design work. i work on that one and, if i have TV going too, that’s on my laptop screen.

when i go to the office occasionally and have two 22" 1080p monitors, everything looks clunky now.

Found out you can order a marble colored 3D filament from them! Don’t carry it in the store. Just got a roll for ourselves and one for a present. BIL put filament on his list and all the colors he wanted for Christmas; makes it easy to shop for. It’s definitely much better than the Fry’s we visited in AZ.

Yeah even my 2 monitors on the right are better than the screens at work. I don’t do design work on them…they are for email, our dashboard, etc. My new one I will but I either do digital scrapbooking (haven’t touched in years) or glowforge type of stuff.

all design all the time for me :), whether work or play.

My son bought me a 34" ultra wide curved monitor for my home desktop (and can plug in my new laptop if I want). My home is on the left which I can divide into sections and the right double monitors will be my work.

Wow! You can now do Inkscape and Gimp and the GFUI all at the same time! I have only(!) two screens that look pretty small after those that I keep the Laptop screen as the “working” screen and put all the windows on the other like so…

This is a much easier way to use any program that allows the tool windows to go outside the working windows as there is real time information happening there as well as the ability to type stuff as commands.

So I’m curious, I like two screens because they seem to me to keep the different bits nicely segregated.

For those who have switched to one big screen, do you feel it is messier than two singles?

Also, do you keep accidentally expanding things to fill the entire screen when you don’t want to?

For those who have switched to one big screen, do you feel it is messier than two singles?

They have the laptop screen as well as the big one! I would certainly use both even with that setup.

I have software that came with the monitor that can segment the screen in different configurations so the big screen is equivalent to several screens.