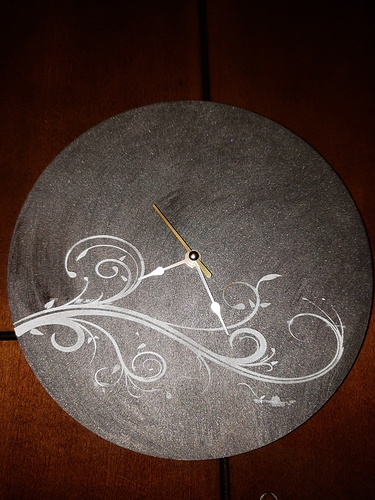 Just trying something out. I took an MDF circle and spray-painted it with Rustoleum Paint+Primer to give it kind of a gun-metal look. I taped it up, and had my GF drill the center hole and engrave the flourish. I left the tape on after cutting and gave the engraved portion a coat of metallic spray paint.

it looks really cool. I initially thought it was a shot of the moon with the lunar mission flight paths highlighted (RIP Alan Bean). Thought it was a timely tribute.

But even with a second look, it’s still a neat clock.

I initially thought it was a shot of the moon

Now there is a fantastic idea for a round deep engrave. Especially if one could find a gray scale elevation map