I was supposed to get my Pro Friday. On Friday, a UPS truck rolled into my driveway, then the driver went into the back of the truck for a few minutes, they the truck left. A little while later, I got a notice that delivery was rescheduled to Monday, today. No reason why was given.

Today, just now, a UPS truck rolled into my driveway. The driver exited the truck and did something out of view, behind the truck, then got back in the truck and left. I am expecting another delay message any minute now.

Neither time did the driver walk up to the house.

Maybe there is a leaky box in the back that sounds like broken glass, and the drivers are punting my delivery to the next guy, heh.

(My security system lets me know when someone enters the driveway, and then I watched a security camera replay while I was out doing errands. I decided it was safe to go out for a bit since my delivery window is “end of day” but I am about to return home…)

Can you use the online system at UPS to tell them that you will pick it up?

I’m betting that it’s a two-person lift job, and there’s only one person in the truck.

There is definitely only one person in the truck, so you might be right!

Twitter and Facebook have their benefits, but I don’t use either and I’m
not going to start for this. I’ll get it eventually, even if I have to pick
it up at the depot. It’s been a couple of years, a couple of days more
ain’t no big deal!

Either that or set up camp at the end of your driveway with signs that say I will help you lift it out of the truck, and have a carrier to put it on

Or they don’t have a magliner on their truck maybe? It’s been nuts seeing how many more private contractors are delivering amazon shipments despite more UPS trucks than I’ve ever seen this time of year. UPS could simply be at the edge of their deployable fleet of gear, trucks, and drivers.

I’d plan to ambush them if you can’t call and request a pickup. I’ve been slightly worried about not being home when it is supposed to be dropped off, as every day that thing is offloaded and loaded, and driven around town it increases the chance of it taking a bad blow and being one of those forum tragedy posts. If you have a magliner/cart of your own, you could always leave it in your driveway as bait.

Ambush is my next plan, assuming it does not show up today… I still haven’t gotten an official reschedule message, but I do expect one to arrive.

Fortunately I am home this week. Could be worse.

What day in the campaign did you order yours? I imagine you might be west coast as you still have trucks on the move there?

I am on the west coast, yeah. UPS delivers as late as 8 PM around here I think. But I will honestly be shocked if it shows up today, I bet the driver passed the buck.

After my second one didn’t show up for two days as it should have, I grabbed the phone # right from ups mychoice and called about it and had a call back from someone at the hub roughly 10 minutes later to explain why.

If I wasn’t already gonna be home, a couple of days of “YOU MUST BE HERE TO SIGN” with no truck showing up would be super irritating! “You had ONE JOB, UPS!”

Still no official delay email from UPS though… Still a couple hours left in the delivery day… Maybe it will all work out!

Holy smokes, it arrived. The UPS driver said that he did come by earlier today but “it wasn’t on the truck.” So I guess my earlier drive-by was some office snafu.

The box is barely holding together and 2 handles are MIA. This box has the thousand-yard stare, man… But the machine seems to be in one piece.

Thanks for indulging my neuroticism! 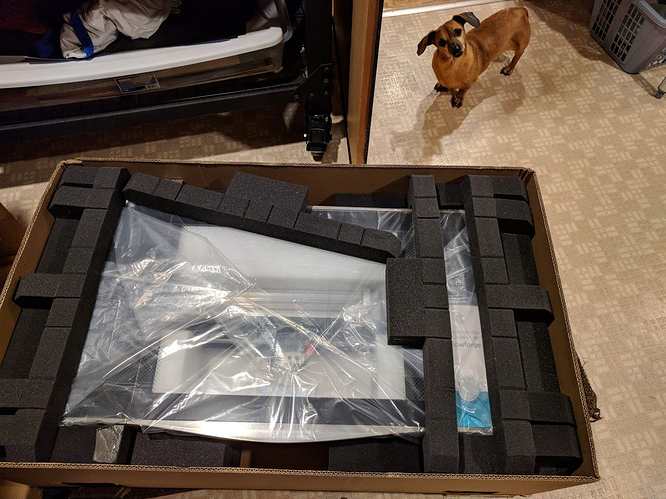 Your pup is certainly intrigued at the new arrival as well.

Hey congratulations indeed! The cardboard gods have smiled upon your box. I asked about your purchase date because I ordered a pro on day 23, still haven’t heard from UPS about it shipping, but I’ve heard the west coast is getting them much sooner, probably because of bulk ground freight being much slower than regional UPS or something. Maybe they ship larger loads of them to hubs closer to end destinations because it’s less expensive than UPS the whole way. That would make sense if mine (and those of other similarly ordered east coast glowfolk) didn’t get UPS tracking as they might not be in the system yet even though they could be on a vehicle covering ground. There should be another forum thread for trying to deduce and reverse engineer a model for the GF logistics. The guesses would at least be entertaining and it would give those of us playing kid-at-advent-who-asked-Santa-for-a-nintendo64 something to do in the meantime besides watch the tutorial vids. Have fun tomorrow (or tonight) on your first burns!

My wife and all my friends think i’m crazy because i’ve Been saying some variation of, “when the laser comes, I’ll ____________,” for two years and they think I’ve cried wolf too often. My wife stopped accepting “yeah, I know you like it, but when the laser comes I’ll make you one for free out of better stuff” over a year ago.

Seriously, the forums are therapy.

Seriously, the forums are therapy.