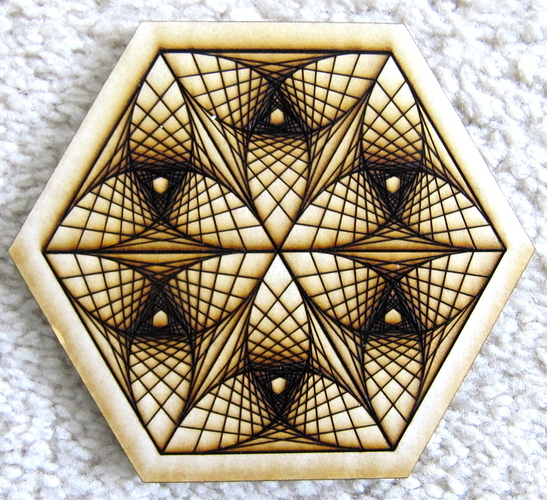 This sort of design is good for scoring too, but be careful of how many lines might intersect in one spot, it might just burn straight through

Very nice! I have a few like this ready to try, but need to weed out the overlaps, which can be time consuming.

I have not yet done overlap weeding. Mathematica was used to make the original design and the resulting graphic had overlaps. Hand crafting an original is also possible but that’s probably more work than just weeding the existing design.
Or, hey! Treat the deeper scores as a Feature.

If I’m understanding what you’re saying, each line is actually a separate vector rectangle. You can use Inkscape to make it one solid shape… Just select all the elements of the SVG that you want joined, ensure that they are all “paths” (not rectangles or circles) by choosing Path->object to path, then do Path->union. They should all flatten right down into a single path object.

The main benefit there is that it should engrave a lot more quickly, it wont need to traverse up and down over and over.

Actually, if it s all one line, it would be even faster to do this as a score.

More Pilot Error on my part this time using Inkscape. Snapping after rotating supposedly equilateral triangles seemed to fail on a couple of the 6 master triangle nests. So Union fixed the real overlaps, but left those slightly out of register alone.

I tried! Must try some more.

I think that’s actually what was produced by my flailing .
My goal was eventually to have an engrave with increasingly dark engraved triangles as triangles got smaller to give a hole/depth effect. I’m stuck on converting GF-power setting values to engraving depths since my 4X4 square matrix designed to get the depth measurements keeps failing to upload with some “clip-path” error flagged by GF. More Inkscape problems …

This is something similar that I’ve done for coasters (seems to be a hit). I’ve meant to put it in the Free Laser designs but forgot since it had been quite a while ago. I’ll try and get that remedied tonight!

Been trying a multi-triangle mock-up on Inkscape. Path->Combine does the magic of leaving one line (for a score) where two lines were on top of each other. Using Union sometimes eliminated the doubled line altogether.