Had my pro for a couple months or so. I mostly do cuts, some fairly short engraves almost entirely on hardwood (maple, walnut, cherry mostly), a little baltic birch ply. I use it regularly, but not for extended periods. I’m probably still below 20 hours on it.

The compact filter has been great for that time. Running at the “New” setting. It’s been great!

Two days ago, in the middle of a run, it went from running great to pulling almost no air. Checking all the pieces it looks like the filter’s full (all the fans still pull expected amounts of air, except when you put in the filter).

Again, went from great at lowest setting to useless on the highest setting in one short run. Is this an anomaly? Not even 20 hours of low resin/glue use and in the space of 10 minutes its a brick? That seems awfully short for a $250 piece.

Twenty to thirty hours of actual Cutting/Engraving time seems about normal for filters this size with woods …you might be able to use one of these pre-filters in front of the filter to catch larger particles, but you’ll need to keep an eye on it and change it out more frequently. 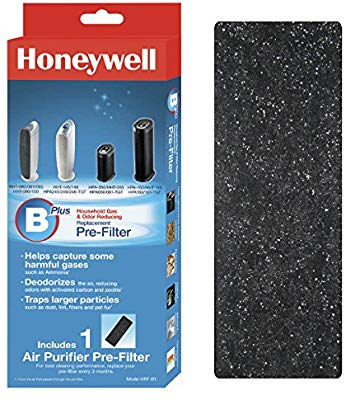 It would be super helpful if I had a record of runs or a “time laser has been running” in the machine/cloud to measure from. I’m really not sure if I’m closer to like 10 hours or 20.

Any idea how much the prefilter would extend the life? Trying to evaluate whether I continue to use this (which I’ve already spent 1k to get) or look at other solutions.

Any idea how much the prefilter would extend the life?

When I was testing it, without a pre-filter, I actually kept records of every minute spent cutting, engraving, and on which materials I was testing. I killed the first filter in…hold on…got to go look…

…exactly 1704 minutes or 28 hours. Of that 1536 minutes were spent engraving, 168 minutes cutting. On both acrylics and plywoods (some hardwood). I did avoid draftboard, since that will clog up a filter faster.

One of the other testers who ran his filter with the pre-filter shown above lasted a good two months longer than I did with the first filter, so depending on how much he was using it, it might extend the life significantly. I’d definitely recommend trying one. (And I did get one to use on the filter, I just switched to venting outdoors since I have that ability.)

I think what surprised me most was that it went from doing awesome to nothing in one cut. Did you notice that, or was there a more even drop-off?

No, mine also filled up during a long engrave, and when it did, I had to kill the print. (It doesn’t take long for it to go from " I can smell it" to “Uh-oh”. If you start to smell a little something while it’s working, you can dial it up, but place the order for the next filter…it might not be long.)

Oh, dangit I forgot…one thing to remember now…we can pause a long print if it starts to get too smelly, switch out the filter and resume the print afterwards, as long as we have a spare filter on hand. So I intend to order a spare for that reason. (I haven’t so far because I’ve been mainly venting outside lately, but it’s a good idea.) Didn’t have that option when I tested it, but we do now.

Yeah. It’s the price point that’s a challenge for me. 250 every 2 months is a pretty big addon to the cost of things. And husbeast says “no” to venting outside until we move so as not to risk smoke stains on the house/garden.

Oh! No smoke stains on the exterior…you can put one of those little flap things on it that direct the exhaust out away from the house.

(BTW, I vented through a window right at a grassy plant about two feet away for over a year. It grew so much we had to take it out. They actually like the extra CO2. Who knew?)

Useful to know! Especially since the replacement we were looking at the unit itself is 3k.

Yeah, the larger ones can handle a much larger capacity, and they usually come with a prefilter of some kind, but the up front cost will tighten your throat. The best option is still to vent outdoors if you can. Least trouble overall.

I saw your set up in your review, what kind of vent is that in teh window? I like that it doesn’t wipe out a third of your window.

We have the kind of windows that have a grid on them, so you can easily remove one of those little panes of glass and replace it with a sheet of acrylic. Just cut a hole for the dryer vent (that’s a standard dryer vent setup available at any Home Depot) in the acrylic and use clear caulk to seal it. You can even use the Glowforge to cut the hole in the acrylic.

Husband helped me set up a vent to outdoors. 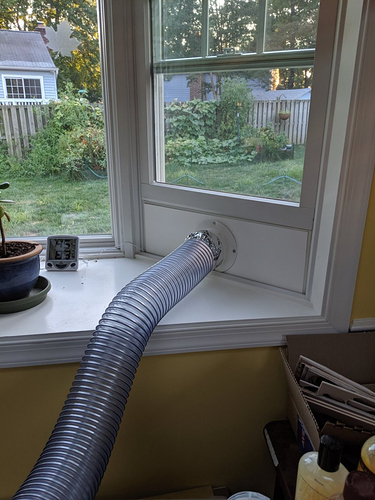 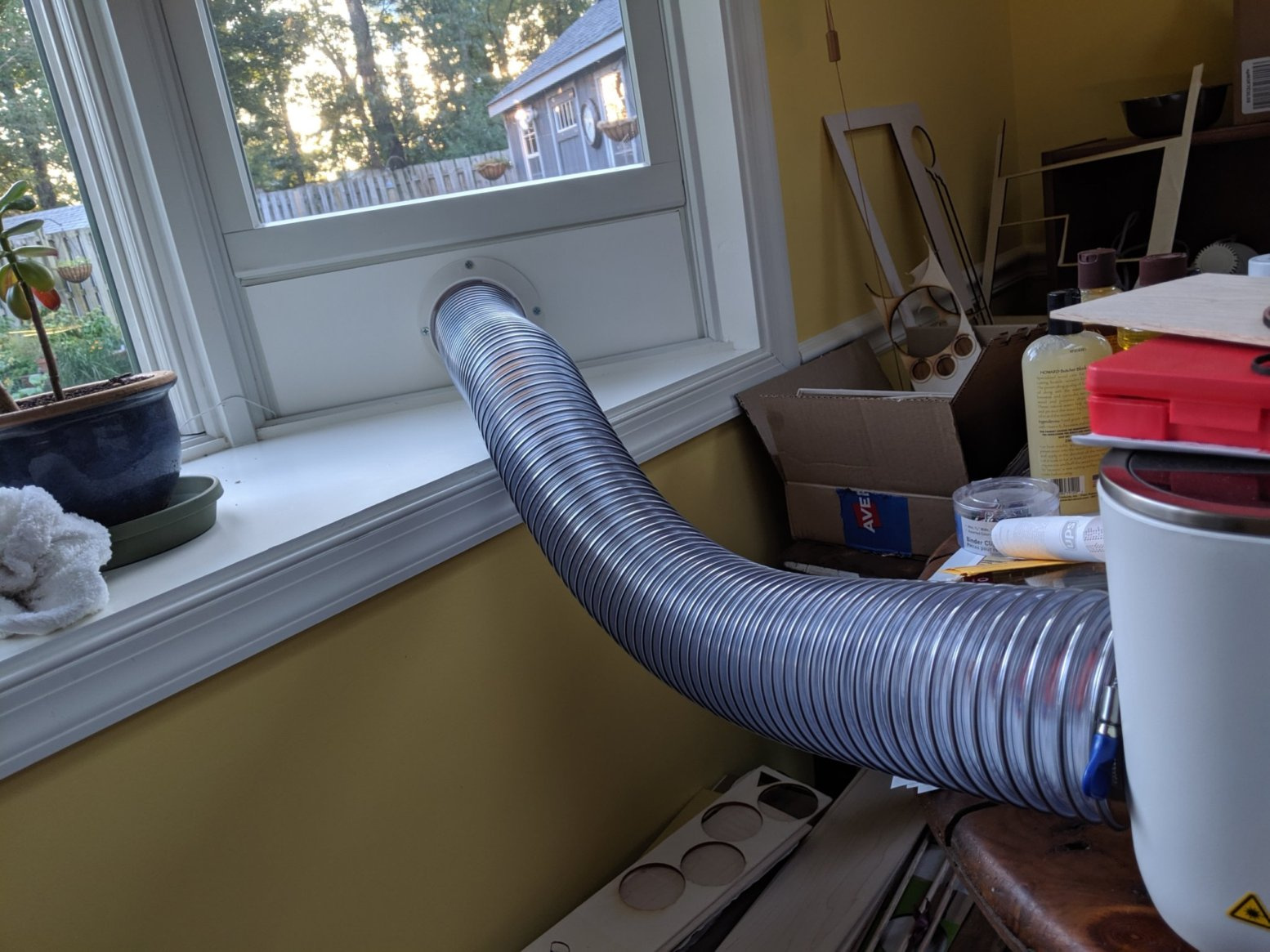 not to risk smoke stains on the house/garden.

Mine would have as big a stain as one might expect but after a year it would be barely visible, A quick wipe with hand sanitizer would easily make it vanish,

Yeah, that ought to be fine.

Thank you for the help @Jules!

@brewergnome Thanks so much for your patience. What you’ve described sounds like a full filter cartridge.

You should have just received an email from us with more information. Since I’ve followed up there, I’m going to close this thread.