I love the compact filter I just got! I am in a school so smell is a no-go. I was cutting acrylic for ball mazes for students and it was a nightmare. 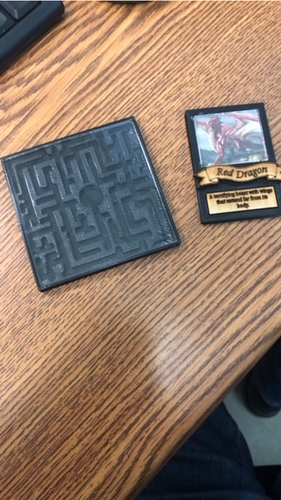 However the compact filter is awesome. No smell. its on wheels, quiet. It sits right next my unit. Only pet peeve is having manual control, but its worth it. 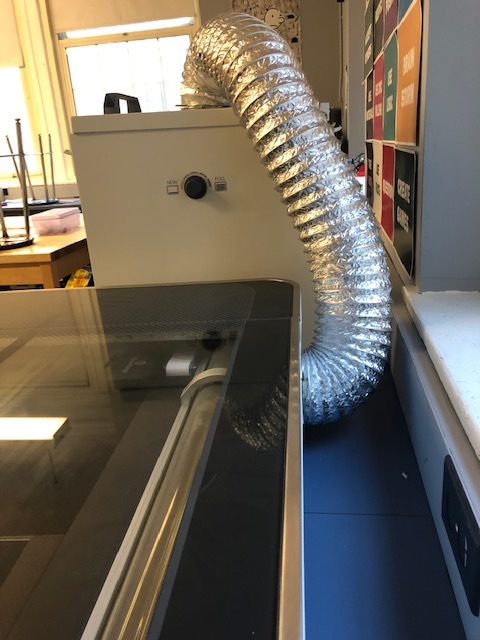 Does anyone know if im supposed to let it run for a few with the lid close after the cut to get all the smell?

Yes, the Compact Filter is amazing!! I’m glad it is working for you.

I tend to leave mine on until the light turns off of the GF after my cut is done. It’s ok if you leave it on longer, but I wouldn’t turn it off sooner than that.

Might even let it run while removing cut items so trapped smoke from underneath can get sucked up.

Amen! I asked that the fan could continue even after you open the top even at a lower level to suck that residual smoke (during the PRU period) and supposedly that went into the hopper (where ideas go to sit)

Yeah, you absolutely can do this with the Compact Filter. Let it run while the lid is up…no problem.

Hi - I received mine over the weekend, to be honest I was not expecting it to be so large it’s a beefy machine. It running really well and no awefill smell in the house. I run it using a Bluetooth remote triggered by a small remote you pick these up all over.

My experience is that if the filter is running even all the time especially with the lid open some that other dust and smells will be removed from the room as well, and the exhaust fan is exercised and it is my experience less likely to clog as it is not being run only when there is tons of smoke choking it.

My system is a bit different as I have a Vivosun assist that is rarely off putting interior air outside , and a blue monster that is on a lot cleaning out the house no matter what the source of dust or smells.

What is the life expectancy of the filter? Anyone know? (i.e. how often do you have to replace)

What is the life expectancy of the filter?

The answer is quite variable depending on what you are doing with it. Lots of Leather and Acrylic will eat up the abilities of the Carbon filter side, while lots of MDF, oak, poplar etc will fill the particle filter, and if you are doing tile and stone they could last “forever”.

I’ve got about 10 hours on mine so far with engraving and cutting. Probably 75% of my cutting has been on hardwoods, but the other 25% is a mix of leather, acrylic, and proof grade plywood. The only thing I haven’t cut on it is the “Draftboard” because it causes the filter to fill up roughly 10x the normal rate.

After 10 hours or so I am still on a “high 2” setting right now. I have also been using a “pre-filter” that is helping collect some of the bigger particles, which I believe is helping me keep my filter from filling up as fast. But I haven’t been running the pre-filter the entire time, maybe only the last 3-4 hours of using it.

Based on my testing, and the other folks that have done some testing on the forum, I would guesstimate that a filter is good anywhere from 20 hours (if you try to fill it up and only cut proofgrade draftboard or mdf) to 200 hours, if you are cutting mostly hardwood, tile, stone, etc. or things that generally don’t have a lot of particles that fly around. Adding a pre-filter is kind of “at your own risk” but may extend the life a tad.

For general/mixed use, you might be able to assume the filter is going to last around 100 hours of cutting/engraving time as long as you aren’t doing draft board. If you cut/engrave 8 hours a week, the filter would last you roughly 12 weeks or so, or about 3 months. 8 hours is actually QUITE a bit of cutting though, and I’d wager to say most people probably aren’t doing that unless they are using it semi-professionally. I was doing about 8-12 hours a week in Nov/Dec when I was getting ready for a craft show, but right now I’m only using it for occasional projects. (Still working on getting my Etsy shop advertised… hoping it will pick up again!

Please take all these estimates with a huge grain of salt! As I still have yet to fill up my filter… But I think they are realistic based on my own testing/use.

A grain a salt goes a long way…thanks for the info!
Just making sure, this is the filter glowforge recommended instead of their own filter correct?

This is the alternative filter that Glowforge is offering. (TechyG is one of the early testers.)

This is the filter they offered via a lottery the rules of which are unknown. I never got a confirmation that they received my submission and I certainly have never received anything else.

Yes that is correct. It’s for the compact filter not the one that they are still making.

Just for information. I submitted the request for the compact filter a few weeks ago, and received the filter last week. I never received a “confirmation” of my request, but did not expect one. Why would I? I did received an email a few days before delivery so that I knew it was on the way. Also, knowing the “lottery rules” would not make any difference, that is not an issue.

Just for information. I submitted the request for the compact filter a few weeks ago and have never received anything at all. I never received a “confirmation” of my request, and often wonder whether they received it at all so I can ensure I’m in the queue. That’s why I would have hoped for a confirmation of the receipt of the form. I have not received an email at all containing any information. Knowing the “lottery rules” would make a huge difference as I read all of the posts about how people are receiving the item I cannot even confirm I’m in line for. This is an issue.