My 9 year old daughter is a big Katy Perry fan, and fortunately my wife is a good enough sport to go along with her on this… and I get to just craft the gift giving! She’s going with a good friend of hers (combination birthday and Xmas) so I made all of them a set of concert tickets (since everything is digital) to “open”.

I spent ages on getting Katy Perry just right so it looks like the official imagery, whatchy’all think?

Engraved on maple ply, traced the image in Inkscape then a lot of manual cleanup and editing. Font is “Function Pro” for her name, Katy Perry, and then just traced the font for “WITNESS”.

Lovely idea for a ticket gift!

Several years ago, I don’t remember which concert it was, but I brought my “print at home” tickets engraved on a plank of wood.

Security at the door was not amused.

Really cool! My best friend’s wife and his sister just went to this concert a week or so ago. I thought that maybe you had printed these on paper (because I’ve been engraving on paper lately so I’m a little close minded ATM) but the wood came out really awesome! I bet these would be cool printed on some cardstock and then framed, or even better, on some veneer and put on a black cardstock background and then framed! Sorry, I wasn’t joking about being obsessed with engraved paper haha

In any case, seriously cool, and I’m sure your daughter and her friends are going to go bananas over these!

What a thoughtful idea for a digital gift!

So much more fun than just a print out! Great job!

What a great papa. Looks awesome!!

Security at the door was not amused.

You seriously should! The black cardstock I have has an amazing copper/brown color when engraved, and I can’t believe how smooth the engraving is when done. 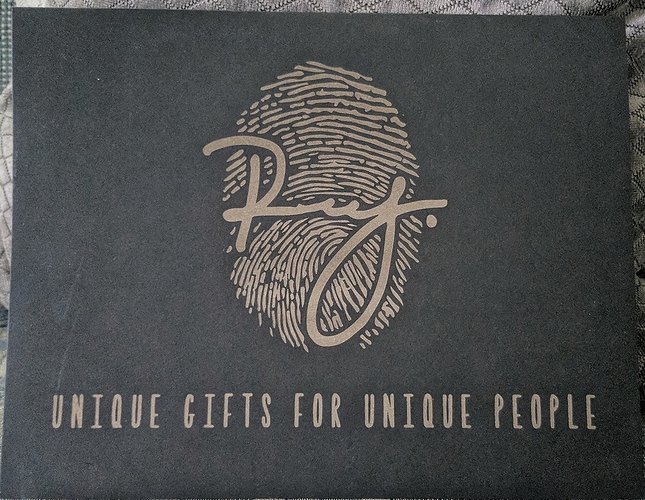 That is seriously cool. Do you have a link to the cardstock you are using?

I bought it in person at Walmart, but I found it online here: https://www.walmart.com/ip/Astrobrights-Laser-Inkjet-Print-Card-Stock/41061977

I don’t believe I paid what it’s listed, but I also think I only got 25 sheets or so. I used 1000 speed and 5 power for this, and it came out pretty great. I have gone up to 15 power without issue, but I figured the less power I used the better in case it stays in one spot longer than I expect it to. It’s not the thickest paper either at only .01 thickness, so I glued two pieces together and it’s a much better result!