If you don’t want to hear about covid-19, please mute this thread and walk away. It’s ok not to read a topic that will make you actively unhappy. This is a dark time, and it is 100% ok to disengage now and then because your mental health is at stake. Be well and stay as informed as you can be within your limits.

So, to the good stuff.

People talk a lot about contact tracing, which to many of us probably sounds like a euphemism for BIG BROTHER IS WATCHING. It doesn’t have to be, here’s a cool comic about how it can be done without sacrificing privacy. 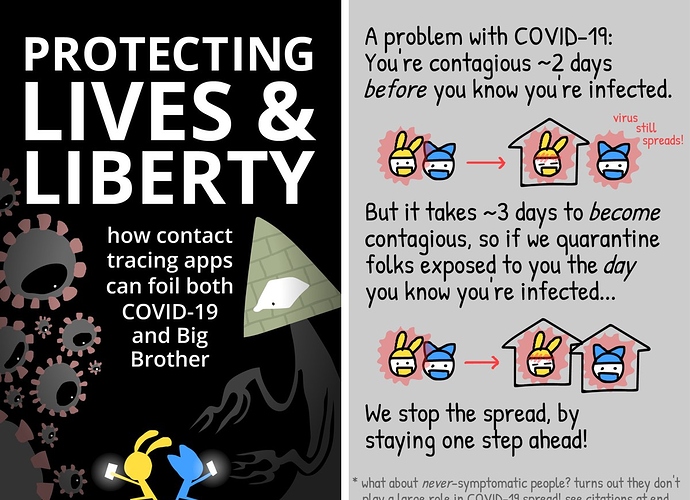 As the update at the end of the linked article notes, Apple and Google have announced they are cooperating to produce a cross-platform contact tracing app. I really hope they can put aside their competitive and other differences and come up with something workable. An app that facilitates contact tracing while protecting privacy (in other words, one that people actually feel is safe to use) will be a big step towards being able to loosen current restrictions. It’s only part of the solution though - testing has to be readily accessible, and people have to follow whatever new procedures are set out.

The Canadian Prime Minister and others are trying to prepare people for what comes next by warning that the new “normal” after the first wave of infection subsides will not be the same as the old “normal” before the novel corona virus.

Interesting concept. I feel better about contract tracing after reading it. It leaves me with some worries though. (leaving aside the big brother worries for the moment)

The big question for me is that bluetooth range is 10 meters or so. 10 meters is is much greater than the range necessary for safe social distancing (2 meters). I live on a corner. I am typing this from my office which is less than 10 meters from a sidewalk intersection where roughly 30 people walk past per hour. A good portion of them will be within BT range long enough to send a gibberish message (or get one from me) . So a ??% chance of getting a gipperish blast from each of them which works out to ?? per hour and ??? per day ( numbers depend on how often the gibberish happens) . Within 14 days, I have ??? gibberish messages and only 6 of them need to be covid-19 for me to get the dread message to isolate. An yet, in reality, I am not at risk of infection from anyone who shared those messages.

It would not take long for me to get the dread message. After that, my phone becomes a beacon of false alarms for some % of those who walk past. It only takes a few of them to walk past often enough for their phones to also become beacons of false alarm. Soon, any trip around the block becomes a sure way to get the dread message. An yet none of us may actually be infected.

This false alarm potential due to bluetooth range when applied to the real world (vs me in my office) seems likely to cause a high number of false alarms. Just sitting at a stop light or riding public transit, or practicing what is currently considered safe distancing provides have plenty of plenty to get some number of gibberish blasts. If this happens often enough, it amounts to the same thing as asking everyone to just isolate and naught it accomplished. People in urban settings where isolation would be most beneficial will have the most false positives from the range issue. Unless they can fix this issue, this is doomed to fail.

Also, it may give a false sense of security. You become contagious through some means that is not caught by this method (someone not playing along or by not washing your hands after touching something with the virus on it). Thus, you do not get a message telling you to isolate. You fail to social distance thinking everything is fine when you have actually become a vector and are emboldened by the lack of a message.

It also counts on people becoming symptomatic and on symptomatic people reporting to the system. Some with mild symptoms (i.e. not seeking help) may avoid reporting as they want to avoid the scarlet letter of plague carrier being attached to them. (the same sort of people who hide zombie bites).

Thanks for this conversation. It does seem that we need to leverage technology to stop the spread. Not sure how this can work with privacy values we have in the US, but this is a good start. I like efforts that can be cooperative rather than co-optive.

The virus isn’t going to go away on its own without our learning how to track it better and limit spreading. The network is there. Not sure if the testing capacity is there yet. But how do you really avoid the public knowledge of those who have tested postive? It seems so simple to have a map of the location of people who test positive. But wow. I know you are all able to get beyond some of these initial questions and I appreciate it. I get stumped from the outset because public knowledge of an infection has great potential for harm. But some solution has to manage that.

@mark14, I think the false alarm bit is taken into account by the whole blocked off hours feature, yeah?

As for 30 feet, the whole six feet thing is a baseline and doesnt take a lot of variables into account. My guidance is “if you don’t have to yell you are too close”, so 30 feet seems ok to me. 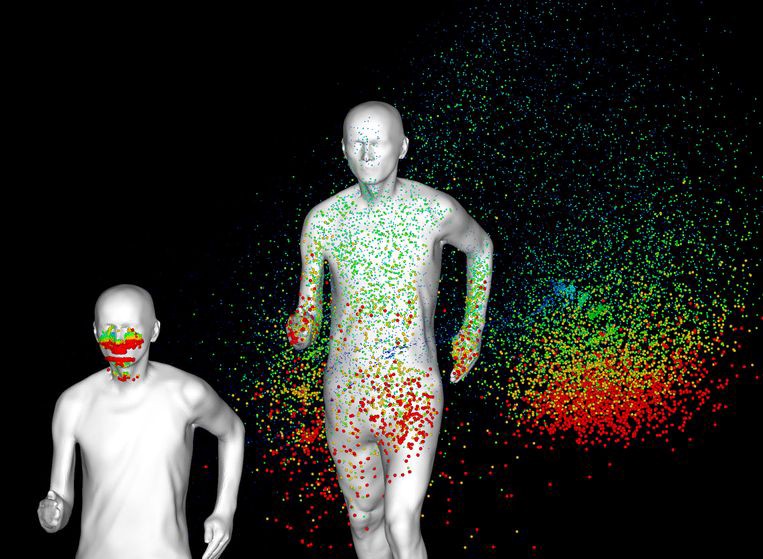 Belgian-Dutch Study: Why in times of COVID-19 you can not walk/run/bike close...

What is a safe distance when running, biking and walking during COVID-19 times? It is further than the typical 1–2 meter as prescribed in…

That might help. if people could remember to turn it off and back on as needed , or in my case, figure out some IFFT way to manage it automatically. Seems less likely to help out in the real world where knowing when to exclude vs include could be very dynamic. Unless the app can find a way to distinguish between 4 meters and 10 meters ( doubling the distance per your comment) i do not have high hopes.

Unless the app can find a way to distinguish between 4 meters and 10 meters ( doubling the distance per your comment) i do not have high hopes.

Why not signal strength? The strength has to drop off predictably with distance. Ignore all gibberish pings with a signal strength less than some value that represents 6ft or intervening structure like building walls.

I would say it’s way better to catch more than less, given the stakes. In theory in this future testing will be quick easy and free. You get a ping, you go get a test, boom. I’d want to know.

i hope it goes like that. I fear that it is a very short path to people/ stores/ authorities demanding to see your app status. Thus mandating use, and putting a burden on people without compatible phones. Such would turn a false positive into a very bad experience. With testing you could prove you were clean (how many days will they ask you to wait?) and then they will need a way to scrub the system to back out the false positive and all of it’s echos without giving up privacy. If there is no means to prune the data tree to remove false positives, they could quickly make the system useless in many areas .

I am not sure that current hardware can distinguish between a strong bluetooth signal or a weak one or if that would be a good idea given how well meat (people) attenuates the signal ( making the signal of the person on the opposite side of you from your phone have a much weaker signal even if very close)… At full strength, a 10 meter range create an area 10 times the size the area needed to be safe from contamination (if 3 meters is safe) . That seems like a false positive generator that will be hard to tame.