Acrylic custom mural I made for one of our large capital campaign donors (can you guess who it was? LOL) for our hospital’s new patient care addition.

The acrylic pieces were cut on the Glowforge and combined using acrylic welding techniques and displayed/enclosed between two full sheets of acrylic for infection control purposes. Red vinyl to cover attachment hardware.

It’s by NO means perfect (I hate it more and more I look at it) but for my first piece, i don’t think it’s too shabby.

I will remake it once I have more experience under my belt, but everyone seemed happy with it. 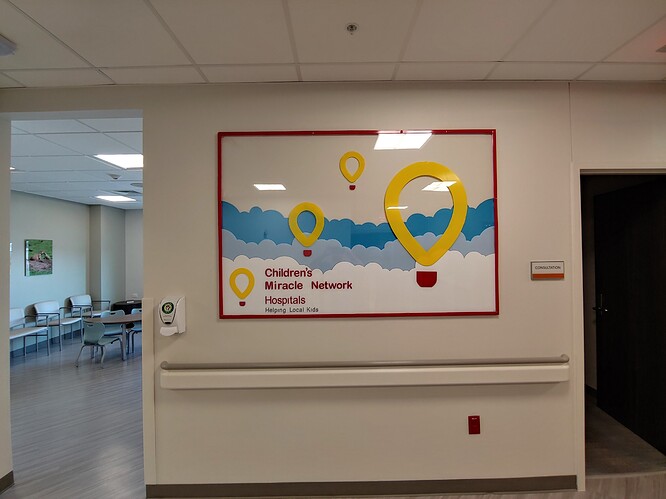 I think it looks great!!!

Welcome to the forum.
Craftsmen are often the worst critics because they see the flaws when everyone else sees the overall result. I think this looks terrific.

Isn’t that the truth! I know every imperfection. The techniques are new to me, so I just need more time and experience. Then they won’t drive me as crazy.

Could it have been the "Children’s Miracle Network"?

(Looks perfect to me.)

You did a fantastic job with this!

I really like it. Very colorful and professional looking.

As they should be - that’s lovely!

Yes you will make things you like better the more experience you get, but that doesn’t distract from the art you made here

That’s amazing! If you don’t mind me asking, are the acrylic pieces (like for the balloon) layered or stacked? I would love to try and make something for my preschool I work at. You did amazing on it !

Especially for a first project! If you redo it, and have the budget, maybe make the balloons with different stripes, either vertically or horizontally. or maybe in shapes of animals and other things, like the big balloon festival in Mew Mexico. Kids would love it. Just a suggestion.

Not at all. This was my process:

The entire piece consists of six layers of 1/8" acrylic sheeting (including the front and back clear full sheets) making it 3/4" thick in total. It is 4’ x 6’ after cutting down the full sheets which were originally 4’ x 8’.

It consists of (back to front):

I wanted to show that the piece has depth, so I supported the balloons that overlap the layers behind the layer they sit on with small clear acrylic spacers that are in hidden locations, and the front acrylic piece with spacers to match the 3/4" dimension. The red vinyl finish not only covered the hardware used to attach the piece to the wall, but the spacers that keep the front full acrylic sheet from collapsing into a layer behind where I wanted it to sit.

The small balloons and typeface were able to be cut from single pieces of acrylic. The large balloon was too big to cut from a single piece, so I designed it in two pieces with dovetail attachment points, cut them using the bypass, and welded them together. This was the only piece I used using the bypass (I’m still not wholly comfortable using it yet.)

To cut down on the weight of the piece, the white translucent cloud layer and the blue transparent cloud layer have cut-outs hidden in the 3 supporting pieces below the layer above it. This allowed them to sit on something for attachment and alignment, but reduced the overall weight considerably. This ended up being a wise decision because the piece was a beast during installation.

I assembled the entire piece starting with the back layer, and then welded each layer on top, careful to sand/polish/clean each weld point before moving on to the next layer. Before adding the top layer, I added the spacer points around the outside edge to support it. I then finished the piece by welding acrylic strips to the outside edge. This provided additional support and enclosed the piece to keep out dust and dirt, which is really important in a clinical/hospital setting.

After letting the welds cure to full strength, the piece was installed and I followed up afterwards by trimming it with the red vinyl.

I hope this helps. Let me know if there is anything else you would like to know.

I would love that.

I designed this particular piece to match the clients logo and to play off a piece of their marketing material, but if I have the chance to design a completely original piece for a daycare center or child-specific business, I would absolutely have a lot more fun with it.

I had the opportunity to experience the balloon festival and it was an event to remember.

My brother lives in Rio Rancho just a short ride away from where they stage. We went a few years ago, but it was a bit of a bust because it was too windy so only a few went up,

he sees more everyday than we saw that day.

Incredibly sorry to hear that. I really hope you have another chance and that the weather cooperates. I was there in my younger days, but I can clearly remember some moments that were almost magical.

Love it! This looks great!

Great job! It’s hard not to be critical of our own work. Even as we improve!