Custom gifts, why I love this thing

It’s the little things. Like being able to make a custom gifts with little notice.

Just got an invitation to a food party and I hate showing up empty handed to someone’s home for the first time. So why not pick up something and put it under the lazer?

So while at the store I picked up a bamboo cutting board. Created the graphic with the annual party’s name, date and hosts. Because it’s a “Bring it and we’ll fry it” party, I figured I’d have a little fun and add a meme to it. Don’t worry, i will also have some Mexican Scotch Eggs (Scotch eggs using chorizo) to toss into the fryer, instead of the cutting board. 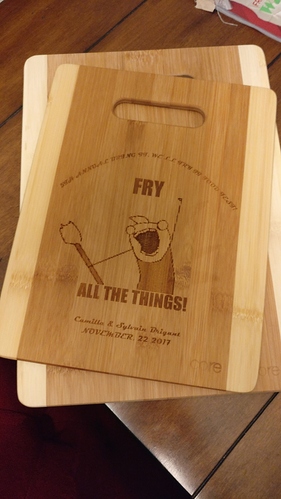 This thing almost pays for itself in gifts!

Between gifts and orders, it will definitely pay for itself.

What a relevant and special gift! I wonder how Scotch eggs would react to a laser…

So cool to be able to do this.

Did someone say cutting board? 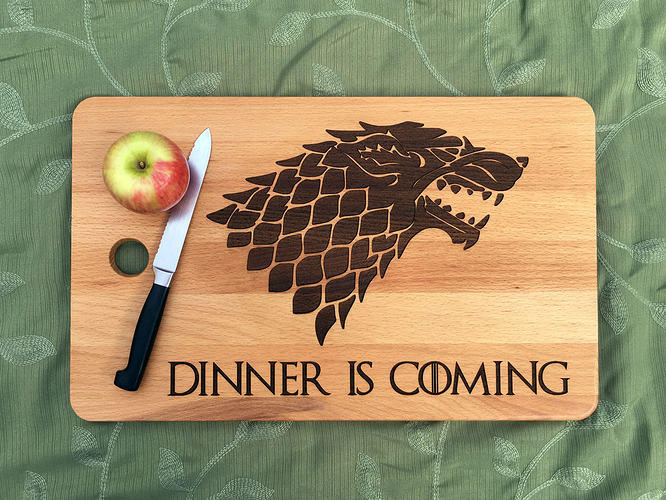 (Admittedly, the idea isn’t mine; similar ones are all over Etsy. I just made my own version.)

Love these!!! Thanks for sharing and they are so unique!

Will you bend your knee for the Cheese of the North?

The Mexican Scotch Eggs are all ready.

For those who may not know what a scotch egg is. It’s a hard boiled egg, wrapped in sausage, breaded and fried. These are inspired by our neighbors to the south. I wrapped hard boiled eggs with Mexican Chorizo (Not to be mistaken for Spanish Chorizo) and then coated with crushed tortillas chips. 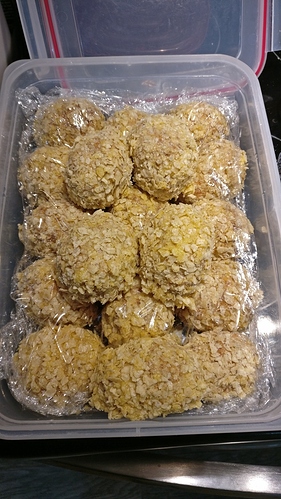 All I have to do now is present my gift for access to their deep fryers.

For those who may not know what a scotch egg is.

So a co-worker introduced me to them about a year ago. They are the greatest thing I’ve seen in a while. It blows my mind how the US hasn’t gone crazy over these things and they’re not everywhere. I mean, come on! It’s egg, wrapped in sausage, and then breaded and fried!

@Tom_A You aren’t all that far from the Pennsylvania Renaissance Festival. From August to November you can go there and get as many as you want! Also, Turkey Legs and most anything fried and on a stick

But yes, I also wonder why this has not gained in popularity. Thankfully, my wife makes these on occasion and it definitely fills that void in my life

You aren’t all that far from the Pennsylvania Renaissance Festival.

Indeed! I’ve never gone, but I’ve got several friends who go. Go for the mead, stay for the scotch eggs?

for the record. I accept Deliveries. I have hard boiled eggs in the fridge along with Chorizo sausage. hmmmm…

a delivery would be easier.

As someone who has a 2+ hour drive to get there…the turkey drum sticks are fantastic!

I’ve had them at Ohio’s Ren Fest. Sadly, they use such a mild sausage, that it barely tasted different that hamburger.

I’ve made them at home with a nice Italian sausage and those were fantastic!

@karzdan , have you tried them with a soft boiled egg? I tried that out of curiosity, and they are SO good with the runny yolk.

If you can make them yourself, try it with some Chorizo Sausage! The kick is fantastic with the egg and breading.