I work at a public library and convinced my supervisor and library director to invest in a Glowforge printer. We ordered it in December. Like most public buildings, we do not have any windows that open, so we also ordered the air filter so we could use it in our building. The air filter was on backorder, so we received the printer first in January. About a month later, we received the air filter and were able to test out the machine.

Within the first few usages, I noticed the machine was only cutting in the top left corner. As you moved farther to the right, the machine would cut and engrave progressively worse. I went through the different troubleshooting steps I found on website and didn’t fix the issue. See the attached photo for what I sent to customizer service.

I contacted customer service and was told that it couldn’t be fixed remotely and that I could receive a refurbished machine even though we had used the library’s machine for less than hour. I was told that it didn’t matter how little I had used my machine that I was outside their policy to receive a new machine.

I explained that we couldn’t test it safely because the air filter was on backorder and we didn’t access to a window in my building where we could safely vent it. Once we received the air filter we tested the machine and then contacted customer service. I was again told that it didn’t matter. That I should have transported the machine to a secondary location and tested it there. It is on me for assuming that I received a working machine and waiting to use it with their air filter.

My library has paid full price for Glowforge Plus and we have essentially purchased refurbished machine. I would be willing to accept this if we broke the machine or it was wear and tear, but the fact that we used the machine for approximately an hour and to be offered a used machine doesn’t feel ethical to me regardless of what the fine print says.

Has anyone had success in working with customer service or challenging this policy? I feel like I’ve been scammed. I have never used a faulty product and then have a company essentially tell its my fault for not realizing it was faulty sooner. 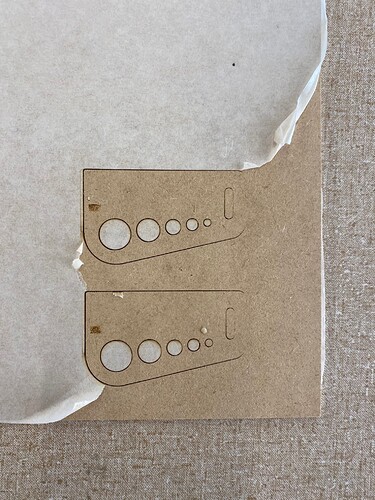 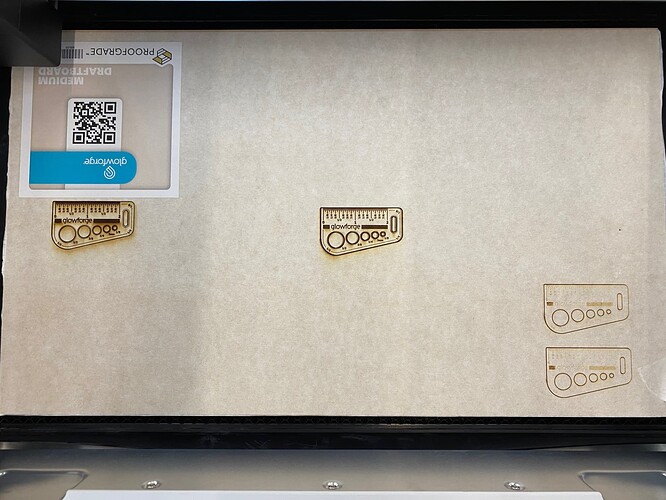 Be persistent, ask for an escalation, other users have received new replacements before. Good luck.

When the laser goes to the Print head from just under the siding on the right It needs to be very straight and the window that the laser goes through there very clean. If the beam is only slightly off straight. or the very slightest smudge on that window and the further the head is away the less power makes it to the head, and if the aim is just a couple of degrees off it will damage the left side of the head instead of cutting the wood.

As the beam is actually making it to the wood on the far right the angle is not that far off if at all. I have only had that situation once and even though it looked pretty good I found that cleaning it with the Zeiss wipe fixed that issue. If it is that which is causing the problem then that is the one thing a user can fix. If the aim is off then that can only be fixed in the Glowfotrge shop.

As it can take months for a repair to make it through the queue they have a system that the repaired machine with minor (and often no actual problems) gets sent out to folks that are waiting.

Legally this is a “refurbished” machine just as yours would be if someone else got your machine after it was repaired. If you waited months for your machine to be repaired it would not be different, though I would not know if it would still be legally “new”. How the bureaucracy works in the case of the library machine I am worse than ignorant but that is the reality.

One further note: MDF (draftboard or any PG “medium” plywood) creates levels of smoke and gunk that can kill a GF filter in as little as a few hours. “light” Plywood and solid woods, or any acrylic will let it last much longer, and things like Ceramic tile will take nearly forever to fill up a filter as nothing actually “burns”.

They also sell an open-cell foam filter in grocery stores that will stop bigger stuff and some gunk from clogging a window AC unit and placed inside on the top of the GF filter will do the same, and can be just washed periodically, getting just a bit more life from your filter.

Has anyone had success in working with customer service or challenging this policy?

only on social media.

My library has paid full price for Glowforge Plus and we have essentially purchased refurbished machine.

Normally this frustrates me when people say it. Most do not know actually how well a refurb is tested. It is standard for it to be tested at a higher level then new. But idk GF process and not sure if they are standard with that.

You are not the only one that feels that way. I wish I could provide more support and think you have a point.