Cut out instead of score oddity

New user here so this is probably something I’m doing wrong. That being said, i just did two jobs. The first was a die made over at Make a Box with some little skulls i put on the faces in illustrator. I uploaded it, changed the skull insides to engrave, the skull outlines to score and the side shape layer to cut. It printed perfectly but was a little loose so i headed back over to the Make A Box site, adjusted kerf and downloaded it.

I popped it back into Illustrator, literally just copied and pasted the skulls from the old file to the new one. They weren’t oriented right so i adjusted so that opposing sides added up to 7 like they should but made no changes to their color or layout. I uploaded it and set the layers just like the first job but this time, my GF cut out the skulls entirely. The kerf adjustment made for a perfect fit but the skull outlines just burned right on through. 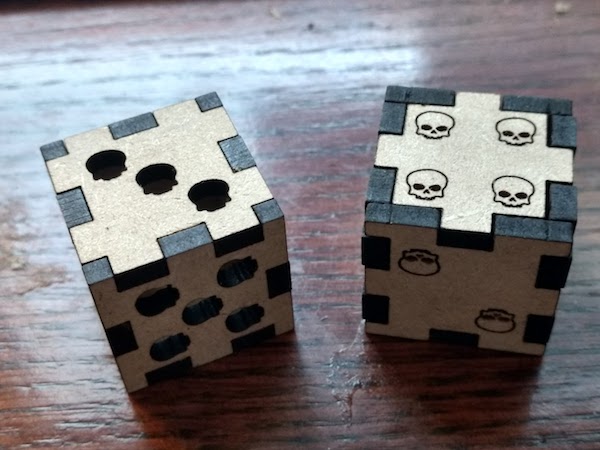 I just went back and reviewed the previous and current job to look for any differences and the only difference i could find was that in the first file, there was a big rectangle set to engrave that i set to ignore. it didn’t come out in the 2nd run but i can’t see how that would affect anything. 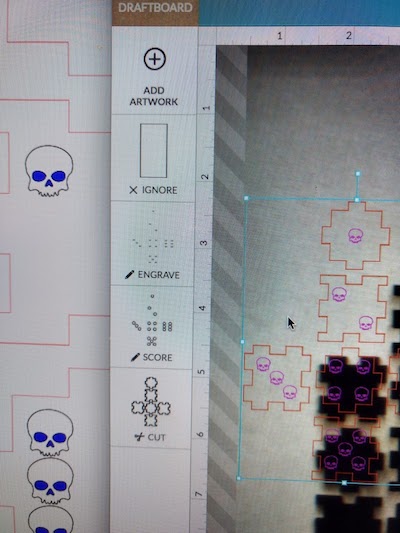 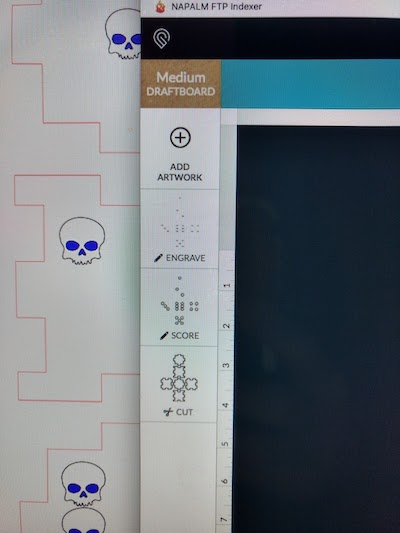 Did all of them cut through on the second run?

Any chance the skull outlines are duplicated and on top of each other?

Indeed, every single one burned right through.

That was a good idea to check for a duplicate layer. I just went looked but it appears to just be one. I moved stuff around and drew selection boxes just to be sure.

There was one other change I made. I noticed that the GF was doing two passes per segment on the 1st run when it was processing the last [cut] layer of the job. I went back and saw that the path width was 0.125 so i changed it to .001. But that wouldn’t affect anything on the skull outline layer would it?

Thanks much for the help!

Also, i rotated the 2nd job slightly to make it fit closer just to try and avoid waste.

That wouldn’t affect anything would it?

That is the focus (depth or thickness of the material) not path width if I am not mistaken.
If so, you told it that you were cutting paper.

you told it that you were cutting paper.

Meaning, it had to cut through that MDF first to get to the height of the paper.

The change from 0.125 to .001 was on the last procedure (cut out side shapes). How would that affect the inside (previous) steps? I must have missed something vital in the beginners tutorials.

Here’s a thought. If there was something under the material (left on the crumbtray from the previous job) that lifted the draftboard up, would that cause this?

I’m just racking my brain on this one…

I noticed that the GF was doing two passes per segment on the 1st run when it was processing the last [cut] layer of the job.

That is your answer right there. The PG defaults are set up to one-pass. If it is doing 2-passes, it’s because there are two lines. If you zip and upload the file, or share it via a private message, I’ll be happy to take a look at it.

I’m still not seeing how things like vector thickness and line duplication on one operation can affect the others. I’ve been re-reading and watching all the basic intro and beginner tutorials i can find to see what I’m missing here.

Thanks for the help!

In file 1, you have closed shapes making up the line segments. The height of these lines (that are actually boxes) is .0014", so it cutting nearly on top of the previous line, but not quite. 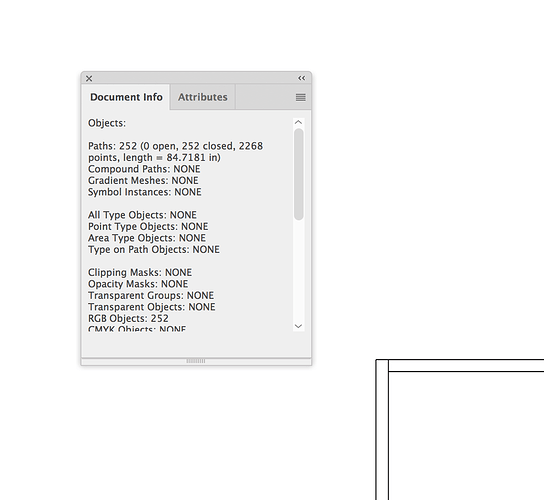 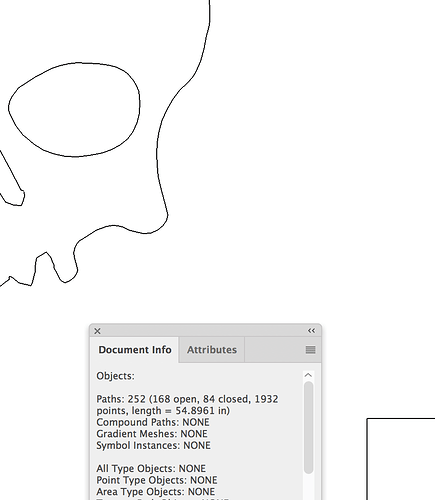 I assume when you say you changed the path width to .001, you changed the stroke thickness in Illustrator (not the material height or focus height in the UI since everything is showing PG settings still).

I’m still not seeing how things like vector thickness and line duplication on one operation can affect the others.

Line weight is irrelevant. The Glowforge always cuts the actual vector path, which can be seen in outline mode (Menu > View > Outline). Duplicate paths can and do matter because they are another set of instructions for the Glowforge to process. Two lines on top of one another will process twice. But, I don’t see that as the problem with the skulls.

As far as the mystery rectangle on the first file, it looks like it’s this little guy sitting on the corner of a box (the little tiny blue selection). It looks bigger in the thumbnail than the actual object is: 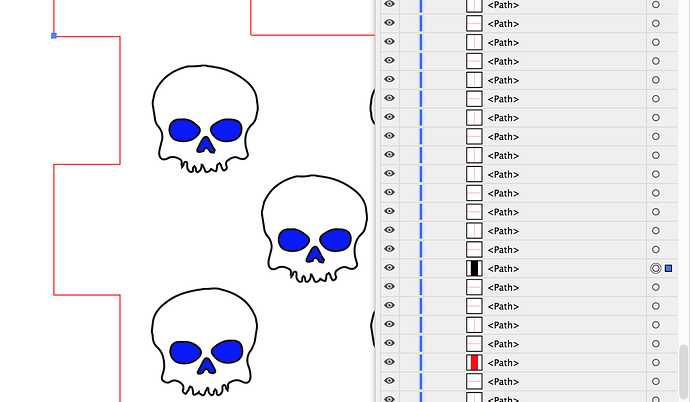 So back to why this managed to score through… are you actually using the medium proofgrade draftboard material, or your own material?

Good sir,… I owe you a beer. Or at least a freshly pulled espresso. I can’t even tell you how much this helps! It took me about three passes to process your explanation/analysis (as the caffeine is slowly taking effect here…

) but it makes sense now.

Just ran a third attempt and here’s what happened. 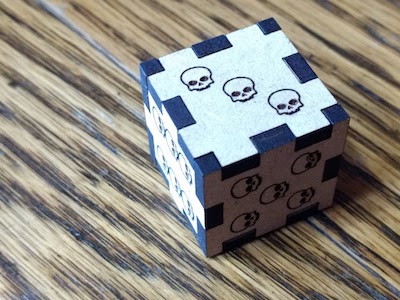 Thanks so much Jb!

Caffeine was still kicking in while looking at things ha. Not sure that I did anything to fix it though.

Just as an aside, from a design perspective, it’s best to give things either a stroke or a fill but not both. I noticed the eyes, which you wanted engraved, had a black stroke around them with a blue fill.

The basic rules of interpretation are:

I noticed the eyes, which you wanted engraved, had a black stroke around them with a blue fill.

This can actually be a good technique though - scoring an engrave can clean up the edges of the engrave and make it crisper and “pop”.

They need to be separate objects though. Or, to run the score after the engrave as a separate job. No?

I think it depends on how the design software renders the SVG. Sometimes I’ve had it show up as 2 ops - the engrave and a cut (which I change to a score) and other times one or the other. But I’m always bopping between AI/CD/Inkscape (although mostly in CD). I haven’t played with it in awhile and didn’t bother to figure out which software did which. Something I’ll add to my list of to-dos now that you mention it.

That is your answer right there. The PG defaults are set up to one-pass. If it is doing 2-passes, it’s because there are two lines. If you zip and upload the file, or share it via a private message, I’ll be happy to take a look at it.

Yes – had that happen once, and that was exactly the problem…

Thanks for your help @jbmanning5!

@Zihyer Thanks for posting about this. Your box turned out great. If you have any other questions, please post a new topic.