Not sure if this is beyond the manual, but has anyone cut 1/4" baltic birch? My only successful attempt scorched the sides pretty good. Settings would be appreciated if you have been successful.

I’ve had good results with 1/4 bb I’ll edit this when I get home and can check the numbers. It’s wide open and fairly slow.

Edit : looks like I haven’t cut any since we went to arbitrary speed. It is going to be around full / 60. As always with non

That’s what inspired the company to introduce ‘Proofgrade’. the adhesives in the ply can and will vary. Reminds me of ‘Dye lot’ when trying to match fabrics.
Once you dial in your settings for that material, you are good to go, but tests are really the only way to be sure.
So you have a choice of writing it down in a notebook, or editing the name of the file in the UI and include the settings.
I bet you’re having fun!

FWIW I’ve been having consistent results so far with the box of Woodpeckers 3mm BB ply from Amazon. It seems to takes masking quite easily, too.

Good to know. I’ll have to get some. Have you tried any 6mm?

Maybe proof grade was a necessity? GF is selling mdf labeled as plywood so maybe the basic can’t punch through 1/4" baltic birch.

Then again, there is a good possibility this is Marine grade which probably has different glues. I have bought both in the past and they look very similar, so both are laying around my shop.

Love that stuff. After

3mm is my go to. 5mm works great for heavier things as well.

Bought in quantity it is not that much more than draft board.

I have cut 1/4" with no issues, in fact I have cut 1/2 into 3/4" oak full power as slow as it would go as a test. Technically, it is plywood by virtue of having a veneer on both sides, three ply - just not what we would normally think of when hearing ‘plywood’.

Yes, technically it is plywood.
I must have marine grade if you and others have cut through 1/4" baltic birch.

Well, I cut deep into that oak but it was a nasty burned up cut. One trick to cleaner cuts is multiple passes and hack your way through it. Manual cutting gives you up to 3 passes, but s long as you don’t move the material you can run the file again and make all the passes you want.

Spare a thought for us internationals who will get one pack of proof grade to let us know how easy life is with it and then will never be able to economically order it again hehehe.

I did that last night.

I should have tested but just ham fisted it by using Full/120 and ended up needing 3 passes for 100% cut through on all of the pieces. Some of it was cut after 2 passes.

I should run another cut calibration to see what the real number is.

I must have marine grade

From what I’ve read on other laser forums the glue in marine grade plywood makes laser cutting it a mess if it cuts at all. I was disappointed.

I’ve done some 6mm (1/4") bb plywood. I’m using 140 speed at full power. I set it for 2 passes. Most of the time 1 pass is enough, but there are spots in the plywood that seem tougher to cut, hence the 2nd pass. And sometimes, even 2 passes is not enough in some spots.

The sides are pretty black at the end, but I wipe them down with some water using a paper towel.

I mask the plywood with cheap painter’s tape, so it’s only the sides that blacken. The top looks nice.

It’s not great, but it’s good enough for my purposes. The 3mm is much easier to work with.

Great info. Thanks. I need to buy some more samples.

I’ve cut some 5mm bb that I had lying around, and the settings were way more than twice the woodpecker 3mm stuff. So yeah, do the tests.

the settings were way more than twice the woodpecker 3mm stuff

That’s because most of the difference is in the inclusion of more non-wood layers. There are more glue layers which are incredibly variable in cutting (and the knotty wood that can be used on internal plies that wouldn’t be on the exterior layers are a problem sometimes too). That’s why twice as thick requires more than twice the pew pew. Until you think about the disproportionate impact of the additional glue layers you scratch your head and it’s non-intuitive

Using very different settings with my pro. 115 -120 speed with 70 power. I might up the speed a tad . Any lower power and it just bottoms out. 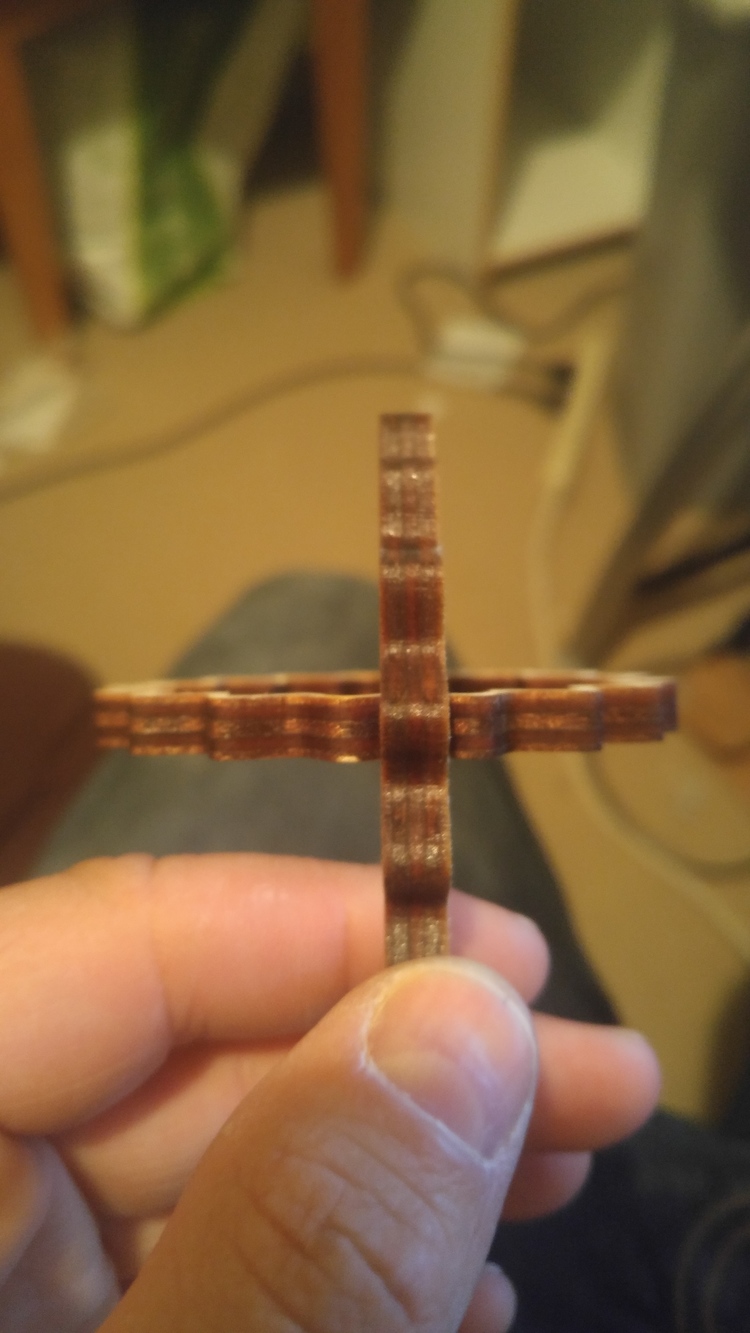 I have only cut the 3mm BB ply. I start with the medium maple ply settings and adjust downwards from there.

Thanks for this. I started with 120/70 on https://community.glowforge.com/t/my-baltic-birch-adventure/11978 and you saved me a lot of time! I tried a few variations up and down to see what I could get away but that was a great start.