I have a project where I repeatedly need to cut Dyneema (that’s the name of the material) lines to about the same length.

I helped myself with the following jig: 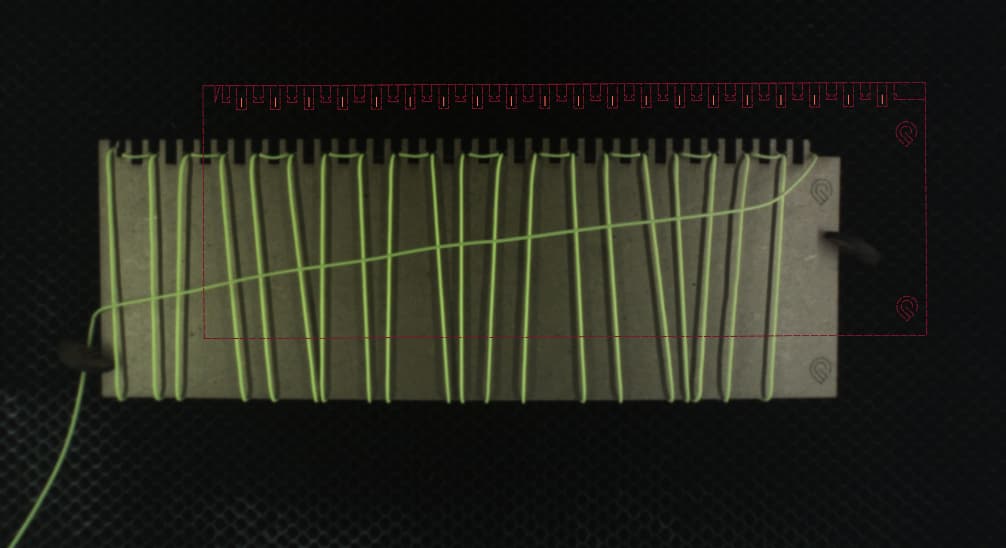 I use Snapmarks to align the cut on the line and have the teeth aligned so that I don’t cut into the jig.
While I’m somewhat proud of how I solved the problem, I was wondering if anyone here faced the same task and has found a more elegant / efficient solution than mine.

You can’t just wrap the line around the wood and cut a straight line cause then the line would move immediately after the cut, releasing the tension, causing a mess. Also, the Snapmark alignment takes a lot of time for a repeating job. My jig holds the lines pretty well, so they stay put, but it also takes some time to wrap the line around the teeth and also to remove them.

Let me know how you do it.

Never heard of this material but back when I was working a lot with composites - CF, Kevlar and fiberglass - I had a dedicated set of shears, but also a cheap guillotine that I had picked up at a yard sale then “tuned up” to cut cleanly.

I used a fair amount of what is called “tow” which is a carbon version of a ribbon, composed of dozens or hundreds of individual strands. I would tape it to the bed of the guillotine near the cutting edge. It was cleaner than the shears because they tended to “push” the strands away as they cut.

Anyway, I think if the material cuts cleanly on the laser, you could tape it down close to the cut line, then it wouldn’t move (much) when cut?

shears because they tended to “push” the strands away as they cut.

Servicing industrial sewing machines, I learned to sharpen the ‘knives’ on them. The blades bypass like shears, and to tell if they needed sharpening you took a single thread and by hand, slowly rolled the machine so the blades came together while watching the thread. The thread should cut instantly without moving. If the thread was pushed at all the blades needed sharpening.

I think a hot knife is what we used for Dyneema. I think your solution would probably work fine.

Yeah, a hot knife is the standard to cut Dyneena.

My question is not about „is it safe?“, but „how can I cut in a more efficient manner / larger quantities in less time?“.

Sorry if I was unclear about this. I mentioned the material only so that there no mixup between a thin rope and the connection between two points in a vector software.

What if you wrap the threads around one piece of 1/8” material then pin that piece down on the crumb tray with another sheet of material on top leaving just a bit of the thread wrapped piece exposed and run your cut on that exposed bit? If it’s all pinned firmly and you cut close to the top piece your threads shouldn’t jump.

Because not every head camera has the capability, and it was never a promised feature.

Maybe not a promised thing, but then throw it under the premium subscription. I think that would be a huge draw to the subscription.

But, that said… all systems can use the camera calibration, which are basically Snapmarks, no? So why not Snapmarks?

Probably because the calibration is only expected to be within 1/4".

With snapmarks, I can score the same design and not even tell it was done twice. I shared a pic of that here at one point.

Then why can’t a person buy a head camera that will work with Snapmarks? Is it just a crapshoot? That seems like a decent upgrade. I’d pay for it. $400-500 to get Snapmarks or upgrade to them.

I just have lots of questions about why it works on some and not others.

I don’t recall on the beta, but I thought pretty much everyone had success with them. It was probably a support-heavy feature though…

We can only speculate.

Unfortunately, i missed out on snapmarks too. I guess because you can’t have it it makes me want it even more

My Grandad was a sewing machine mechanic, he had his own business and also used to buy and sell a lot (industrial), he was amazing! Thanks for giving me a nice flashback

My Grandad was a sewing machine mechanic

You ought to see the guts of a buttonhole machine circa 1950, there was one old guy who could work on that thing. Nightmare of cams and adjustments that seemed endless.

The machines I worked on were sergers, one speed - the fabric was thrown off of the table they were so fast.

for me too, I hadn’t touched on that memory since it was imprinted.

You ought to see the guts of a buttonhole machine circa 1950, there was one old guy who could work on that thing. Nightmare of cams and adjustments that seemed endless.

Yes he would be that guy but I know he worked on all kinds of machines. He used to talk about them all!

@mathias Knowing that the

can’t cut through tinfoil, it might be possible to wrap the length around a piece of tinfoil wrapped cardboard that was just larger than 1/2" the length you needed - then run a cut down the middle.

Then why can’t a person

I believed Word Perfect was better than Word in so many ways, but they stopped supporting the software so, once I had a problem, or needed to install it onto a new machine I had to move on.
Pretty sure Snapmarks is only grandfathered because of the screaming, and knowing the audience the

is sold to, would you want to let people know it was still available when you had no intention of ever updating the software again and weren’t training new employees on it?

The Camera Calibration takes every machine I’m aware of, to within a WAY smaller margin than 1/4", and that’s the direction they’re going with. They’re working to make point-and-click a reality, and Snapmarks isn’t that.

WordPerfect! I used to be an expert in that software, even having some articles published in the WordPerfect Magazine. I hated when it was phased out. I think it had better features than Word, especially the technical macros I used to create. Word has macros, but there are neither as easy to set up or to use. At least not that I’ve found.

The only thing I know about Snapmarks is what I’ve read here on the forum. My machine doesn’t have it, so I don’t quite understand exactly what it is or the advantage of it. Guess it’s cause I’m more of a “hands-on learner,” so just reading about it doesn’t help me.

Recently, I exchanged my machine with Snapmarks for a new machine without. I am currently running an old previously-done-with-snapmarks print-and-cut sticker job that I aligned in the GFUI using fiducial marks. There was even some minor rotational adjustment. I’m on the fourth sheet and, they have all been more accurate than the last run with Snapmarks.

I am still reserving judgement on whether I would still use Snapmarks but, so far, it’s not looking like I need them anymore.