Dealing with inconsistencies in plywood

Hey guys! I am having what I am calling “blow outs” in several of my ornaments I printed earlier. I ran to the shop threw my material in there, which was 1/4” plywood homedepot. after it was finished, I scooped everything up, jumped in the car, and now as I am getting them out to paint I am seeing chunks of the middle of layers missing. Not the top or bottom layers, just the middle. Is this from the wood? From my settings too high or to fast? From no masking? Or something else? Also… is there anyway to salvage these? Maybe clay or putty being puttied in the holes very carefully ? Obviously I couldn’t sell them. But maybe they could be given as gifts or something or as tags on gifts. If they don’t look too bad. If there is even a way. 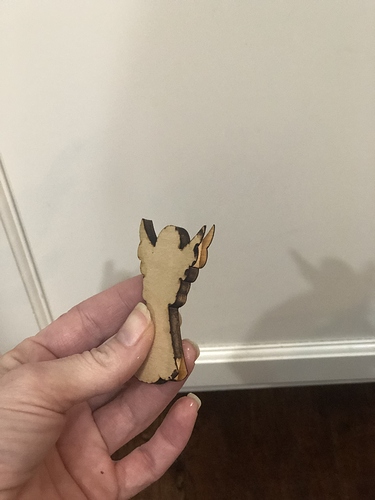 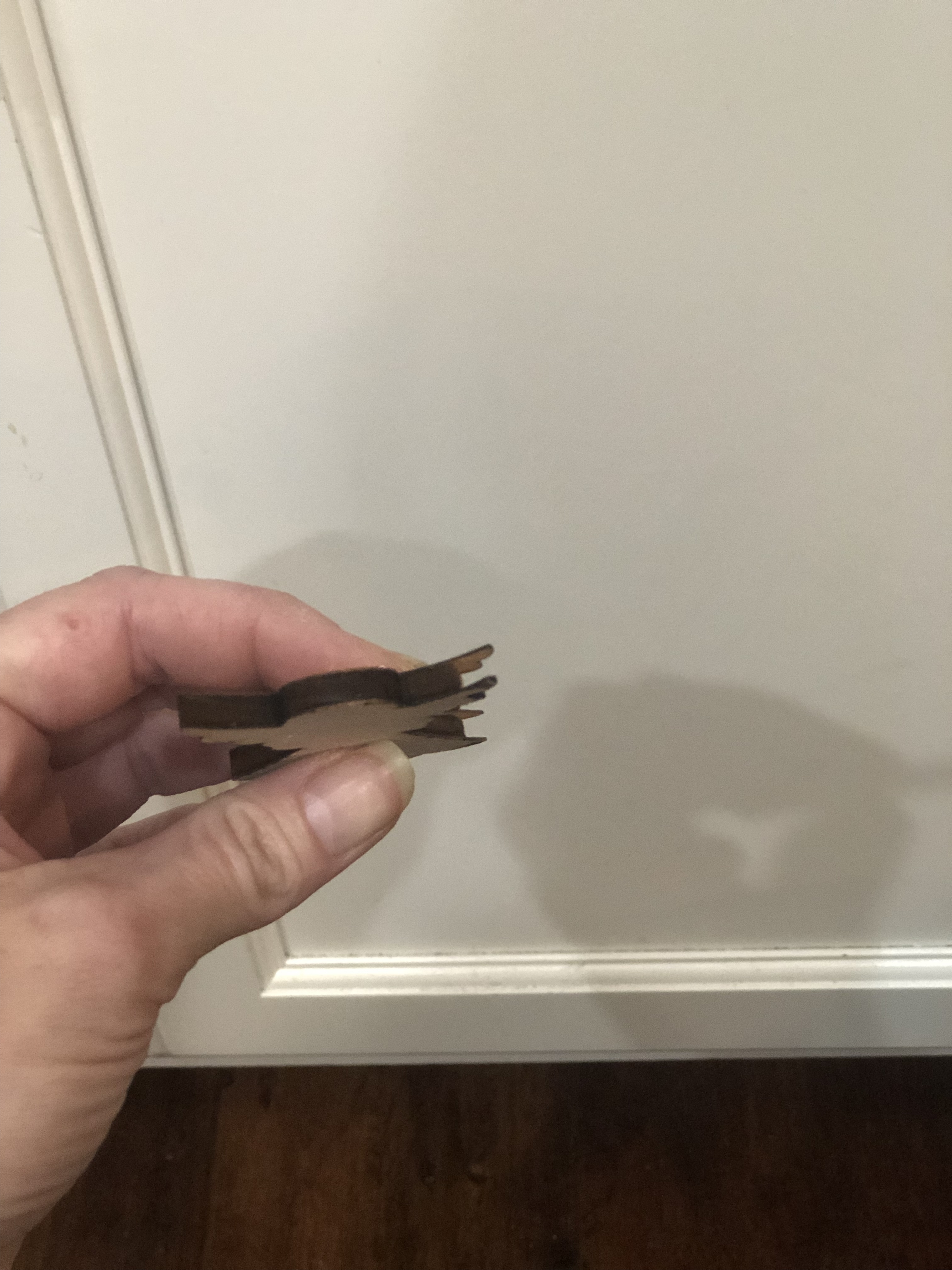 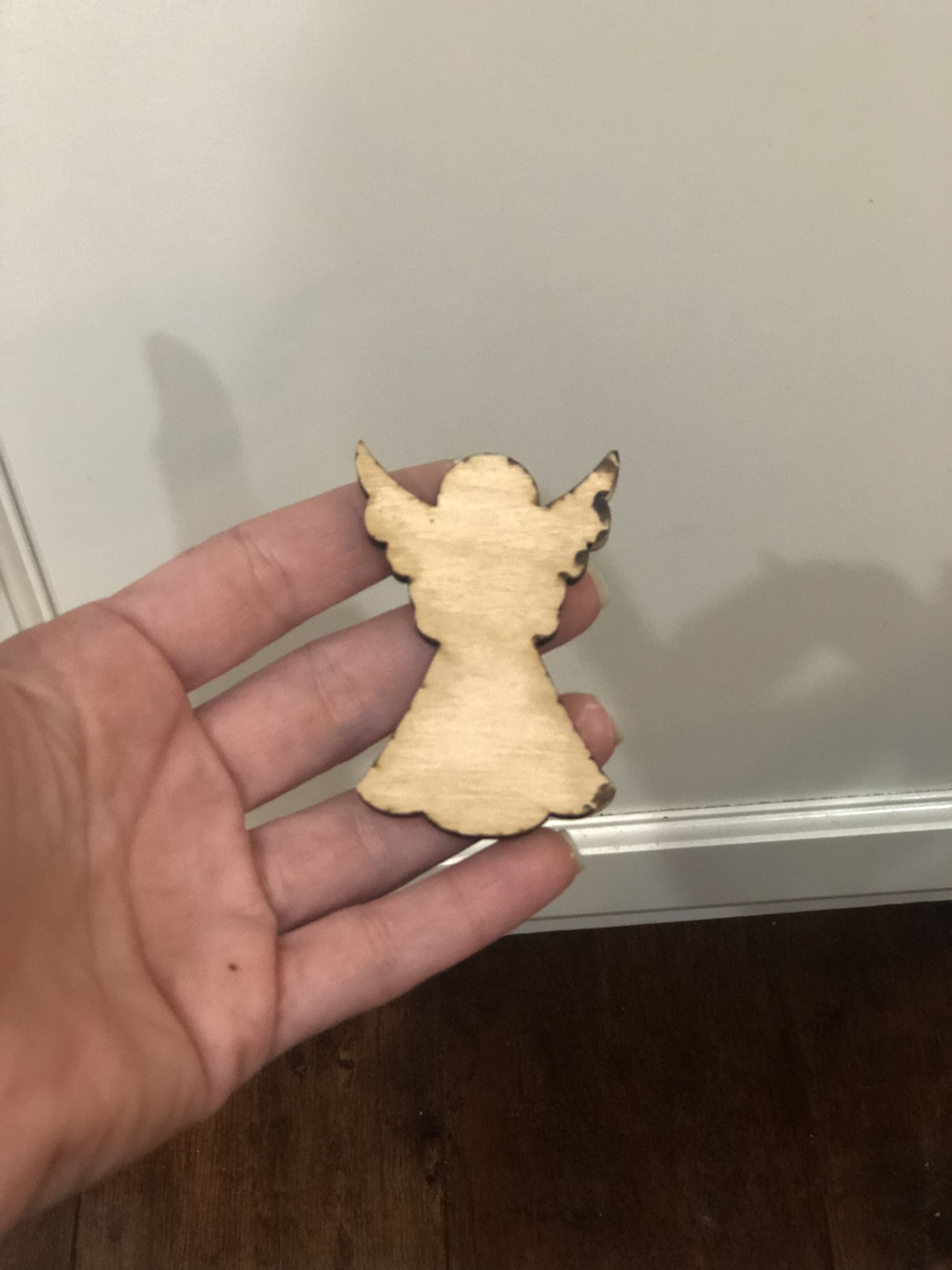 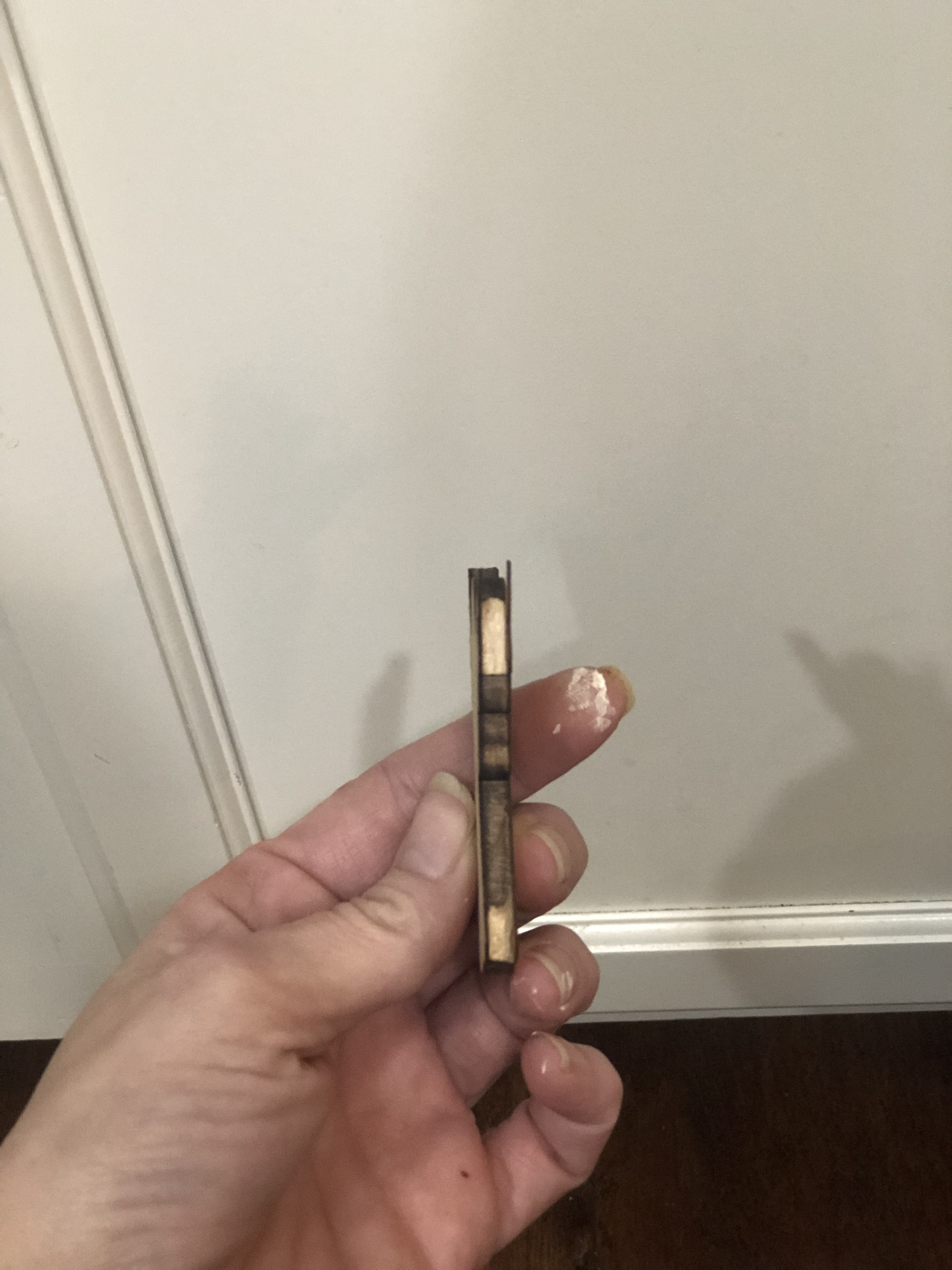 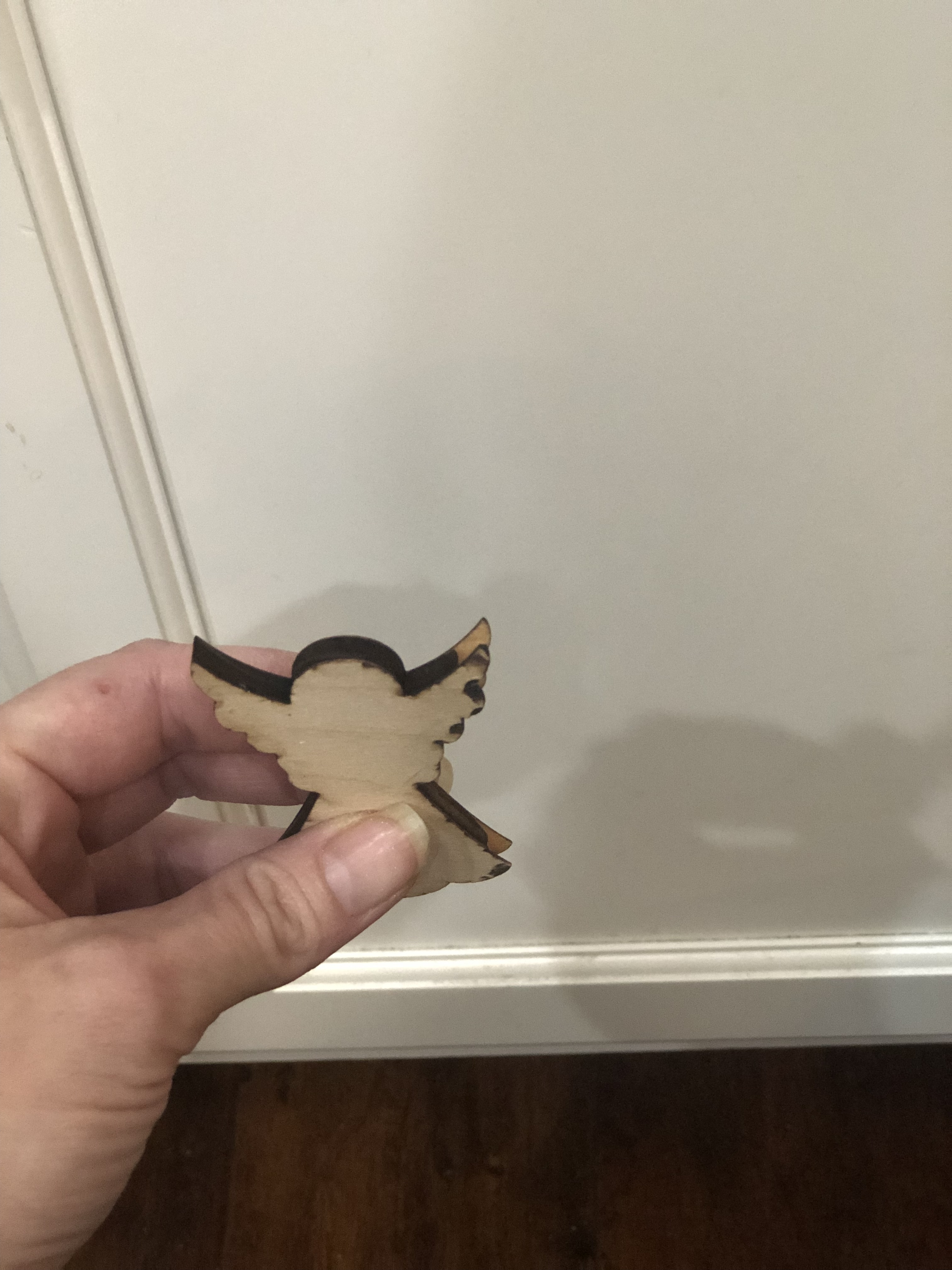 It’s the wood. Plywood can have all sorts of different fillers and glues in it, and voids aren’t uncommon.

Baltic birch is higher quality and will be more consistent. It’s not supposed to have voids, etc. in it.

Home Depot is actually marketing some plywood now that’s intended for laser cutting. I haven’t tried it yet so I can’t personally vouch for it, but it sounds promising. If you use “Glowforge” as a search term on their website it comes up.

This is exactly why sometimes I don’t mind the extra cost of PG material becasue it can be so hit and miss with regular plywood. Honestly, I think it would be a waste of time and effort to try and salvage them. It’d probably be a lot cheaper to just start over.

Maybe clay or putty being puttied in the holes very carefully ?

Wood putty is often used when putting the plywood together and even when it is just different in the laser’s ability to get through it is the bane in working with the stuff, but sometimes it is near impossible to cut. I would much rather go back and add it after than try to cut through it.

It comes in several colors that match various woods but the yellowish oak blends in most. It dries very quickly and can appear to turn into a rock but I have brought it back with hand sanitizer, The hold appears to be mainly mechanical and that is fine in most circumstances filling tiny cracks but I might soften with a bit of wood glue if filling large “blowouts” such as you are finding.

Here is where I first encountered the need of it

Woodchucks Sale Everything Else

My Woodchucks butternut Lion was definitely bugged. I was using tape masking but thought it was ok. Perhaps not so much. any suggestions out there. perhaps a big game hunter would want it? [IMG_20181017_133741]

I didn’t want to just toss the ones I printed. Just because of the effort, really. Rather than cost.

it takes a whole 10 minutes(atleast) of having a Mandy to Mandy talk, in order to get me hyped up to get two toddlers dressed, and in the car, alive and well and still have enough mental capacity to do anything that is not 100% life or death! !! Haha! So you know what my cry baby self did?? I stuck my hot glue gun in the holes. Filled them up with glue. And let them dry. Then, Painted over the edges. And turned them into gift tags​:laughing:

To help avoid this in the future, if you hold the sheet of plywood up to a bright light, you can see the voids and mark where they are so that you can avoid them while cutting. It doesn’t solve the void problem, but you can know where they are and not be surprised/disappointed when the print is done.

Those a pretty big voids for sure. As @jonathan.forst pointed out, using a back light can assist in seeing problem areas. Here is @evansd2’s good illustration of this.

Having a picture to remember this advice always helps.

@jonathan.forst and @marmak3261 Am I having Deja vú? Or have we had this conversation before? I honestly don’t think I have ever had this problem before now. But I could be wrong because when I read you two comments, I have either read something very similar or have had a conversation of such with you guys! Either way! You refreshed my memory. Because I forgot that there for a few days at a time— I was holding a flashlight up to my plywood. I will have to remember to do that next time. I know this sounds cheap, but I filled my blow outs with hot glue, turned them from ornaments to tags, painted over the dry glue, and called it a masterpiece!

Wasn’t me. I have only read others’ comments about this. Sometimes it all seems like a blur. I do have to catch myself at times, responding to something and then realize that I already said it somewhere else to the same person.

Sometimes it takes several tries to break through.

Hey guys… what would you guys use this for? I know the description is clearly written there. But I am not a math expert. So I am not sure exactly how this would be used. But it looks so cool! 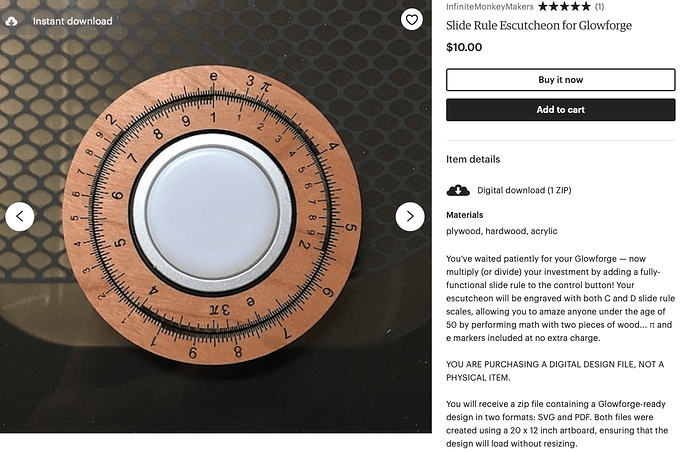 It’s a slide rule. It’s what we used to use for doing complicated calculations before calculators were invented.

it just looks so cool. But I just can not justify the 10 bucks not knowing how I would use it.

Here’s an even cooler one, for free: Ancillary Mode (an escutcheon)

Multiplication and Division for those two scales. Place the Inner ring number “1” under the number on the second ring to be multiplied. In the case shown it’s about 2.7. Find the second number to be multiplied on the inner ring. For example if you wanted to multiply 2.7 x 2, the number on the outer ring above the inner ring’s 2 shows about 5.4, which is the answer. Someone used to using a sliderule (in this case a circular slide rule) could quickly and easily multiply the numbers to an accuracy of 0.05

Can also be used to do divisions by placing the numerator above the divisor and looking on the outer ring above the inner rings “1” to find the answer. It sometimes takes a little practice, usually just common sense, to understand where to place a decimal point.

It sometimes takes a little practice, usually just common sense, to understand where to place a decimal point

This is one of the most underappreciated things about sliderules. You had to be able to estimate and understand the likely range of the answers to get the decimal point. I’m appalled by how often I see people with orders of magnitude errors in their answers to things who have no clue the answer just doesn’t make sense. Blank looks when you ask how it’s possible and then you have to explain they’re off by a factor of 10 or 100 and they want to know how you could know that.

Heh - I didn’t want to comment and resurrect your old thread, but I’ve found that the lights from the

itself are plenty to identify voids! I just hold it up over the closed lid and mark issue areas with a sharpie

ha! hey thanks! With that bright light looking right at me , Not once did I think of that after all of the wood I have been going through and checking since then, marking it ahead of time so that I don’t forget. Thanks!

Hey Thanks, @rpegg. You wouldn’t be able to bet your last bottom dollar on it (or not even your 1st dollar of your 599 billion dollars), but I was a math/algebra/geometry/ WIZ I was always at the top of my class. I loved it. When the teacher would begin a new lesson, I would take off. Not even needing instructions on most lessons, and finish everything there was to do. By doing so, I tortured myself, I would get so miserably impatient waiting on the next lesson to start. My teacher hated it. And after all those years, I just knew it would all just come flowing back to me while helping my highschooler. It was actually the opposite. None of it ever returned. Not a drop. I know my simple basics quicker than some. Eehhh, maybe most. But thats it. I have definitely lost every ounce of my math skills. It is definitely not like riding a bike for me. It actually embarrasses me sometimes. Just knowing how it once was. It is sad. Same with Spanish. It took two years. I spoke it fluently. I can understand what most say. But have a hard time speaking. I get my point across.

Not knowing how to use a sliderule just means you are younger than 65. Sliderules only have nostalgia going for them. When I try to calculate Sin(x) or square root of a number I stopped reaching for the sliderule in 1972.