Hello. I have a few custom names I set up using the ‘+’ when setting speed and power. I would like to delete the ones I no longer need. How can I do that?

Select the trashcan in the upper right corner. 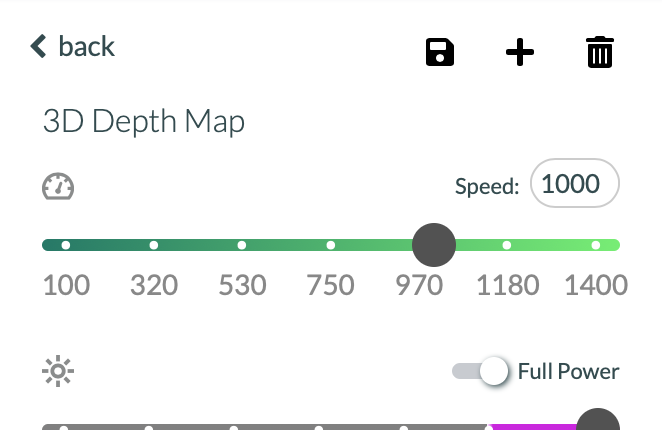 Universal language. One day all will morph into hieroglyphics…

Yes, who was it that tried to copyright a trash can?

I guess garbage heap and dumpster fire did not have the same panache.

Wheelie bin may be more appropriate in this day & age.

Our local council were the first in the UK to invest in wheelie bins when they had a surplus of £100,00 at the end of the financial year. That was 1982 and despite all the criticism at the time, “they’re plastic, they won’t last five minutes” etc. some of the original ones are still going strong.

A bit off topic, but worthy of a mention perhaps?

Yes well politics and infrastructure are a bit different on this side of the pond. Back in 1960(?) my father as director of public works put street wheels on those trash bins and towed them around behind a pickup truck in a “mother duck and ducklings” fashion and the big truck would show up as needed to empty those. Thus only one person would make the long trip to the land fill and the “Duck Train” was able to actually pick stuff up during that time getting twice as much done. Perhaps someone from Tucson can chime in it they still do that, but as far as I know it was never picked up anywhere else.

Even back then the Phone co phones lasted forever and did not need changing. Now, even if it is not blown apart by the battery they will change the software so you have to buy a new one, So it is not surprising that folk expect that plastic will fall apart, as that is now common experience. But that is not necessary as the very long useful plastics from even the 1950s is available when things marketed to other than consumers. If folks bought their own they would not last 5 years.