Domestic Lasering - How does your house smell?

I’m mainly just curious here. We installed our GF out in the garage. We vented it out through a window via a home-made, gasketed, wooden blank with dryer shroud also with an inline 4" duct fan pulling. The end result is a light smoke aroma inside the garage. No actual smoke and not enough to be a nuisance but, personally, more than I would want inside my house. I’m about 30 min into an hour long job out there and it’s getting pretty strong.

That being said, I’m wondering how it works out with all the GFs I’ve seen set up inside of offices and even inside houses. Are you all using filters and, if so, does it completely remove all smoke smell? I’m not considering moving it inside but I’m wondering if anyone started with it in the house then later moved it out or has done any setup changes as a result of smoke production inside the home.

We heat with wood pellets, so there’s always a bit of smoky smell to our house this time of year. I haven’t noticed it being any different/stronger since the GF arrived, for whatever that’s worth. From what I see in the forums, people are pretty successful at venting their units well enough to keep the smells at bay.

For my own part, I’m not really worried about a little bit of woodsmoke scent. It invokes early childhood memories of my grandma’s house, so it’s not something I find objectionable.

The first time I cut acrylic I found myself transported back to memories of my dad’s workshop in my later childhood. I had forgotten all about his forays into plexiglas construction until then! Smell is really a powerful memory trigger. It’s the only sense that doesn’t get filtered through cognitive brain processes before being passed on; olfactory signals wire directly into the brain stem where your subconscious / primitive / instinctive responses originate.

I broke down and purchased a HEPA filter. I’d been needing it anyway.

i bought one of these small HEPA air filters when it was on sale for $30. figured, what the heck, it’s just $30. it does a pretty good job of taking the smoke edge out of the air in my office.

doesn’t do it immediately, but i turn it on high when i cut and then back down to low when i leave the office. next time i go in, i don’t smell anything.

I’ve wanted AK-Forgey7 out in my garage but I hadn’t setup my venting or electric for it by the time it arrived. I had 2 years to get it done but kept putting it off. When it arrived last week, I set it up in our office with the hose thrown out the windows a good 3 or 4 feet. Well, winds blow and the smell crept into the office and out into the front of our house. My wife “encouraged” me to get the venting done in the garage and move it out there.

Yesterday a friend came over and we installed the new vent and moved the GF to its new home. Out in the garage, I didn’t get any of the smell until we would open up the forge to get the materials out. The venting worked very well. I might add another fan into my venting just to be able to continue to vent longer and help pull out a bit more smoke/smell after the GF fans wind down.

Forgey7 is much happier out in the garage though and my wife is much happier with it out there as well. We spent 4 hours next to it last night some Easter egg doodle art a friend of ours made. The friend was blown away that I could put her b/w drawings on the bed of the GF, scan it and then start engraving & cutting. She was completely blown away by the pieces as they came out of the forge. The engraving on some of them really added life to what she thought were some pretty boring pieces!

I added a booster fan and can now cut acrylic without my shop smelling like a nail salon. The sideyard, though… 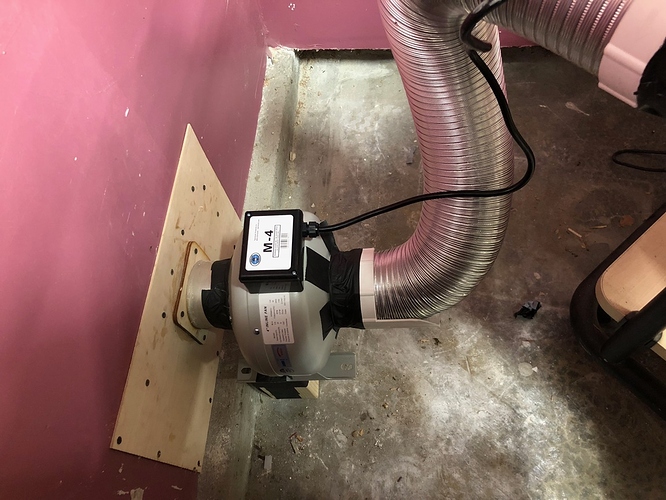 Mine smells pretty strongly when in use. I have a booster fan (went out of my way to get a “sealed” one) but I still have a mystery leak somewhere. It could never be in the living area of the house like this. I have it in the basement, and fortunately, the odors don’t really escape the basement.

I also invested in a giant air cleaner (this one) so that hopefully within a short time after running a job, the particulates and VOCs can be reduced to a less dangerous level.

There are plenty of people who claim that they’ve achieved zero smellz, and I’ve tried pretty much all their secret incantations with the exception of remodeling the room to shorten the duct length, and so far I can only assume their noses don’t work.

I’m venting outside through a window using just a board and a 4" PVC pipe. The hose from the GF attaches to the pipe. The board isn’t a perfect fit for the window, so I have a bit of cardboard filling the gap. This creates a little seepage back in through the window.

During engraves and scores on wood, I hardly notice it at all. I can smell it a little during a cut. Where I get the most odor is opening the lid. That being said, I don’t dislike the smell. Actually, when my nephews come over, they make it a point to stick their heads into my hobby room because “this room smells awesome”.

If I was doing acrylic a lot, I might feel differently about it. However, I enjoy the mild smell of burnt wood. Just need to convince the GF shop to carry sheets infused with the smell of good pipe tobacco.

No problems here. I’ll catch a whiff of a smoky smell when the machine is off and I walk past it within a couple of feet - that’s the residue on the grid. Haven’t found a really good way to clean that off. The rest of the machine is maintained pretty well, with occasional wipe downs to remove the residue buildup, so it’s really not that bad. It doesn’t even bother my hubs, who has a nose like @chris1.

The only time I’ve had smoke in the house was last night when I asked hubs to listen to something and he walked around and without thinking pulled the exhaust hose off while it was running a job. (And opening the lid shuts it down, so that was only for a second or two after I got over there.)

In my case I think it’s a combination of a defective nose and good luck. I have it vented through a dryer vent stuck in a piece of cardboard I stick in and out of a window. No foil tape, just vent clamps. I do smell it every time I open the lid (especially to insert material for the first job.) I can also smell it on my hands for hours after I’m done and I wash my hands a lot during the day. But I smell pretty much nothing during a job. Yesterday I did 2.5 hours of engraving painted draftboard and many sub-five minute cuts and engraves on proofgrade plywood and veneer. I didn’t smell anything, but the whole house smelled strongly of mushroom omelets, breakfast links and pancakes all afternoon. So that could be a solution.

I’m waiting on some things to do proper venting, so I just have the hose run out the door right by the machine.

I am already dead of cancer, and posting from beyond the grave.