I saw this idea once a long time ago on a postcard. Covers all the best stereotypes! 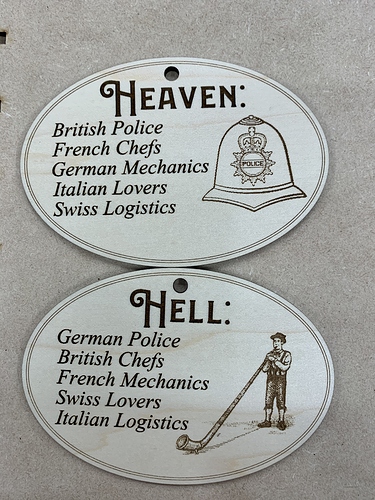 Now that is funny Reminds me of this:

“I speak Spanish to God, Italian to women, French to men, and German to my horse.”

Little known fun fact - French food was basic and bland until the man who would be Henry II married an Italian (in the 16th century) who brought with her a number of the top chefs from Northern Italy.

And then there were the pastry chefs from Vienna for the Viennoiserie. But the French did perfect it all with the amazing croissant.

. But the French did perfect it all with the amazing croissant

Actually it was the French in Brittany who perfected it with Kouign-amann. Although croissants were the predecessor needed to prove the technique

I hadn’t heard of that until Chef John from foodwishes.com. I’ve been thinking about trying them out in the new year.

My wife won’t let me make them. Whenever I come across a fundamentally superior food I attempt to replicate it until I can do it at least as well as the source. But then we have no reason to go back.

So these & gelato are off limits from experimentation