I finally got my Kiwiforge up and running and got to play with it all weekend so I decided to make a few versions of some minimalist earring holder/organizers. Both need a lot of tweaking but I’m pretty over the moon for my first attempt at designing for the laser. 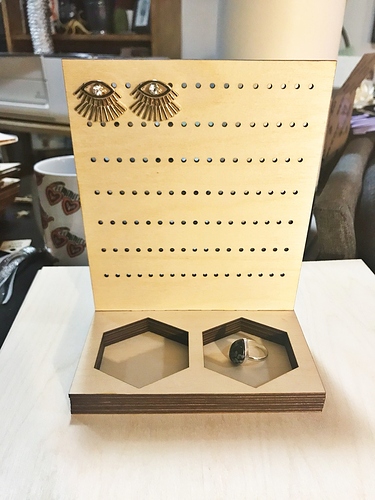 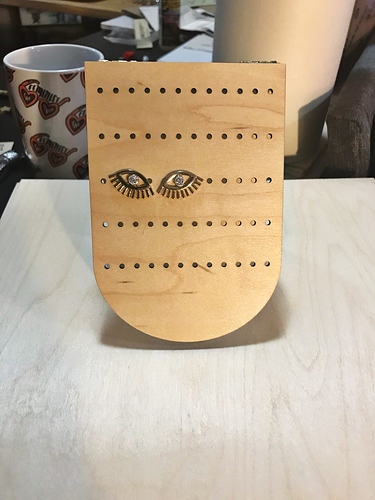 ) because I can never get those teeny tiny bits on the earring backs right.

As much as I love this machine I do have to say that there are a few things that I feel like were oversold by the GF marketing team because I have never used a laser and wasn’t sure what to expect (which, of course, was pure ignorance on my part.) The first is that in the initial video you see the GF in kitchens, offices, living rooms, other places in your house and I (again naively) thought it would be fine in my living room (I live in a tiny one bedroom apt) unit the air filter arrived because my studio/workspace where I want to use it doesn’t have a window. Um, no. IT IS FREAKING LOUD. And unless the air filter is over the top incredible, it’s pretty smelly. I would never suggest to anyone I like that they should keep this in their living room, kitchen, etc. The other thing is that I scoured this forum for safety tips (because I am a naturally anxious person) but I feel like the safety reading in the manual was not written for an average joe like me.

That being said, those are (partially) my own fault for not doing much research but still things that I think are issues that someone should address at some point. The machine itself is incredible and everybody who has seen it in action is blown away so I’m pretty excited to work on my next projects!

Great design on the stands.

(Make sure you have your venting completely sealed - you shouldn’t be getting any smells except when you open and close the lid. I sit about ten feet away from mine all day and the smell is non-existent when the lid is closed. Throw the masking into a closed ziploc asap to cut down on the resin residue odor.)

They are noisy though.

Hm! Good advice! I think I might have to double check my seals on everything because it smells quite a bit. Also, thank you for posting corrugated cardboard settings a while ago - those were a lifesaver!

Something for the ladies

Looks so nice! Should I be offended that even though I have several earrings that this isn’t designed for men?

Well, shooooooot, you’ve got a point. Should have called it “something for anyone with pierced ears!” Next up I’ll do an enamel pin holder and I’ll make sure that one is gender neutral.

Hm! Good advice! I think I might have to double check my seals on everything because it smells quite a bit.

Foil tape (from Home Depot in the same area you will find the dryer vent hose & connection kits) will help a lot. Make sure you tape every connection and if you’re attaching it to any straight pipe section, run a strip or two down the seam as that’s not airtight as designed.

I was worried I’d have to make yet another run to home depot but I just found some of that foil tape at home and it’s working wonders - thank you!

Nice work!
The noise doesn’t bother me at all, since the pre-release was a lot louder.