Actually it’s just a prototype, but it occurred to me that as sturdy as it is, you could hang it out for a season and then just toss it and make a new one next year instead of cleaning it out.

(And it’s a good re-purposing of Proofgrade delivery boxes.) 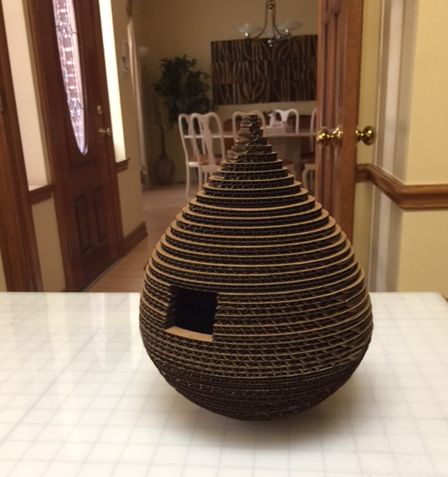 You mam, have a fertile mind.

ROFL! Not sure how to take that.

(It’s a raindrop. I saw enough of them over the last couple of weeks to be triggered.)

I need to make something like this for our sparrows. They’re sweet, beautiful birds and they come back each year … but they’re making a huge mess of the side of my house

Lol, I didn’t even think of the double entendre.

There’s a bird called a Weaver Bird in Africa that makes a nest shaped like that - I’ve always thought they looked cooler hanging in a tree than little boxes for the birdies to live in.

What did you stick it together with?

@Jules that is another great project, and I agree with

You mam, have a fertile mind.

and yes I think both of us mean that in a positive way.

I also think, if you sprayed it with a water based acrylic it would hold up really well outside.

That would probably work for a normal environment.

(Not tropical - I couldn’t use it here for instance, we probably get too much rain on an annual basis.)

And I’m not going to hang it anyway - four cats. That would be…not something I want to deal with.

Oh gosh @jules, I love it! This might be my favorite of your designs! What a perfect use for cardboard; I like it better than the Glowforge Globe!

Love the idea. Love the design. Love the execution.

Oh no…I’m gonna be buying that globe lamp for sure!
(When I grow up I wanna design that way.)

Sweet. Gotta start thinking about how to do those easily. (Mmm, just had an idea for an openscad module.)

This is just elegant! I love this, Jules!

Surely that globe is one of the designs Dan intends to give us for free.

Either way, it will be mine. (We get a nice credit to use on goodies.)

I believe he’s said anything that was in the promotional video that ends up in the catalog will be included for free.

Not sure how that"s going to work since it can’t readily be made from Proofgrade. At least not with my wallet. They have mostly distanced themselves from designs with other materials.