Emblem of the United Nations

I found the Emblem of the United Nations on wikipedia and thought it would be interesting to try making it out of two materials since I hadn’t done that yet.

I made these with

medium clear acrylic and medium maple plywood and just uploaded the logo and asked glowforge to cut it out automagically. 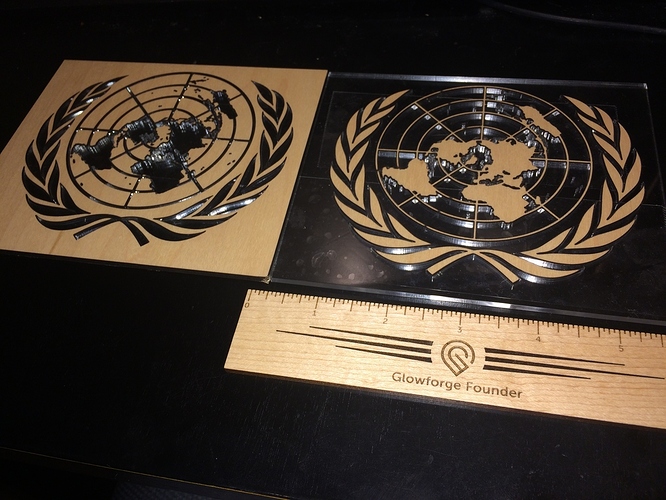 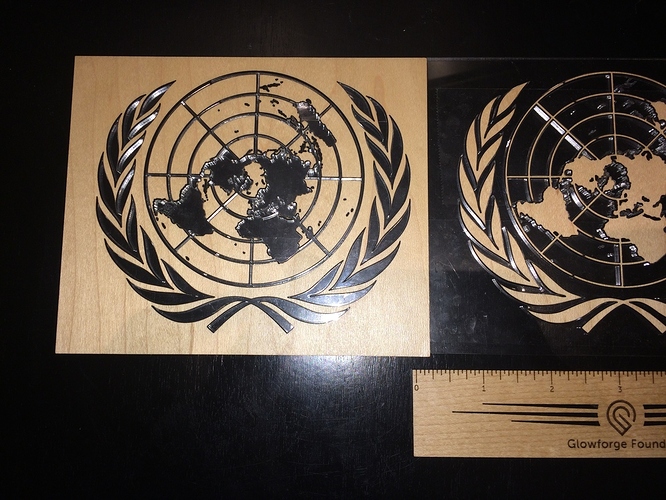 This was my first project where I would have to actually care about the laser’s kerf, but I chose to make no allowances for it and just see how well it worked. All of the pieced slotted in nicely, but it definitely needs something to hold it together. I’m currently improvising with just packing tape on the back, which looks pretty ugly since the tape holds my fingerprints better than the acrylic. Please don’t steal my identity.

One surprising thing I learned here was that I can’t trust glowforge’s automatic cutting… Nope, scratch that, I can’t trust random SVGs on wikipedia to be good. Whoever made that SVG apparently left some odd line crossings in the middle of some of the lines of latitude that I didn’t notice until now. Please forgive my lack of faith, glowforge.
Anyway, that made weeding the cut out globe a bit more fiddly than I would have liked because the structure was pretty fragile, but once everything was in place it was ok.

I think the best part of this is that the acrylic and maple are different thicknesses. While that was surprising to me at first, it later came to grow on me. The wood stands out in relief from the surface of the acrylic and gives it a nice feel .

My advice to anyone else that tries this is to increase the size a lot. Many island nations were lost today due to being indistinguishable from crumbs or from disintegrating when I was trying to weed them.

You should also use this fixed up SVG instead of the one from wikipedia.

I can’t trust random SVGs on wikipedia to be good. Whoever made that SVG apparently left some odd line crossings in the middle of some of the lines of latitude that I didn’t notice until now. Please forgive my lack of faith, glowforge.

This tends to be a pretty consistent truth for Internet-sourced files. Designing for screen or print is way different than designing for cutting. Shortcuts don’t work so well on the cutting side.

You planning on selling carbon credits or something?

Cannot begin to imagine why anyone would need a UN signage.

Just curious. If it is a black-op, top super grade secret mission I would understand not saying.

I needed some signage to help get in the right mood for practicing delivering an ultimatum to the UN. They need to know I have a fully operational laser and I’m not afraid to use it to get what I want.

Wouldn’t the united federation of planets logo have been a more suitable choice for lasers?