Engraved a couple of the boards from the playset they were putting up for our grandchildren: 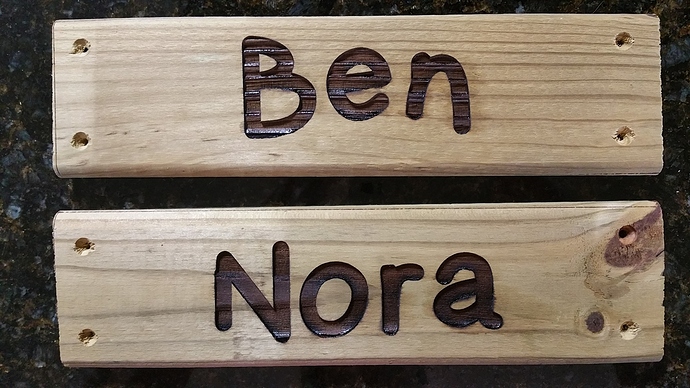 Cut and stained some boards, added some silk flowers, then cut Nora out of Proofgrade Medium Basswood. Really like the contrast. 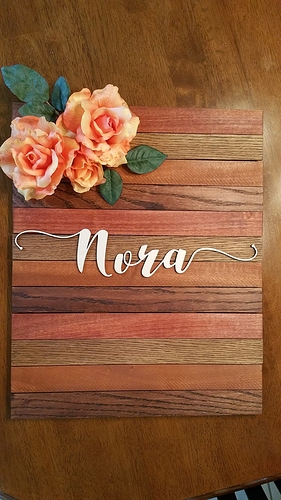 Pretty! I only get maybe 6 “likes” before I run out again, even when I haven’t been on the board overnight, so I’m already out of them, darnit!

I know the feeling! Why should there be a limit to likes?!

Nice way to personalize the play set. I like the contrast of stains on the birthday sign,

Oh, those turned out nicely! I like the idea of personalizing the playset too!

I love the signs! Especially the Nora on planks—very cool coloring on those, and such a lovely font.

That’s fun! Now I kind of want to pry some boards off our playset and engrave them with fun things!

Ok, this is the second thing I’ve seen you make where I have the same dumb question… How do you make the swirlies on the first and last letter??

Not a dumb question … you just don’t know the answer yet!

I used a font that has “swashes”. The font was a freebie from CreativeFabrica.com back in March. When a font has “swashes” you have choices for each letter in the font character map. So, in Nora … I chose one with a “swash” on the “N” and on the “a”.

The whole thing only makes you want more fonts!

Here is an example from DaFont … take a look at where this one shows an alternate first and last letter to get the look.
https://www.dafont.com/magnolia-sky.font

Thank you so much! I figured that you must be really good at adding swirlies by hand ( which I tried by the way. Didn’t work so well)

I predict that in five years, magnolia-sky will take its place among those great fonts that by their ubiquity have doomed them. Since I first loaded it last winter, I have seen it everywhere. It’s a fetching font and so useful for projects like this.

Not being snarky at all. Just pointing out that this font is getting some steam.

Magnolia Sky is a nice one! I’ve always loved fonts … love them in wood even more!

I’ve had the same thought about Magnolia Sky. Happy for its maker, but sad that popularity will eventually drive it into oblivion!

Maybe it will be the “vintage / retro” look of my grandchildren’s time.