I’ve never engraved it myself, but I did purchase one from one of the other members here, and the white appears to be normal for that kind of engraving: 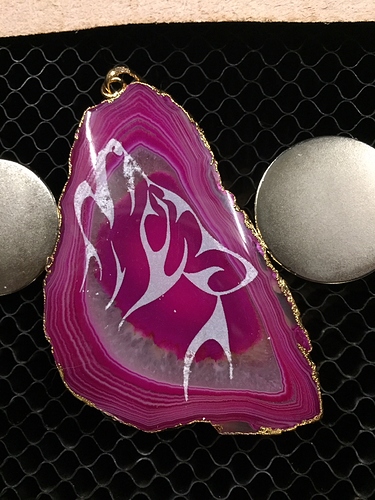 Also, apparently you need to watch the striations in the rock - they will fracture differently.

yes that is what I’m finding. this is just what laser engraving does on polished stone

I just don’t understand why the white color is what is frustrating… even with researching the subject. you would (logically) think the laser etches away the polish leaving the natural unpolished color of the stone.

you would (logically) think the laser etches away the polish leaving the natural unpolished color of the stone.

I think what’s actually happening is millions of little microfractures. As such, it appears white.

I’m engraving polished agate and my vision was that it would leave the color of unpolished stone… instead it is white?

In my experience agate always gets bleached white when the laser hits it. This happens at fairly low power levels, far below what would be needed to actually etch away at the surface. Some of this may be due to the dyes being bleached. (Most agate that isn’t brown has gotten its color from dyes.) But it happens on undyed agate as well, so @Tom_A’s idea about micro fracturing might be right.

You’ll need to experiment with other types of stones if you want one that doesn’t turn white.

I believe so as well. If you brush at them they can flake off.

If the white is caused by fracturing, wetting the stone might change the appearance temporarily back to the color it was. If it’s bleached, it will stay white.

The good news is, if it’s not bleached, you might be able to use something like clear nail polish on it to change the appearance again.

Just something to experiment with.

yes it seems, thank you

do you mean wet stone before I engrave? the clear polish did dull it but once it dried it was bright white again…

No, the wetting test is done afterwards, just to see if it fractured.

You could maybe try brushing it out with a wire brush. (Might damage it though, so check it on a spare.)

If the white is caused by fracturing, wetting the stone might change the appearance temporarily back to the color it was. If it’s bleached, it will stay white.

I just tried this with some blue (dyed) agate and it stays white.

What is the unpolished color? In my (limited) experience it’s just a lightened version of the polished color, because the rough surface reflects differently. I bet if you engraved some kind of speckle pattern you might get close…

This is true. I tried various different ways… and I think this is just gonna be white! I’ve been able to dull it, though… using low power then brushing with a wire brush.

I wonder if a thin ink like an alcohol based such as from Copic pens could flow into the cracks and provide some pigmentation yet easily wipe away from the finished surfaces.

That’s a good idea. Before I give up I’m going to go to hobby lobby and see what I can dredge up. When the fragments are wet it’s exaclty what I’m looking for. So just need something to set in those fragments… you are right. TY

When the fragments are wet it’s exaclty what I’m looking for.

CA glue in the design to keep a wetted look maybe? Or bartop resin. Or try mineral oil but that would dry over time.

Actually, an alcohol based color pen @ihermit2 recommended worked like a charm!